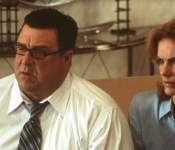 There’s a scene in the movie Storytelling where John Goodman is sitting down for dinner with his wife and sons. After the middle son says something inappropriate, Goodman boots him from the table. As he gets up to leave, he drops and expletive and storms off. After a silent moment, the youngest son remarks, “it’s not fair if Brady can say the f-word and I can’t.”

One might well bear this in mind when looking at the colour content of Theme Decks. Sure, limit your search to modern times and you might be luttled into a false sense of equality. For the fourteen decks of Scars block, Blue and Red are represented six times each, while the other three colours five- a fairly even distribution (especially if you count the colour for mono-coloured decks twice, once as “primary” and once as “secondary”). For Zendikar, Blue, Red, and Green each are in a half-dozen times. White trails with 5, and while Black only gets four occurrences, you can make a case that they are offset by the fact that Black gets its share of the limelight with not one, but two mono-coloured Decks (Rise of the Vampires and Fangs of the Bloodchief). Let’s not forget that every Core Set deck from 7th Edition through Magic 2012 have a perfectly balanced colour spread, and even the new Event Decks have given every colour its day in the sun.

But if you were a Green mage back in the early years of Preconstructed Magic, you might have a very different tale to tell, one of prejudice and marginalisation. Sure, Green had a say in the first-ever Theme Decks release, pairing with White in Tempest’s The Swarm. Thanks to the introduction of the Spikes- one of Tempest block’s new synergistic tribes (the other, of course, being the Slivers), Stronghold would be sure to have a Green deck as well for The Spikes. But come Exodus, there was not a Forest in sight. Meanwhile, White had been included in five different decks.

Over time this historical imbalance would be addressed, and those same Green mages might well take heart that their beloved colour would attain relative parity with the others when you look at the number of occurrences in all Theme Decks/Intro Packs from Tempest to Innistrad (it’s only second-last then with 76, pipping Red by one and only lagging behind the frontrunner White by three). Still, if we hold up Theme Decks to be exemplars of the themes and mechanics of the given set or block they hail from, it does make one wonder why it seemed that Green brought so little to the table. As we’ll see in today’s deck, it had some very intriguing rare cards which could make for wildly differing gameplay experiences.

Our Duty to Endure

The Swarm has a fitting name that accurately describes what it’s trying to do. If there was any doubt, you only need look at its makeup- containing twenty-six creatures, it dwarfs the beater content of the other three Temepst decks which clocked in at the 16-18 range. With all but a pair of these coming in at the two- and three-drop range, The Swarm wants to overwhelm its opponent in the early-to-mid-game transition, before they can set up their own win conditions. It does this by focusing its creature allotment on efficient, aggressively-minded attackers, and its few “utility creature” slots are filled by mana dorks or tappers- both of which while not aggressive themselves help keep the blade keen.

In the two-drop slot, we begin with a full playset of Muscle Slivers. Essentially a Grizzly Bear with upside if you manage to get multiples into play, these might be a risky play against The Slivers but solid against most any other opponent. A pair of Soltari Troopers attack as 2/2’s as well, but with the benefit of shadow. Their vulnerability is their 1-toughness in a resting state, which like most every shadow creature means its easily exposed to pingers and burn. The utilitarian half of this drop slot is comprised of a trio each of Master Decoys and Skyshroud Elves. As mentioned above, these are not in and of themselves aggressive, but they enable more effective plays from the deck. With mana ramp, you’re able to churn out your creatures that much quicker, flooding the board with them. Master Decoys can tap down your opponent’s best defender, improving the effectiveness of each attack. And for us gamers of a certain age, there’s often a certain nostalgia that comes with Phil Foglio art.

The other half of your slam sandwich comes in the three-drops. A trio of Trained Armodons are your largest body here, efficient 3/3’s for three mana. Pincher Beetles have the same high power, though are quite fragile for toughness. Still, their shroud means that your opponent’s going to have to contend with them in combat, and they’re quite likely to take something with then when they go.

A pair of Ranger en-Vecs are a little more sturdy, thanks to their first strike and regeneration. It shares its power level with the Rootwalla, but instead of the regeneration it becomes hardier in combat thanks to a pump effect, making it even bigger than the Armodons. Finally, the Soltari Crusader shares the Trooper’s evasion, but can hit even harder thanks to a repeatable power-pumping effect. It’s not cheap at

per activation, but decks with lower mana curves often benefit more from having mana sinks- it gives them something to do after their hand has been expended.

At the top of the curve we have a pair of unusual creatures which can really have an impact on a stalled board. The Elven Warhounds don’t seem all that intimidating as a 2/2, but they are impossible to kill in combat. Any creature attempting to do so quickly finds itself put back on top of the library, costing its owner both tempo and a turn. This means that your opponent will almost always let the Warhounds through, since blocking them simply makes it harder for them to draw an effective answer. Beward, however, if your opponent is playing with creatures that have beneficial enters-the-battlefield effects, as you might be doing them something of a favour by attacking.

The Krakilin, on the other hand, abandons such finesse plays and focuses on sheer brawn. As big as you want it to be given the constraints of your manabase, it scales with the game and is a welcome draw nearly any time. Its regeneration makes it even more nasty and persistent, and it can quickly close down a game if you’ve managed to make it large enough.

With so many of its card slots devoted to creatures, there’s less to see here in the form of noncreature support, but even here The Swarm manages to pack in some surprises. Chief amongst these are a pair of rare Green enchantments, Aluren and Recycle, which can have a dramatic impact right away. Aluren lets you drop almost any creature you have right into play, for free and at instant speed. It’s a card you have to be careful with, since it lets your opponent do the same, but this is a case where you can make the symmetrical asymmetrical with the right preparation. Remember, you have more creatures available to you than any other deck in the entire Tempest block (though The Spikes comes within one), and unlike your opponents you’re able to funnel nearly every one of your creatures through it. Contrast this, for example, with an opponent playing Flames of Rath– not only is he or she at a numerical disadvantage (Flames has 18 creatures), but a great many of them cost four or more mana. Played with caution, Aluren is a conditional powerhouse, and can set up a lethal ambush if you empty your hand at the end of your opponent’s turn, then Overrun before you attack.

Recycle is a card-advantage engine, pure and simple. You skip your draw phase, but any time you play a card you get to draw a card to replace it in your hand. This is offset by the fact that your maximum hand size becomes a mere two cards, but here’s another advantage of a relatively cheap, creature-heavy deck here: you don’t have a lot you’ll want to hold on to. Although it costs a whopping six mana, this card can give you a shot of nitrous to power over your opponent at the ending stages of the game. And if, perchance, you manage to land both Recycle and Aluren, you should be able to vomit a good half of your deck onto the table in fairly short order.

From there we have the more pedestrian effects we’d expect to see here in a White/Green combat deck. Elvish Fury is a slightly weaker Giant Growth, but offset by the fact that it comes with buyback. You also get a second buyback option with Anoint, which is a damage-prevention spell. The former is very strong, but the latter is a little more slow and reactive than you really want for a beats deck, and note that by modern Gatherer wordings Anoint targets, meaning it can’t even help keep your Pincher Beetle alive. 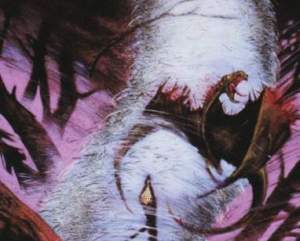 A trio of Pacifisms comprise your single-target removal suite, and Needle Storm– although very conditional- is murder against flying decks. There’s not a lot of that on tap in Tempest, though it’s a beauty if you can catch your Slivers-playing opponent dropping a Winged Sliver. You also have a Disenchant for artifact and enchantment removal. Finally, you get a solid pair of Overruns, game-ending cards which can steal games virtually out of nowhere. The perfect complement to a creature-heavy strategy, you can expect to ride to victory on the back of them fairly often.

Overall, The Swarm looks to perform as advertised. A high creature count clustered around the affordable two- and three-drop slots, backed by some solid closeout support should see this deck do quite well. We’ll put it into play and get its measure, and return in two days’ time with the results. See you then!