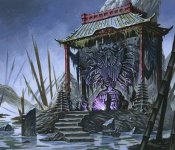 It’s our opening matchup for Champions of Kamigawa, and today I’ll be up against Jimi and her mono-White Way of the Warrior. Will her Samurai prevail, or will they face the divine wrath of the kami?

On the play, I lead with a Forest while Jimi naturally plays a Plains. Next turn I land my first creature- a Dripping-Tongue Zubera. Jimi’s content with some equipment in the form of a No-Dachi and passes. Next turn I attack, and the turn after that when she has nothing.

By turn 4 I have the creature advantage, swinging in again with the Zubera to take Jimi to 18, but I’ve now missed my second consecutive land drop. Jimi’s hit hers right on track, so when she lands a turn-4 Devoted Retainer, she’s happy to equip him with the No-Dachi then and there. Next turn I’ve hit my hand limit, and not having drawn a land am forced to discard a Venerable Kumo. Back to Jimi, she swings for 3 with the Retainer to take the lead, then plays a Mothrider Samurai.

My land woes continue on turn 6, which sees me pitch a Honden of Life’s Web. Jimi attacks for 5, then adds a Konda’s Hatamoto. I’m down to 12 life and am pretty much circling the drain at this point. On turn 7 I draw and play a Hana Kami, then follow next turn with a Soilshaper. Meanwhile Jimi’s chipping away at my life total. On turn 8 I start to chump off my critters, and fold shortly thereafter.

I open the next match with a Swamp as Jimi leads with a Devoted Retainer, which begins whittling me down. I’ve kept a two-lander with a Kodama’s Reach, so I’m feeling a little more confident this go-round. By turn 4, however, I’ve failed to draw another land- again stuck on two. I play an Ashen-Skin Zubera and pass. Back to Jimi- who again has hit her drops in a disturbing repeat of the last game- lands a Mothrider Samurai after an attack that’s left me at 17 life.

Now turn 5, I’m forced to discard, tossing Dance of Shadows into the graveyard. Jimi swings for 3, then adds a Kitsune Blademaster. I pitch a Soilshaper. Jimi swings for 5 and I chump the Zubera, forcing her to discard a Plains- and that’s about as good as it gets for me. I’m done in on turn 8.

Looking to change my fortunes, I declare myself to be on the draw this time. Although I don’t relish the prospect of giving Jimi’s aggressive deck an early jump, Kami Reborn’s woes might be somewhat mitigated by drawing first. We begin turn 1 with land drops, then Jimi follows up with a turn-2 Konda’s Hatamoto. She follows again next turn with an attack and another Hatamoto as I hit my land drops and play a Kodama’s Reach. I drop a Swamp onto the board (giving me two of each type), and pull a Forest to hand. 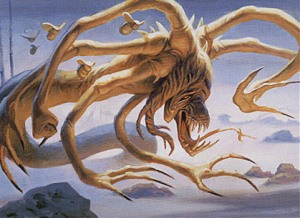 Now turn 4, Jimi adds a Bushi Tenderfoot after a 2-point swing which leaves me at 17. Back to me, I play a Venerable Kumo and pass. Next turn Jimi attacks in again with the pair of Hatamoto, but I block one of them with the Kumo to go to 16. She then adds a Mothrider Samurai and ends her turn. Thanks to solid land drops and the Reach, I’m able to deploy Iname, Death Aspect. I head for my library, depositing a spectrum of Spirits into my graveyard but taking care not to take too many. In go a Hana Kami, an Ashen-Tongue Zubera, a Soilshaper (given my abundance of land, a good option), a Thief of Hope, and a Gibbering Kami, covering converted mana costs of 1 through 4.

Jimi shuts down Iname immediately on turn 6 with a Cage of Hands, then attacks for 4 with her Hatamoto and Mothrider. I again block one of the Hatamoto, but still take 3 damage overall. Jimi adds a Devoted Retainer and passes. I follow up with a Kami of Lunacy, relieved to at last be deploying some threats. Alas, it does not long remain one as Jimi drops another Cage of Hands onto it next turn before attacking with her Hatamoto, Mothrider, and the Devoted Retainer. I block and kill the Retainer with my Kumo, but can’t avoid going down to 9 life. Back to me, I summon the Burr Grafter and a Kami of the Hunt, stabilising my defenses.

Jimi swings in again on turn 8, but this time I’m better prepared to withstand it. I block her Retainer with my Burr Grafter, then put the Kumo in the path of the Mothrider. After declaring blockers, I pop the Burr Grafter (which would have traded with the Retainer thanks to bushido) to pump the Kumo, letting it scalp the Mothrider Samurai and live to tell the tale. Thanks to the Grafter’s soulshift, I’m able to return the Thief of Hope to my hand from the graveyard. Jimi plays a replacement Devoted Retainer before ending her turn. I then add a Long-Forgotten Gohei, which turns the corner for me thanks to its +1/+1 bonus across the board. I then deploy a Kami of Lunacy (to replace the one Jimi has put in the Cage), and pass turn.

Jimi adds to her board presence on turn 9 with Samurai Enforcers, but holds off on the attack. I play the Thief of Hope and pass. Next turn Jimi gives the Enforcers protection from Black with Blessed Breath in a desperation ploy, but only ends up two-for-one’ing herself as I gang-block the Enforcers with my Venerable Kumo and Kami of the Hunt. She kills off the Kami, leaming me the Kumo. Over to me, I play a second Venerable Kumo before swinging in with my Kami of Lunacy in the air for 5 after syphoning a life off her with the Thief of Hope. Jimi’s now at 14- with me at 8.

Jimi’s Samurai are now circling the drain and Jimi knows it- she’s given the Kami too much time to entrench, and now with soulshift my stream of blockers will be unending. Knowing the gig is up she sends in the ground troops on turn 11, but three get eaten by my Spirits and I’m left at 7 life. I fire back for 8 with a Kumo and the Kami of Lunacy, putting her to 6. Her turn 12 is a blank, and I come in again next turn with the flying Kami. Although she goes down to 1, she’s managed to topdeck a Reciprocate and solves the flying Kami problem.

Now turn 13, Jimi gets a late pass with Takeno, Samurai General. I draw a Pull Under and cast it, killing off Takeno and winning the game off the 1-point syphon from the Thief of Hope.

Let’s not be too harsh on Kami Reborn– I do have to put my hand up and say that perhaps those weren’t the best keeps in the first two games, and I might have given a thought to mulliganing. On the other hand, it says something about the deck that a two-land hand should be almost automatically suspect. Indeed, Kami Reborn is a harsh and unforgiving master when it comes to its mana costs. Here’s a sobering fact: nearly one-third of the deck’s nonland cards cost five or more mana. Want another? You have a very sparse amount of mana ramp (a pair of Kodama’s Reaches). You’re going to have more than the usual difficulty in finding a decent opening hand, and you’re very vulnerable to drawing things you simply can’t cast.

The good news is, if you do manage to establish a foothold in the mortal world, your Spirits will very quickly begin to take over the game for you. Once you’ve managed a few in your graveyard, soulshift will provide you with a steady stream of card advantage. Although each soulshift Spirit will always grab a cheaper card from your graveyard (assuming one’s available), this still gives you a sort of ladder effect where each creature that dies keeps returning in a slightly weaker form. You can very quickly stymie your opponent’s offense this way, as trades in the red zone hurt them far worse than they hurt you. And with kami like the Thief of Hope, Gibbering Kami, and Kami of Lunacy which either have evasion or ways to extend your reach, a congested ground game isn’t such a bad thing.

A substantial number of preconstructed decks adhere to the feast/famine archetype, something we’ve addressed before. Under the right conditions, your deck ‘turns on’ and becomes quite powerful, where it might be vulnerable otherwise. The trick, then, is to maximise your chances for attaining the right conditions, and use your deck’s empowered arsenal to defeat your opponent. In Kami Reborn’s case, that factor is establishment. Weak in the early game and susceptible to early blowouts, if you can get the right cards out and bid for time you can craft a brutal juggernaut of an engine for the late-game. It’s not a strategy for everyone, but it does hew to a certain logic.

It does make one wonder about the strength of soulshift with regards to the set’s power level for its theme decks, in light of the fact that the deck is so congested on the back-end. With only a couple of ramping options, you might be forgiven for wondering if that is a deliberate design decision. Is soulshift so powerful that if the deck’s mana curve was more balanced it would run the table on the other three? Or was this something of an oversight on their part, not realising how crippling the deck’s expensive card allotment could be to its development ingame. We might never know for certain, but it’s an interesting question.

Overall, this is a deck for those who don’t mind taking some lumps to set up the potential for a crushing victory, and the deck shows glimmers of promise. It will be interesting to see in later reviews of Betrayers and Saviors of Kamigawa whether or not a more functional Spirit/soulshift deck emerges.

Hits: Heavy Spirit tribal element gives the soulshift mechanic tremendous support; soulshift can yield a great deal of card advantage over the course of a game; solid closing options not just in creatures, but in cards like Dance of Shadows and Devouring Greed

Misses: Exorbitant mana curve and lack of a solid ramping suite mean that you’ll be struggling with bad opening hands and bad draws for much of the game, leaving you vulnerable to an early defeat