Ravnica: Charge of the Boros Review (Part 2 of 2)

Our first game of Ravnica, and we’re entering into Topsy Turvy Land.  Ordinarily it’s Jimi who is seen piloting Boros constructions, but today for our opening salvo she’s instead navigating the Green/Black Golgari Deathcreep, with its signature dredge mechanic. Meanwhile, I’ve got point on Boros, and will look to see if I can take Jimi out of the game before she can get her recusrion engine online. As ever, we played three games, and here are our notes.

Jimi starts on the play, and drops a Swamp. I gain momentary advantage when I run out a one-drop, the War-Torch Goblin, but Jimi trumps that with her next-turn Golgari Guildmage. Not to be outdone, I play a Thundersong Trumpeter and pass back.

Now turn 3, Jimi adds a Necromantic Thirst to the Guildmage, which tells me she doesn’t have a lot in the hand at present. I tap down her Guildmage with my Trumpeter, summon a Skyknight Legionnaire and drawing first blood for 3 on the attack. Back to Jimi, she counterattacks for 2- though with no creatures in her graveyard yet the Thirst goes unfulfilled. She then plays a Thoughtpicker Witch and pops it to put a check on my library. Her gambit works as she hits paydirt, exiling my own Guildmage. Still, it’s a bump in the road as I play the Flame-Kin Zealot, swinging with the side for a bruising 11 damage.

Now turn 5, Jimi’s down to 6 life. She plays a Greater Mossdog to try and buy some time, but it’s for naught. I untap, cast Rally the Righteous, and unload for the win. 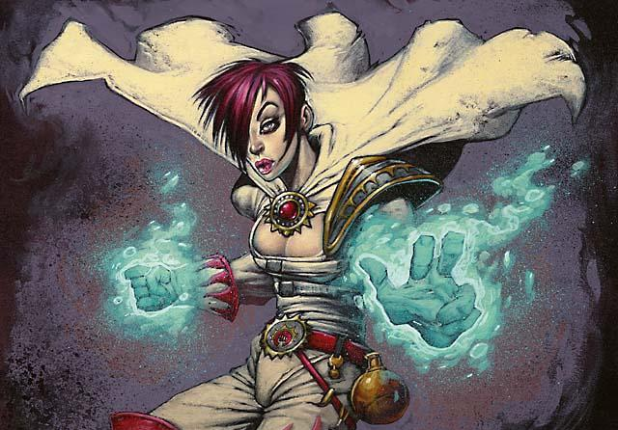 Back to the drawing board, Jimi again tries to begin with a turn-2 Golgari Guildmage. Meanwhile I lead with a Terrarion which I pop on turn 2 for the extra card (my manabase looks to be shaping up fine without it), then summon the Boros Guildmage. Jimi swings for 2 on turn 3, I fire back for 2 and bring out another Swiftblade.

Already behind, Jimi adds the Thoughtpicker Witch on turn 4, missing her first land drop on the turn. I hold off on an attack, not wanting to trade any of my creatures just yet, and summon a pair of Viashino Slashers. Next turn sees Jimi bolster her defenses with a Greater Mossdog after landing a Forest, but once it’s back to me I Lightning Helix it and swing with everything. With mana open to make one of my creatures have first strike thanks to the Guildmage, Jimi lets all 6 through- down to 12 life. I play a Nightguard Patrol and pass.

Sadly for her, Jimi’s turn 6 is another blank. I again send in the Legion after killing her Guildmage with a Last Gasp. Swapping the power and toughness of the Slashers means I’m hitting for 8 this turn, and Jimi’s on the verge of death. She draws, and concedes.

Three games, three opening Golgari Guildmages- maybe third time will prove the charm for Jimi. For my part, I lead with a turn-2 Thundersong Trumpeter which gets Putrefied on turn 3. That leaves me open for attack, and Jimi swings with her Guildmage. Back to me, I deploy a Skyknight Legionnaire and return fire, leaving us both at 18.

Jimi attacks again on turn 4 but has no other play. I lead with Sunhome, Fortress of the Legion to give me some later options, then attack back for 2 to keep us tied. I then summon a Boros Swiftblade and Boros Recruit before ending turn. Back to Jimi, her turn 5 is a blank. I keep the pressure on, swinging in again with the Legionnaire. If Jimi’s wondered at my restring on the attack she’s shown little sign, but it becomes clear when I trot out Agrus Kos, Wojek Veteran. Disgusted, Jimi responds by Darkblasting the wee Boros Recruit.

Now turn 6, Jimi dredges back her Darkblast, but hope is fading quickly. Her turn a blank, she passes. Back to me, I use Sunhome to give Agrus Kos double strike, and with him leading the charge I send a potential 20 damage across the table. She chump-blocks Agrus with her Guildmage and in desperation Darkblasts the Boros Swiftblade to drop its damage down some, but is still left taking 8. The Golgari Grave-Troll that comes next is too late to do any good, and she folds the next turn.

To be fair, it can take some time to get Golgari Deathcreep going, and unfortunately for Jimi she never found the tools to blunt the early advantage Boros has- this was a beating, plain and simple. Charge of the Boros has the tools to dominate the early-to-mid, and in that sense one of the deck’s great strengths is that it deprived Golgari of the time it needed to establish itself. Game One in particular was a dominating affair with that rather uncommon beast in the preconstructed format- a turn 5 kill.

By themselves, the weenie-size creatures of Charge don’t seem all that impressive. The Boros Swiftblade, for instance, often is little more than a two-mana 2/2, and the 1/1 first-striking Boros Recruit is often outclassed by its later comrades. The strength of the deck, then, is in the many ways it finds to pump up its beaters’ power, making them far more formidable on the battlefield. Between cards like the Flame-Kin Zealot and Rally the Righteous, there always seemed to be an air of tension just outside the red zone, knowing that Charge could explode at any given point in time.

It’s removal suite was reasonable enough, though Dogpile is too unreliable for comfort, given how conditional it is on the state of combat. If there’s a potential Achilles’ heel here, its in the underwhelming radiance ability. Playing against a Green/Black deck, I never had to worry about ‘collateral benefit,’ but it might have been a very different tale were I playing against the Selesnya, Rakdos, Gruul or the like (guilds which share a colour with Boros).

For the combat-minded, this deck is a great deal of fun to play. Both quick and lethal, it has the capacity to keep your opponent on the back-foot, preventing them from playing their game plan and forcing them to deal with yours.

Hits: Very fast and aggressive deck that keeps to a proven strategy; Lightning Helix is a superb component of its burn package; cards synergise fairly well with one another