Ravnica: Charge of the Boros Review (Part 1 of 2)

Ravnica has remained as one of the iconic sets in Magic: the Gathering’s eighteen year history, and not without good reason. Sure, it had some help from the environment it was released into, a two-year low point in the game’s popularity stemming from the broken Standard environment during Mirrodin followed by the underpowered and underwhelming Champions of Kamigawa. Magic creator Richard Garfield was back, helping design his first set since 2002’s Judgment. And the set’s guild system proved to be tremendously popular. By breaking down the set into ten two-colour guilds, Wizards in a stroke gave Ravnica a strong sense of branding and identity. Mark Rosewater has previously observed that by giving players a sense of association that they could relate to (as in, what’s your favourite guild?), they found that the flavour of the set resonated much more deeply for them.

Ravnica released with the launch of four of the guilds- Boros, Selesnya, Golgari, and Dimir- with the other six to follow in the two small-set expansions of Guildpact and Dissension. Although many of these names are lost to the mists of time, above all others ‘Boros’ to this day is used as jargon to describe a deck that is both Red and White, even as the signature Boros mechanic itself has fallen out of favour. Rosewater himself listed radiance as dead last in his ranking of best-designed mechanics from the block:

And for those of us unfamiliar with the mechanic, here it is:

Aside from Leave No Trace, all radiance cards target creatures and splash over to any other creatures that share at least one colour with them. To get the most from this ability, of course, it helps to have a lot of creatures around to take advantage of it. As Rosewater identified above, however, it can be quite the double-edged sword. A card like Rally the Righteous sounds great when you’re imagining your Boros horde charging headlong into the red zone or mounting a surprise defense, but when you’re up against a Red or White deck it becomes a little more complicated. In such situations, Cleansing Beam too can carry the risk of being a board-sweeper, and might often be a dead draw in your hand.

The Boros Legion is the law-and-order guild of Ravnica, and are responsible for keeping the peace. Given that and the trickiness of their signature mechanic, how well does the rest of the guild fare in Charge of the Boros? Let’s begin with the footsoldiers. 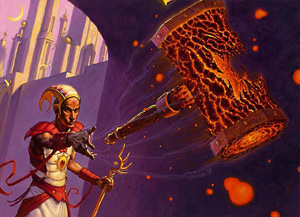 Focused With a Single Cause

Charge of the Boros is a swarm deck. Its creature curve is moderately linear (no great spikes or dips as you might expect to see), and most creatures are either 2/2 or less. It compensates for this by making every creature bring abilities to the table, helping them punch a bit above their weight. Here is the creature curve:

Goblins form the van of the deck, with a trio of Boros Recruits and pair of War-Torch Goblins. The Recruits are simple to cast, and can hold off (or bypass) your enemy’s early plays with their first strike. The War-Torch Goblins are a bit more conditional, with an activated ability that can help you trade them out for something larger on the attack. Of course, a canny opponent will either trade them out with another 1/1 or simply ignore them, but it still should let you get in some early damage most of the time.

Things pick up a bit at the two-drop slot, the deck’s busiest. A trio of Thundersong Trumpeters can help pare back your opponent’s defenses or blunt their offense, and their 2 power gives them a bit of strength. A pair of Boros Swiftblades may not seem terribly strong with 1-power, but their double strike can make them rather more formidable- especially if you can manage to pump their power. Twin Viashino Slashers are a bit less useful, able to flip their power and toughness around on the fly. Should you manage to up their toughness, however, you can safely activate their ability more than once, which gives them a touch more utility. Finally, the Boros Guildmage can grant your creatures haste and/or first strike at a reasonable cost.

On to the three-drops, we have the very solid Nightguard Patrol. Although a 2/1 for three mana isn’t the greatest deal in the world, their first strike combined with vigilance make them a very useful against any deck that relies upon small creatures to do its dirty work. A trio of Skyknight Legionnaires give you a the beginnings of an air force, and one with an element of surprise (thanks to haste).

The steady mana curve means the deck can provide you with some later-game muscle, though it still comes with the size restriction common to the deck’s creatures. The Flame-Kin Zealot, while being itself a 2/2, gives your beaters a boost when it enters the battlefield. The four-mana pricetag goes down a little easier when you realise that this is effectively a 3/3 haste creature, at least for the turn it comes into play. The deck gives you two, and they can help set up your forces for a massive swing. A singleton Screeching Griffin rounds out your air support, and with its quasi-evasion it can slip past defenders nearly at will. Finally, there are a pair of Ordruun Commandos, intriguingly-designed cards that make up for their brittle toughness with the ability to prevent any damage they sustain.

At the very top of the curve we have one of the deck’s two rares, Agrus Kos, Wojek Veteran. Each of Ravnica block’s theme decks contains a legendary creature, and Agrus is one of the main characters in the set’s novels. Fittingly, he acts as a sort of rallying figure here, giving your attacking creatures a bonus based on their colour (and your dual-colour cards get both). The other card here is a Greater Forgeling, which like the Viashino Slashers can play games with their power and toughness. With the ability to get 7 power- and ways to give it first strike– can make it a formidable creature indeed.

Hated by the Ghosts of the Guilty

To support its loyal legions, Boros has provided a number of supporting cards to help your army in its objective. First and foremost amongst these is your burn suite, which lets you clear defenders out of your attack path or finish off a crippled opponent. Dogpile lets you use your strength in numbers to greater advantage, while Cleansing Beam can potentially wipe out a large swath of your opponent’s creatures. The risk- as alluded to above- is that if your opponent has any Red or White creatures, you can potentially either risk collateral damage or simply have a dead draw taking up space in your hand. Finally, a pair of Lightning Helixes mate a Lightning Bolt with a dollop of lifegain. Most of your burn costs either three or four mana, so prepare to be on your own for a little while in the early game unless you come into a Helix.

Aside from the burn, you have the expected combat trickery in a pair of Rally the Righteous, which gives your army an offensive boost. As with Cleansing Beam, however, you must be careful when opposing mirrored colours lest you give your opponent the same advantage. The same goes for Bathe in Light, which offers you protection from a colour chosen at time of casting. This can be very useful for either a defensive blowout, or a final strike past your opponents defenses.

The noncreature support is rounded out by a trio of artifacts. The Cyclopean Snare is reusable tapping, although at a rather steep cost (five mana per use). Terrarion is a mana-fixer, with the added bonus of being both relatively inexpensive and a cantrip effect. Finally, the deck’s second rare is the Sunforger, a piece of equipment with a unique twist. In addition to providing a substantial power boost, the Sunforger can be unequipped to allow you to tutor for a needed Red or White instant that costs four or less. Only your Cleansing Beams exceed four mana, so this will help you locate the right spell at the right time.

And so we have met the Boros- a cheap and aggressive combat-centric strategy with a few surprises in store for the unwary. Join us next time when we follow the Boros legion into battle, and see how they perform!