New Phyrexia: Rot from Within Review (Part 2 of 2) 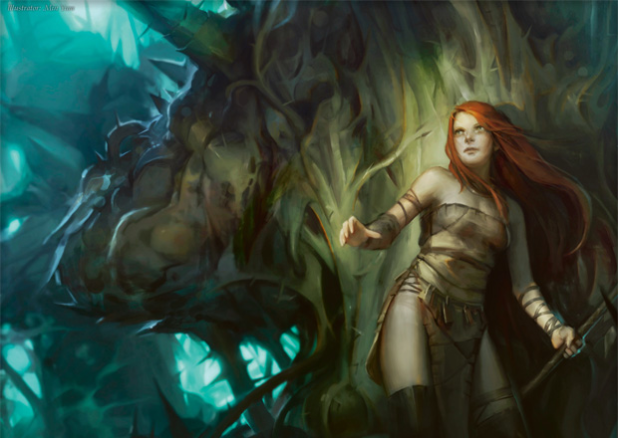 With the set behind us and the Event Decks about to be complete, we’re on the verge of leaving New Phyrexia for quite some time. Fitting, then, we’d go out with a bang and not a whimper, with two no-holds-barred aggressive options in War of Attrition and Rot from Within.

I sat down across from Jimi to give the deck a proper field test. Here are the notes from this final engagement.

After a first turn of establishing land, Jimi drops a turn-2 Stoneforge Mystic, tutoring up a Skinwing. She passes to me, and I deploy a topdecked Glistener Elf. Next turn she adds the Puresteel Paladin and a Flayer Husk to the board, giving her a virtually impregnable early defense. She sends in the Mystic for 1, then passes. Back to me, I play a potential saviour- the mighty Rot Wolf. It might not look like much, but I’ve got a few pump spells in hand. I’d rather use them on Jimi directly, but chewing up her guys while cantripping the pump is a solid second option.

Now turn 4, Jimi adds a second Flayer Husk to her forces, then uses the Mystic to cheat out the Skinwing. Once my main phase rolls around, I attack with the Rot Wolf. Rightfully afraid to leave an attacker unblocked, Jimi offers up the Puresteel Paladin to trade in what seems to be a case of short-term over long-term thinking. I pop a Groundswell to pump the Wolf, letting it kill the Paladin and survive. I draw a card off the Rot Wolf, then play an Overgrown Battlement.

Next turn, Jimi plays a Sword of Vengeance, probably wishing now she’d saved the Paladin. She attacks with the Skinwing for 2 (taking me to 17), then adds a Leonin Relic-Warder. Although Rot from Within carries artifacts, it doesn’t have that many and her concern is likely a surprise Putrefax. She passes to me and I attack with the Rot Wolf. Jimi pushes the Relic-Warder in front of it, I pop another Groundswell and once again she loses a body and I draw a card. It’s a timely Viridian Corrupter, so I play it immediately, shattering the Sword of Vengeance.

Now turn 6 and on the defensive, Jimi adds a Porcelain Legionnaire and passes. I send in both my Corrupter and the Wolf. A Flayer Husk chumps the Corrupter, while the Legionnaire goes up against the Wolf. A third Groundswell later, we repeat the cycle once more. Next turn, Jimi equips the dead Flayer Husk to her Skinwing, giving her a 3/3 body in the air. I attack in as before, with the Corrupter and Wolf tandem, and she chumps both with her Mystic and other Flayer Husk. I draw and play a Glistener Elf.

Jimi finally solves the Wolf on turn 8 when she sends it on a Journey to Nowhere, then adds another Flayer Husk. I attack with my Corrupter and pair of Elves anyway, and Jimi manages to block two of them. The one that gets through mainlines a monstrous steroid infusion, getting +16/+16 on the back of two Primal Bellows and claiming victory in one shot. 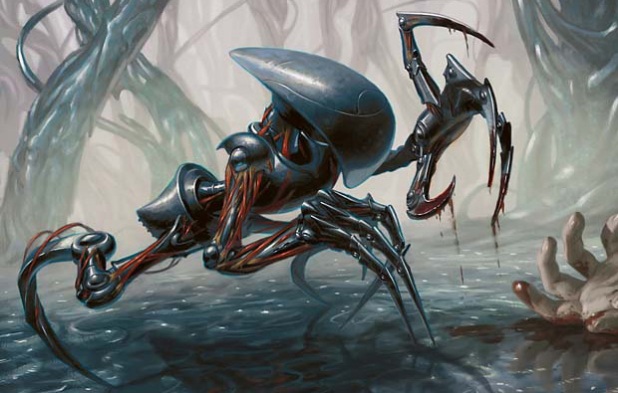 Jimi leads with a Flayer Husk, which is a play I really hate to see as it reduces the chances of me getting in quickly with a one-drop. I needn’t have worried, though, as I have no play of my own beyond the land drop. Next turn Jimi adds a Leonin Skyhunter after a 1-point attack. Back to me, I get on the board with an Ichorclaw Myr.

Now turn 3, Jimi ratchets up the pressure with a Kor Duelist and a Flayer Husk after a 2-point swing, taking me to 17. I counterattack with the Myr and Jimi chumps the Husk to it- anything not to be hit. Things take a turn for the worse next turn when Jimi adds a Porcelain Legionnaire, swinging in for 2 more damage. My counterattack is blunted by her other Flayer Husk, and I’m quickly falling behind.

Jimi gears up the Kor Duelist on turn 5 with one of the Husks, using the leftover mana to play a Leonin Relic-Warder banishing my Ichorclaw Myr. She attacks for 6 this time. I’m down to 9. My turn is a blank, and Jimi smashes in again with her White army after equipping the second Husk to her Skyhunter. Hit for 7, I draw nothing and scoop. A solid effort from War of Attrition, showing what it can do with only three land. 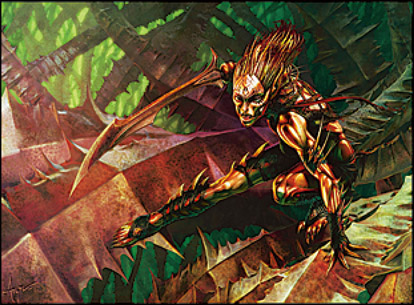 I’m delighted to see an Inkmoth Nexus appear in my opening grip and play it immediately, while Jimi starts off with a Kor Duelist. I follow up with an Ichorclaw Myr, while Jimi graduates to a Leonin Skyhunter. Next turn I attack with the Myr, compelling Jimi to offer up the Duelist to chump it. I then play a Contagion Clasp, placing the -1/-1 counter on the Skyhunter. Back to Jimi, she plays a Dread Statuary, then picks off my Clasp with a Leonin Relic-Warder before laying down a Flayer Husk. Atacking for 1 i nthe sky, she claims first blood and I’m at 19 life.

Now turn 4, I drop a Forest and activate my Nexus, sending an infectious mosquito buzzing in overhead to match the Myr shambling in on the ground. Jimi’s only flyer is tapped from attacking, so there’s nothing to oppose it as I layer on +4/+4 from a Groundswell. Just like that, I’m halfway home. The Myr picks off the chumping Flayer Husk. Over to Jimi, she plays and equips a Darksteel Axe to the Skyguard, but only opts to attack with the Relic-Warder for 2. I’m now at 17.

A turn-5 Rot Wolf follows an attack from my Myr which claims the life of Jimi’s Flayer Husk. The Wolf is solved almost immediately when Jimi drops it on a Journey to Nowhere, but next turn I attack with the Myr/Nexus tandem and get there on the back of a second Groundswell. 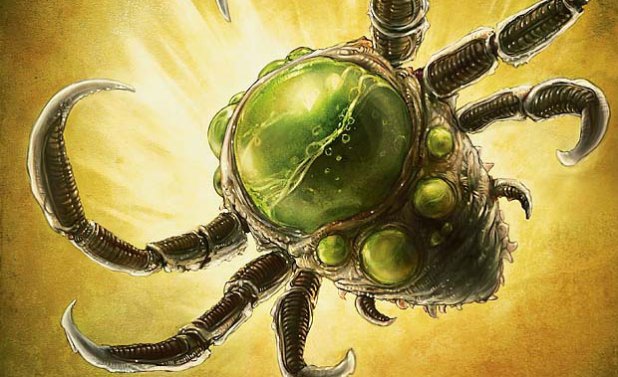 Of the two decks, I have to say that Rot from Within is by far the most fun to play. Again, it’s not that War of Attrition is a bad deck- it isn’t- but the all-in gamble of Rot is the stuff of which dreams are made. There are few answers to the turn-2 killpower this deck packs, and in any given game you can steal a win against nearly anything you’re likely to face.

There’s the sales pitch, now for the less rosy reality. Turn 2 kills? Sure, it’ll happen. Once in a great while. The reality is that this deck is the ultimate in feast-or-famine. It’s underequipped for the longer game, and doesn’t especially care to get there. Most of its tools are deliberately frontloaded, asking to to nuke your opponent the very first chance you get, because it’s not always certain you’ll get many more chances.

The Glistener Elf became notorious for this. On first blush it seems the perfect infect vector for the deck- get it out on turn 1 and run it in unblocked if your opponent doesn’t have an early blocker. It should be noted that this strategy is inconsistent, far more effective if you’re on the play and much weaker if you’re on the draw. Furthermore, it’s brittle and easily dealt with. As I played the deck, I very quickly came to see that my early-play-of-preference wasn’t the turn-1 Glistener Elf, but rather the turn-2 Ichorclaw Myr. Still a 1/1, yes, but as an effective 3/3 on the attack it was the reaper of chump-blockers and great value for the card.

The more expensive the creatures in this deck, the less useful they seem to the all-in strategy. In the first game, I managed to break through a boardstall with a Rot Wolf, who I had to keep using pump spells on to keep him alive. The free card I netted each time allowed me to churn though my deck, but this was something of a corner case. A three-mana 2/2 wasn’t nearly as exciting to me as the earlier options, and the back-end beatstick Putrefax was probably least sexy of all. Sure a 5/3 trampler can help get the job done, but I’d gladly have traded both away for two more Ichorclaw Myr.

Indeed, Putrefax is something of a misstep here, and although hesitant to go up the curve rather than down it I’d probably been a lot happier to see a Spinebiter or two in the list. The problem with Putrefax is that he costs five mana and dies the turn you play him. He also can be soaked up by a particularly robust defender,  taking a lot of the sting out of your pump spells. Since naturally the deck is in a race to play him quickly, it can be a little unwieldly to try and cast Putrefax with the mana open to cast all your pumps. Spinebiter- an uncommon, mind- would lose the shock value, but would more than offset that by the ability to let you swing with all your mana open and deliver 100% of his damage where it counts- to your opponent.

Another interesting consideration with the deck is the degree to which it forces your opponent to play your game. In both playtests, the War of Attrition pilot was compelled to trade away perfectly good cards in order to avoid being stung by a potentially lethal attack. Decks that warp or disrupt your opponent’s strategy to this extent are few and far between.

As far as fun factor goes, if you don’t mind eating a lot of grave earth along the way, you’ll have moments of glory with this deck that are unrivaled by any of the other three decks in the series.

Hits: An aggressively all-in strategy that, frankly, can be fun as hell to play; good pump selection, though it makes you want to find room for Unnatural Predations

Misses: Really needs two more Ichorclaw Myr to accomplish its mission; Putrefax seems somewhat out of place here, and would be better off vacating the rare slots for more Inkmoth Nexuses; all-in strategy typically gives you one squeeze of the trigger, sometimes two… after that, you’ll often be playing out the string