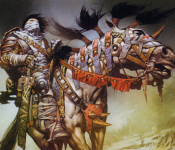 Decks aren’t always what they seem. To be certain, you can gain a very good understanding of a deck by breaking it apart and examining the 60 cards that comprise it, but that doesn’t necessarily give you the full understanding of how everything fits together. Candidly, Hope’s Crusaders was the deck I was least enthused about, seeming like a White Weenie deck with a hodgepodge of- surprise- White Weenies. Jimi and I sat down to play last night- she’d selected Reality Fracture to oppose the deck with- and played our ‘friendly.’

The friendly is the first game we play when we begin our reviews. We roll our spindowns to see who has first option for play or draw, then play a match whose results we don’t record. This gives us time to see the deck once, note some of its themes and interactions, and to get a sense of what we’re up against. The friendly has no real affect on our review, aside from both giving us further insight and observation to bring into our writeup, and to determine who chooses play/draw for the start of our first recorded match.

Although we had to break for the night after our friendly (fussy baby), we finished the matches today. Despite my early misgivings, the deck took me entirely by surprise in the friendly, an impression which would only be further reinforced in the matches. Here are the notes from the playtest.

On the play, Jimi ships a bad hand and draws six, opening up with an Island before passing. I deploy a Plains, tapping it to summon an Icatian Javelineers. Jimi’s next turn is spent playing a Mountain, while I attack with the Javelineer before adding a Benalish Cavalry to the board.

Another quiet turn for Jimi on turn 3 gives me the opportunity to really cement my board position. I attack for 3 with both creatures, then follow up with a Zhalfirin Commander. Next turn Jimi plays an Island, then ends her turn (it would turn out that she was mana flooded). Swinging in with the troops for 5 (taking Jimi to 11), I then summon an Errant Doomsayers and a second Javelineers to the board.

Jimi’s first play of the game comes on turn 5 with a Claws of Gix followed by a Viscerid Deepwalker. The Deepwalker keeps my Javelineers in check, but my flanking Knights have no fear of it and attack for 4 next turn after I first trot out a Cavalry Master. Jimi adds to her defenses on turn 6, tapping out and playing an Errant Ephemeron, but at the end of her turn I double-ping her with my Javelineers, taking her to 5 life. That sets up a full attack, dealing just enough damage no matter how she blocks to get there. 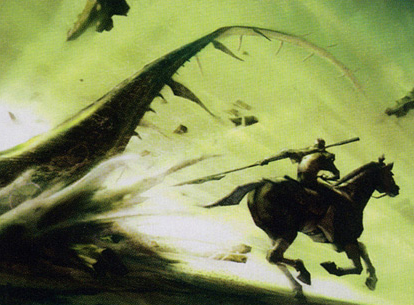 Another quick start me for me and slow start for Jimi. She drops nothing but Mountains for the first two turns, while I play an Icatian Javelineers and Errant Doomsayer. It comes to naught on turn 3, however, when Jimi follows up a Sage of Epityr with a Grapeshot. The Grapeshot’s storm replicates it once (thanks to the Sage), and she sweeps my board of both Weenies. Back to the drawing board, I replace my losses with an Outrider en-Kor and pass.

Now turn 4, Jimi plays an Island but has little else. I swing for 2 with the Outrider (taking Jimi to 17), then keep the pressure on with a Thunder Totem and Icatian Javelineers. Jimi’s turn 5 is a complete blank, so I have fairly free reign of the red zone. I hold the Javelineers back- there’s meatier prey to be had in her deck than the Sage- and swing with both the Outrider and the animated Thunder Totem. (That’s another of Time Spiral’s subtle touches, how the Spirit you animate from the Thunder Totem pays homage to the Thunder Spirit, a rare from Legends on the reprint list.) With Jimi now at 13 life, I summon the mighty Brass Gnat and pass.

Jimi plays another Mountain on turn 6, then suspends a Rift Bolt before passing. Back to me, I attack with the Outrider and Brass Gnat for 3, then add a second Outrider en-Kor ([LSV]an en-Kor performance?[/LSV]). Over to Jimi, her Rift Bolt unsuspends and she picks off one of my Outriders, and I have no feasible way to save it even with its damage-redirection ability. She then takes advantage of her storm count by following up with another Grapeshot, sniping off both my Javelineers and the Brass Gnat. The respond by activating the Javelineers to pick off her Sage of Epityr- the Icatians may die, but they won’t be dying alone. Still, it doesn’t stop the damage rolling in, as I take Jimi down to 6 with my surviving Outrider and the Spirit.

With the Javelineers gone, Jimi’s free to play the Keldon Halberdier she’s been holding onto, for all the good it does her. The flanking Outrider will kill it if she declares it as a blocker, before it would even do a point of damage. The Spirit- having flying- is out of its reach. Next turn she hits the Outrider with a Ground Rift, upping her storm count to get a double Empty the Warrens off, but she has no answer for the Spirit, which grinds her down in the air.

So far, for those keeping score at home that’s three games won for Hope’s Crusaders, all three ending at 20 life. Unwilling to permit such indignity to continue, Reality Fracture was about to offer a taste of its true power.

On the play, Jimi starts off well, suspending a Viscerid Deepwalker off of her opening Island. I play a Plains and pass- no Javelineers this time, alas. Next turn, Jimi drops a second Island, then sends a Riftwing Cloudskate into suspension. Fortunately, I have a Benalish Cavalry in hand with the mana to play him, and I begin to build up my forces.

Now turn 3, Jimi suspends a Deep-Sea Kraken, putting me on a rather unpleasant clock and forcing me to be much more judicious in what I choose to play. I send in the Cavalry for 2, then follow up with a Zhalfirin Commander before passing. Next turn, Jimi suspends a second Viscerid Deepwalker, while I do nothing except swing in for 4.

Jimi’s time bubbles pop on turn 5 as both the first Deepwalker and the Cloudskate emerge from suspend with haste, attacking for 4. after my Zhalfirin Commander is bounced back to hand by the Cloudskate. With a storm count of 2, Jimi then follows up with Empty the Warrens, netting her a half-dozen 1/1 Goblin tokens for her troubles (which are now my troubles). Back to me, I play a Gustcloak Cavalier, but hold off on the attack.

Jimi kills off the Cavalier with a hardcast Rift Bolt on turn 6, then attacks with the full might of her forces. I block a Goblin token with my lone defender, the Cavalier, leaving me at 8 life. Forced to add some defense, I replay my Zhalfirin Commander, then play a second one.

Now turn 7, Jimi’s Kraken has one time counter left on it. She casts Clockspinning to remove it, and alpha strikes for the win.

If this deck could be summed up in a line, one from the printed insert comes to mind: This deck gives your opponent no good blocking options. In that regard, it is a resounding success- Reality Fracture all but withered beneath a fast and steady stream of flanking attackers. This firmly plants it within the hall of White Weenie greats, but like all such decks, it is not without its (somewhat considerable) flaws.

One such flaw is mitigated by its primary mechanic of flanking. Ordinarily, Weenie decks need to crowd the red zone in the early game, before defenders start popping up that they can’t get past. Flanking more or less gives you a full turn’s advantage early on. Even if your opponent is keeping pace with you creature-wise, yours will have the edge on the attack and deny them a profitable trade. Benalish Cavalry will always beat Grizzly Bears.

Another flaw is that the archetype tends to expend itself early, though towards that end mana sinks like the Thunder Totem are useful, as well as the array of more expensive creatures that have a strong impact on the battlefield, like the Cavalry Master and Celestial Crusader. This should act as more than enough support through the midgame, and give your early Weenies some stiffer legs.

As far as removal goes, Hope’s Crusaders is dealt a terrible hand. To sensibilities accustomed to modern White removal, the pricetag rightly seems prohibitive- tapping three creatures? In a White Weenie deck, you might as well be casting Time Walk on your opponent. While the homage to Hand of Justice is very clever (including the flashback cost), these are not solid prospects. To be fair, Time Spiral itself didn’t carry much in the way of White removal, so what you get is what you get.

Overall, to those who enjoy the White Weenie archetype, Hope’s Crusaders will be a blast. While playing I likened it to feeling like I was standing on a hill with Jimi below it, rolling one boulder after another at her- that’s exactly how this deck felt. Of course, fair play to Jimi in the third game, who got to feel much the same but in reverse!

Misses: Removal suite is dreadful, and might have been better having none at all (a combat trick like Fortify might have been more optimal here in multiples); deck’s rare package very hit and miss- Sarpadian Empires, Vol. VII is terrible (Evangelize, Serra Avenger, Mangara of Corondor… there were much better options)