And so it’s come to this. The final battle of Coldsnap, our first (and only) visit to the land of the Ice Age block, a set the bulk of which was released prior to the advent of the theme deck/intro pack. My opponent for the evening is none other than Sam- who but her could we ask to pilot the Green/Red beatfest known as Aurochs Stampede?

For my part, I’ll be championing the Blue/Black Snowscape, a deck that looks to trade off of the snow-covered permanents subtheme of the set. With some decent early stall I could look to take over the midgame and dominate the board. Or I could be crushed under a mad rush of hooves- only one way to find out. Here are the notes for this final Coldsnap engagement.

On the play, Sam leads with a solid start- a Tinder Wall– and passes. I’m in with a strong opener of my own in a Rimebound Dead, a solid regenerating chumpie to keep the red zone under control for awhile. Sam lands her first Aurochs on the next turn- a Bull, then follows up with a turn-3 Boreal Druid. I occupy myself laying land and building up my resources.

A second tribal attacker touches down for Sam on turn 4- an Aurochs of the classic model. I answer with a Legions of Lim-Dûl, which isn’t much of an answer. My Rimebound Dead eat an Incinerate next turn, and Sam sends in the stampede for 6. I’m able to plug the gaping hole in my defenses left by the loss of the regenerator with a 5/5 Drift of the Dead, which should keep things simmered down for awhile. Sam comes in for 6 more next turn, but I trade out the Legions for her Bull Aurochs and cut her army in half. Still, I take 3 and am down to 11. For my part, I drop a Chilling Shade, a nasty threat on both sides of the red zone with as much mana as I have on the board.

Sam’s turn-7 Whalebone Glider gives her the means to chump the Shade, though at 20 life she doesn’t feel any immediate need to. The Shade chunks into her for 7 as she lets it through. Sam’s next turn is a blank, but now the Shade has her undivided attention. It swings in again and she uses the Glider to send up the sacrificial Boreal Druid offering.

Now turn 9, Sam draws a second consecutive blank, but Snowscape presses its advantage. Again the Shade comes in, Sam sends up her Tinder Wall (an amusing visual), which she then sacs to deal 2 damage to me after blocking the Shade. Since I don’t have to tap any mana for the Shade, I have all seven up that I need to trot out the Rimefeather Owl, which enters the battlefield as a 17/17 flyer thanks in no small part to all of Sam’s snow-covered lands. Sam- surprise- scoops two turns later.

Sam leads with a Highland Weald, and I kick things off with a Snow-Covered Swamp. The tribal drum starts beating on turn 2 when Sam trots out the Bull Aurochs, while all I have to play next turn is an Arcum’s Weathervane. After swinging in for an unoppsed 2 on turn 3, Sam adds a Woolly Mammoths to her board and passes. I doom the Bull Aurochs with an Essence Flare just to keep Sam from getting out ahead too quickly.

Now turn 4, Sam replaces it with an Aurochs after swinging in for 3 with the Mammoths. Down to 15, I look to stabilise with a Frost Raptor and pass. Next turn, Sam charges the red zone for 5 damage, then adds a Rimehorn Aurochs. All I have is a poorly-timed Iceberg, which I might as well tap out for. I’m down to 2 next turn after Sam’s thunderous assault, after which she adds an Aurochs Herd and goes fetching for another. Unsurprisingly, I scoop. 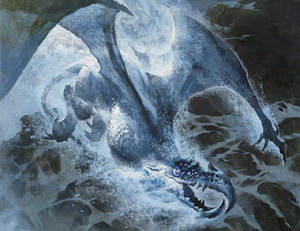 It’s my turn to be on the play, and I start with a Frost Marsh on turn 1. Sam cranks out an early Orcish Lumberjack and threatens to potentially ramp into something unpleasant. I do a little ramping of my own with a Coldsteel Heart on turn 2, an Iceberg (for two) on turn 3, and a Drift of the Dead on turn 4- a very promising start! Meanwhile Sam’s only managed a turn-2 Bull Aurochs, but until my Drift hits the table to dissade Sam from attacking she sends her troops in. My wall-induced respite arrives with me at 16 life.

Now turn 5, I advance my board state with Gangrenous Zombies and Rimebound Dead. Sam advances hers with Rimehorn Aurochs, and I know I need to do something. Packed with Aurochs, Stampede can attain very nasty alpha strikes rather quickly with the right draws. Figuring I can keep her off-balance for a bit, I pop the Gangrenous Zombies on turn 6 and kill off her Lumberjack and Bull Aurochs. Although forced to regenerate my Rimebound Dead, I lose nothing but the Zombies themselves, and Sam and I each take 2 damage. I then press my newfound advantage with a Frost Raptor and pass. Sam plays an Aurochs.

My next couple turns are spent attacking with my Raptor in the air while stockpiling mana on my Iceberg every chance I get. Unfortunately, my momentum advantage starts to bleed away as I draw into a land clump, getting nothing worthwhile. Sam, meanwhile, lands an Aurochs Herd, a Rimehorn Aurochs, and a Boreal Druid. I finally can come up for air on turn 10 whejn I topdeck a Chilling Shade. Still, with four Aurochs assembling at the edge of the red zone, I brace for impact. My Shade kills one, the Drift of the Dead claims another, but the last two come through for big damage. Any hope I have of squeaking by with a handful of life left is dashed when Sam flashes the Balduvian Rage. Good game.

I’ll confess I  left playing Snowscape with a bit of a bland feeling. Although it worked well enough for what it wanted to do- care about Snow-covered permanents- there just didn’t seem to be a lot of interesting things it could do with it. Sure it was nice getting a fat Drift of the Dead, and dropping a 17/17 flyer on the board made me immediately forget that it needed me to pay seven mana for the privilege, but on the whole there just didn’t seem to be enough source material there to make for a compelling deck. Perhaps it suffered a bit from complexity envy coming as it did right after Beyond the Grave, or perhaps it’s just not all that compelling a strategy itself, it’s impossible to know for certain.

Still, it was a nice foil for Aurochs Stampede, which seemed to get something of an (admittedly deserved) bad rap, but showed that deck to be a bit feast-or-famine. The first game Snowscape handily won, the next it just as handily lost, and the third it had right down to the wire until a strong play closed it out. Still, balanced by no means means exciting, and this just wasn’t it.

Hits: Good rare selection between one of the set’s legendary personalities and the Rimefeather Owl