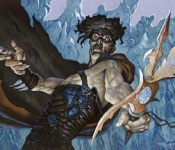 Our final trek through the frosty wastes of Coldsnap, fittingly enough, brings us to Snowscape. Don’t let the name fool you- this Blue/Black midrange deck is no Winter wonderland, but rather its filled with Zombies, Wizards, and other sinister powers which aren’t afraid to let a little cold stand in their way- indeed, they thrive on it.

With every one of your lands a snow land, the deck is packed with ways to take advantage of this unique permanent type and get more bang for every buck.

The first thing you notice about the deck is that it’s almost entirely filled with creatures- you only have nine spells at your disposal. Given that, and its midrange nature (plus the fact that we mentioned wizards), it should come as little surprise that there is a high proportion of utility creatures to be found within. For the most part, though, you’ll be looking towards evasive beaters to get the job done.

Under the Blanket of Cold

Broadly speaking, the deck has five classes of creature working together to attain victory. It boasts a fairly straightforward mana curve, with the expected concentration in the 3-and-4-drop area given the deck’s controllish tendencies.

Of course, with such a deck it can take a little time to get things set up, so that brings us to our first class of creature: defenders. All three of your one-drops are Rimebound Dead, a very solid early stall tactic. Because their regeneration can be paid with any colour mana, you’ll have little trouble activating regeneration when you need to, and you’ll never have to worry about tapping out its colour. A little beefier are the pair of Drifts of the Dead, which are guaranteed 4/4’s if you cast them the moment you’re able, and only promise to get bigger.

The goal, of course, is to congest the red zone, then let your evasive creatures do your dirty work. The first type of evasive bosy are your landwalkers. With two each of the Legions of Lim-Dûl and and the Zombie Musher, you’ll often be able to walk right through their defenses. No snow-covered lands? No problem! An Arcum’s Weathervane handles that problem nicely.

If that angle doesn’t manage to work out for you, don’t worry- the deck’s flyers don’t care what type of lands your opponent is playing. A pair of Frost Raptors are solid deals for their cost, and have the ability to protect themselves against your opponent’s targeted effects. The Chilling Shade can get bigger for every land you put into it- like the Rimebound Dead, it doesn’t draw its activated ability from a colour of mana, but rather by the snow subtype. The Blizzard Specter gives an uncommon twist on the specter archtype- it can force discard as normal, but you can instead opt to to return a permanent your opponent controls back to their hand.

From there we have a Storm Elemental from the Alliances set, which can shut down your foe’s aeriel defenses. It also has a pump-ability, though you’ll only get a hit approximately 40% of the time. Finally, we have one of the deck’s two rares, the Rimefeather Owl. Like the Drifts of the Dead, its power and toughness are equal to the number of snow permanents in play, which means at the outset it’s a 7/7 flyer for seven mana. But note the wording- unlike the Drifts, it looks for snow permanents (the deck gives you a further eight non-land ones), and they can be under anyone’s control, not just your own. If that wasn’t enough, it also has the ability to turn permanents into snow permanents. Once you land the Owl, the game should be all but over.

To disrupt your opponent while you marshal your evasive army, Snowscape gives you a wide assortment of utility creatures. The largest proportion of these are the Rimewind Wizards, mages which obtain a strong activated ability if you control four or more snow permanents. The Rimewind Taskmage can Twiddle a permanent, and the deck issues you a trio of them. The pair of Rimewind Cryomancers can counter activated abilities, and finally the deck’s legend, Heidar, Rimewind Master, can return a permanent to its owner’s hand. The inclusion of a legendary personality in all but the Aurochs Stampede deck has been one of the set’s nicer touches.

Beyond the mages, we have a Gangrenous Zombies, which can be sacrificed for a board-clearing Pestilence-like effect. The Balduvian Frostwaker essentially places a Wind Zendikon on any of your snow lands. Lastly, the Viscerid Drone can act as rather costly but reusable removal. As you’ll see, given that the deck is so woefully underequipped with removal, this is a most welcome addition.

Finally, we have some rather straightforward beaters, creatures which don’t fit in any of the other categories. These include a pair of Mistfolk (which, like the Frost Raptor, can protect itself for a minor investment of mana) and a Phantasmal Fiend.

As mentioned above, the noncreature complement here is rather paltry, but let’s at least see what’s in the cupboard. 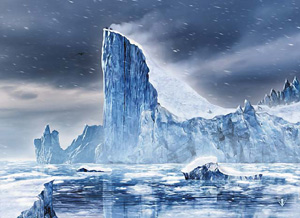 Freeze You From the Inside Out

As mentioned above, the pickings here are a bit slim. There’s a dash of mana ramp/fixing in the Coldsteel Heart and Iceberg, while you can play shenanigans with the land types (snow or non-snow) with the aforementioned Arcum’s Weathervane. For those that remember the old Browse/Digger decks (which let you build a ‘custom library’ of the same small number of spells, like Incinerate and Swords to Plowshares, and play them over and over again), it’s fun to see Browse turn back up again. Here it’s just a bit of extra card draw for four mana.

The removal suite is pitiful: a single Chill to the Bone. Because of their slow, degenerative effect, you might find yourself having to use the two Essence Flares as ersatz removal in a pinch, though they can also be used to layer on some power to your finisher. Finally, a rather more straightforward creature aura is provided in Snow Devil, which is something of a miss. The deck already has a solid number of flyers, including some of its best creatures. Snow Devil grants flying as well as first strike, but you only get the first strike on defense. Terrible, and a shame the designers went for two of them rather than a couple more Chill to the Bones or Dark Banishings.

With such little removal, you’ll be at the mercy of your opponent’s creatures, so hopefully the deck has sufficiently compensated for this with its creature selection. We’ll take it into the field to find out, and report back in two days!