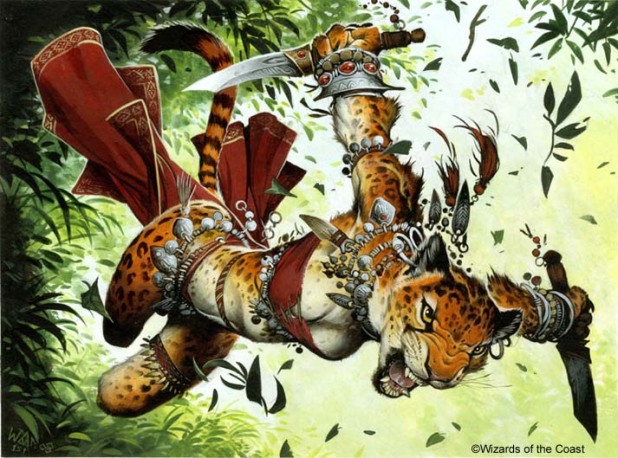 It’s our final visit to the plane of Alara for the while (until we return in the future with Conflux), and it’s been a richly rewarding one. Although this is a set Sam much prefers over me, we’ve both found reasons to enjoy and appreciate the set. Sam’s delighted in the setting and memorable characters like Ajani and Elspeth, while I’ve found a word here to describe my personal colour-preference: Grixis.

And so it’s with some irony that for our final match we’ll have completely switched places, for I’ll be piloting Naya Behemoths while Sam sets up behind Grixis Undead. Being candid, I’ve probably looked forward to playing this deck the least as a matter of personal enjoyment- heavy creature decks don’t typically thrill me the way others do, but we’re both ready to see how they measure up. Can the heavy killpower of Grixis keep my behemoths at bay, or will Sam find herself reduced to a foul-smelling substance beneath the foot of one of my mighty gargantua- here are our notes.

I’m on the play, and I start- fittingly enough- with a Forest. For her part, Sam does the same with a Swamp. Next turn I hit a bit of acceleration with a Rampant Growth. Aside from a land, Sam’s turn is a blank.

Now turn 3, I explode with a Wild Nacatl (now a 2/2) and Naya Battlemage before passing, while Sam answers with a Kederekt Creeper, an annoying piece of board stall. Next turn, I tap down the Creeper with my Battlemage after laying a Naya Panorama and fetching a Mountain with it. The now-3/3 Nacatl swings in for first blood. Sam responds with a Blood Cultist and passes.

I keep the pressure on using the Battlemage to tap down her Creeper, and swing for another 3 on turn 5. Not to be outdone, Sam sends her Creeper in for 2, then drops a second Creeper to mind the home front. We’re keeping up a quick pace, and it’s still anyone’s game. One the end of my turn she’d cracked a Grixis Panorama for a Mountain, and her mana development has been steady. Mine’s kept pace as well, with a fairly even distribution of land types.

Next turn (turn 6) sees me add to my offensive forces with a Cavern Thoctar, but still no inclination to go over the top of the trench only to run right into her deathtouching Creepers. For her part, Sam plays an Incurable Ogre and passes. My turn 7 is a complete blank, but Sam decides that its time to go on the offensive. She swings in with an Incurable Ogre. Opting for a kill I block with my Thoctar and snap off a Giant Growth to keep it alive. I’m thwarted when Sam shows the Agony Warp, and both beaters head to the dustbin. Sam cannily pings my Thoctar with her Cultist on the way out for a free +1/+1 counter, and the turn is over.

Now turn 8, I replace my fallen Thoctar with a Rakeclaw Gargantuan. Sam drops a Gravedigger to fetch back her Incurable Ogre after sending in a Creeper for 2. It’s now 14-16, slight edge to me. Next turn I send in the Rakeclaw, and Sam chumps it with the Gravedigger. She misses an opportunity to develop her Cultist, though, forgetting to ping her own body before it dies. For her part, she adds a Vithian Stinger and recasts the Incurable Ogre.

I swing in again with the Rakeclaw on turn 10, and this time it connects, dropping Sam to 9 life. After tapping down her first one with my Battlemage (as I continue to do throughout), Sam plays a second Incurable Ogre to keep her forces built-up, but tragically forgets to double-ping my Naya Battlemage with her Stinger/Cultist tandem. Next turn, I swing again with the gargantuan, giving it first strike when Sam chumps it with an Ogre. Back to Sam, she sends in both Creepers to take me down to 12 life, pings the Rakeclaw with her Cultist and tries to kill it off with an Agony Warp. The Cultist is denied a second +1/+1 counter when I respond with a Giant Growth.

Now turn 12, I again send in my MVP Rakeclaw, and Sam offers up the Vithian Stinger to chump, using it to ping me on the way out. I follow up with a Mosstodon and pass. Sam responds on her turn with a Blightning, dumping my hand (Spearbreaker Behemoth and a land) and leaving me at 8 life. Next turn I attack with both my beatsticks, and Sam blocks each with a Kederekt Creeper. I trigger first strike and trample for each, and Sam’s at 5 life. While she attempts to stabilise the next round with a Fire-Field Ogre, I draw into a Titanic Ultimatum and swing for victory. 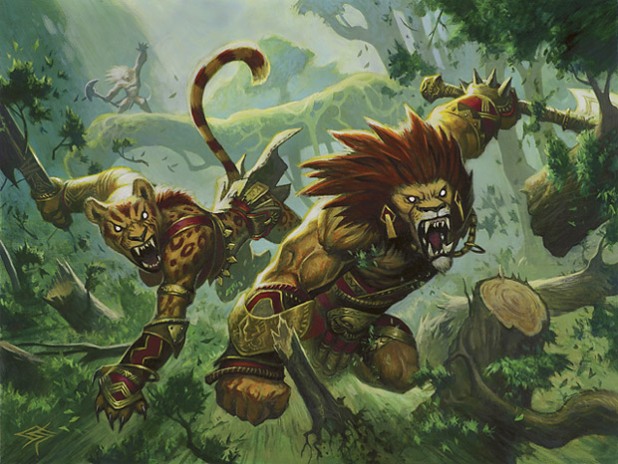 The first play of the game is my turn-2 Cylian Elf, and we’ve both been starting our mana development rather evenly with Sam benefitting from a Grixis Panorama. I’m preparing to live the dream with one of each basic lands and a Woolly Thoctar in hand. My turn-2 Cylian Elf isn’t long for the world as Sam snipes it with a turn-3 Fleshbag Marauder, a play which has me momentarily puzzled. I replace the Elf with a Woolly Thoctar and pass back.

Sam’s diabolic plan comes to fruition on turn 4 when she drops a Gravedigger, pulling the Fleshbag back to hand. With no creature to cast to protect the Thoctar, I know his days are numbered. I send him in for 5, then pass. Next turn, as expected, Sam drops the Fleshbag a second time, killing off her Gravedigger and my Thoctar after sending the Gravedigger into the red zone to hit me for 2. I replace my Thoctar with a Rakeclaw Gargantuan and pass.

Now turn 6, Sam Terrors the Rakeclaw and swings for 3 with the Fleshbag before adding to her forces with a Kederekt Creeper. I replace the Rakeclaw with a Bull Cerodon, and Sam sacs the Fleshbag to a Bone Splinters to kill it. I can’t seem to get anything to stick! Finally I land a Mosstodon on turn 7, and Sam’s run out of bullets- the worst she can muster is a turn-8 Hidden Horror (discarding a Dreg Reaver). I pair the Mosstodon with a Cavern Thoctar next turn and pass, while Sam follows up with an Incurable Ogre.

The stall breaks when I drop Titanic Ultimatum and swing for lethal. 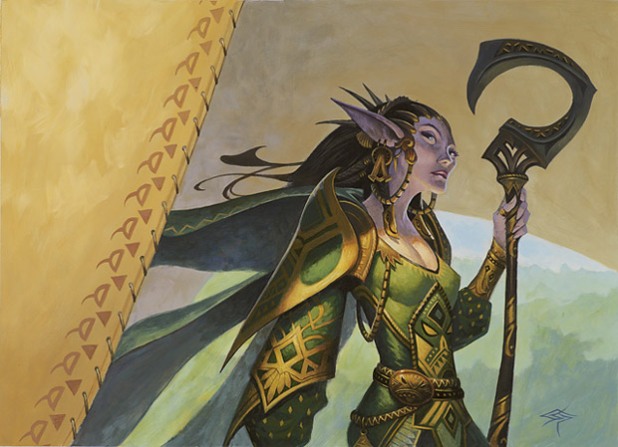 The final game of the match and Sam leads off with a Panorama while I open with a Jungle Shrine. Sam follows with a Swamp while I add a Plains and a Druid of the Anima to get a quick start. Not quick enough, alas, as Sam sticks a turn-3 Blood Cultist and my Druid’s days are numbered. Still, she helps me power out a Naya Battlemage and (2/2) Wild Nacatl, and I pass the turn.

Now turn 4, Sam kills off the Druid with her Cultist and its rewarded with a +1/+1 counter. She then follows up with a Felshbag Marauder, and I offer up the Nacatl- the Battlemage has proven itself too useful to dismiss so easily. She offers up the Fleshbag to itself. Back to me, I play a Gift of the Gargantuan, landing me a Mosstodon and a Forest. Next turn, Sam- stuck on three land- pings my Battlemage then kills it off with an Agony Warp, earning the Cultist another +1/+1 counter. I replace it with a Rakeclaw Gargantuan and beginning a series of very painful turns that show that even when Grixis is hobbled by land development, it can be quite a nasty opponent.

Sam’s turn 6 play is to ping my Rakeclaw, then kill it with Terror. I replace it with the Mosstodon.

Turn 7 sees Sam ping the Mosstodon, then kill it with an Agony Warp. Her Cultist is now bloated with four +1/+1 counters, and is a formidable offensive threat all its own- not bad for being stuck on three land. As luck has it, I draw into the one creature most safe from Sam’s shenanigans- the Spearbreaker Behemoth. Crossing my fingers, I tap out and drop him into play. Sam’s far from done and we both know it- as my own creature on the table, an answer is only as far away as the next Fleshbag Marauder or Cruel Ultimatum, the latter of which is highly unlikely given her stunted manabase.

Sam plays a turn-8 Fire-Field Ogre after finally topdecking a Mountain and passes. I swing for 5 with the Behemoth, and play a Cylian Elf as ‘insurance’ against an edict effect (an untargeted sacrifice, a la Diabolic Edict) after adding a Naya Panorama to my board. Next turn Sam tries to pillage my hand with a Blightning- I have only one card in it, and she naturally hopes its the Ultimatum. I smile as I pitch the almost-useless Naturalize. For my part, I swing in for 5 with the Gargantuan, dropping Sam to 10.

Realising that with what she has on the board she can outrace me, Sam swings with both bodies next turn- the 5/5 Cultist and 4/2 Ogre. After so many frustrating turns trying to get a creature to stick, payback is quite sweet indeed- I block the damnable Cultist with my Cylian Elf, pop off a Giant Growth to make it a 5/5 and then top it off by using the Spearbreaker to make my Elf indestructible. The look on Sam’s face is priceless, but that’s Naya for you- things grow here. Still, the Ogre gets in for 4, leaving me at 13 life.

For my part, I return fire with my troops for 7 (taking Sam to 3), then Rampant Growth for a Mountain. Next turn Sam kills the Elf with an Essence Drain, bringing her back up to 6. I swing back in with the Spearbreaker, and Sam chumps it with the Ogre.

Now turn 12, Sam plays the Vein Drinker, but I again topdeck a Titanic Ultimatum and with the mana to cast it. Not wasting any time, I play it for my Spearbreaker who then swings for lethal. A pity for Sam, who’d clawed her way back from a terrible start to be exactly one turn away from casting her Cruel Ultimatum.

Generally speaking, I’m not one who enjoys playing creature-heavy decks as much as some, but Naya Behemoths was a blast to play. Solid creatures and good mana development meant that in each game I always felt like I could at least field a few capable threats, even up against the removal-heavy Grixis Undead. Although the lack of spot removal remains troubling, it was a fun experience being able to drop body after body that the other player was compelled to find answers to. It wasn’t a perfect strategy (her Kederekt Creepers in particular had a very chilling effect on my aggression), but the deck seems optimised for it.

Further, I’ve concluded that I was a bit harsh in my estimation of the Titanic Ultimatum. Although I’m not feeling quite so charitable towards the inclusion of a Cruel Ultimatum in the Grixis deck due to its utter lack of mana acceleration, the card does seem to have a home here. Although of course you’ll never want to see it early, it played very well for me when it showed up in the later parts of the match.

The synergy between the behemoths played out very well. Having a number of large creatures that could share abilities at a very cheap cost really upped the power level of the deck, and made adding new gargantua more than just “adding another body.” Overall, from a play-experience perspective, this was one of the more fun decks from the set.

Hits: Strong synergy between cards; heavy creature component means you seldom lack for a credible threat; mana-development spells like Rampant Growth and Gift of the Gargantuan very solid in advancing your board development

Misses: Lack of targeted, instant-speed removal troubling; heavy back-end curve means that this deck will play into mulligans more often than most