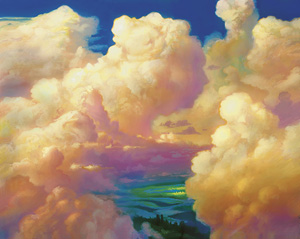 Most of you are familiar with the concept of a ‘cycle’ in Magic: the Gathering, but for those newer to the game who may not have come across this concept yet,  it is as follows. A cycle describes a group of cards that are linked together either thematically or mechanically. A good example from the latest block might be the Smith cycle (Myrsmith, Painsmith, Riddlesmith, Embersmith, and Lifesmith), with each card doing something very similar yet representative of the colour each card draws from.

In that vein, the five intro decks from the Shards of Alara set could be said to be a “cycle” as well. This is not just thematic, which is the obvious part- each of the five decks represents a shard of the plane of Alara, a part of the plane that has splintered off from the others and carries a very different topography and culture. It’s the actual compostion of each deck’s mana base that also gives it a mechanical connection. Within each deck is seventeen land, and each of the five has it divided identically. The primary colour gets seven of its respective basic land. Bant, identified with the colour White, has seven Plains. Then each of the two allied colours gets three basics each. As the allied colours of White are Blue and Green, there are three Islands and three Forests in the deck.

Finally, there are a quad of nonbasic lands. There are two of the plane’s representative uncommon tri-lands. These lands are themselves a cycle, for each of them enters play tapped but provides any of the three mana present on each shard. For Bant, this is the Seaside Citadel. Finally, there’s another two cards from a common land cycle, the Panoramas. These add colourless mana to your mana pool, but can be sacrificed to fetch basic lands represented by the shard’s colour composition.

From there, of course, things diverge quite a bit as the remaining two dozen cards are used to illustrate the feel of the shard, both its inhabitants and its culture. Today we’ll be focusing on the shard of Bant, a rigid but orderly place whose most noteworthy resident was Elspeth Tirel. The signature mechanic for Bant is exalted, which reads a little clunky but is quite easy to grasp once played. In short, because the peaceful and structured society of Bant solves its conflicts through single combat, that same custom is at practice in the mechanic. If you attack with one creature and one creature only, it gets +1/+1 for each occurrence of exalted on any permanent in play. Although primarily a creature mechanic, what its attached to might surprise you. 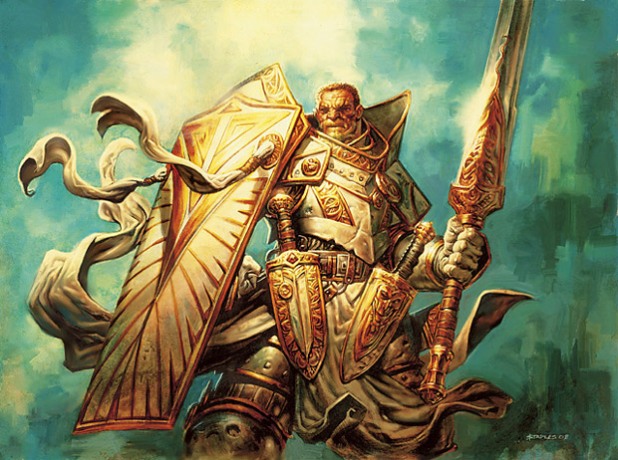 First we’ll begin with the creatures, for Bant Exalted is a creature-heavy deck (indeed, it shares the honour for most creatures in the set with Primordial Jund). Unlike the previous two decks we’ve reviewed, however, Bant Exalted isn’t content to cede the early game.

Making no mistake about its martial aims, Bant Exalted offers you a taste of its mechanic right from the start. The twin Akrasan Squires are simple 1/1’s, but they carry the exalted keyword. That means if you drop one right off the bat, you’ll be swinging with a 2/2 on turn 2- not a bad start. The other two cards are Suntail Hawks, at first glance simple 1/1 flyers. These small evasive bodies are ideal, however, for causing heavy damage to your opponent once you manage to get a sizable field of exalted creatures out.

The deck looks to keep early pressure on with a solid selection of 2-drops. Knights of the Skyward Eye are effectively Silvercoat Lions in the early game, but have the opportunity to grow as you do with a pump ability. The gold-bordered Steward of Valeron gives you the best of both in a 2/2 body, being vigilant as well as a mana producer. Finally the singleton Sigiled Paladin is a 2/2 first striker, and another creature with the exalted keyword.

With laudable consistency, the decks six three-drops are simple three pairs of creatures. The Rhox War Monk is a 3/4 lifelinker, but his colour-heavy casting cost means you’ll seldom be landing him on turn 3. The Guardians of Akrasa are 0/4 defenders who congest the red zone while lending aid to a lone attacker through exalted. Finally, the pair of Wild Griffins continue to offer a scaling evasive body to rack up those exalted bonuses with.

Although Bant Exalted lacks 4-drops, there are a trio of creatures clustered together at the top end of the curve. The Waveskimmer Aven is an exalted flyer with sizable toughness, while the premium rare Battlegrace Angel gives you plenty of incentive to attack using the Bant model. Not only is she herself exalted, but whenever you send a creature in alone, she bestows lifelink upon it. The last creature is the Knight-Captain of Eos, a 2/2 that brings along a pair of 1/1 Solider tokens alongside it. With five Soldiers in the deck not counting these tokens, you’ll seldom be at a loss to Fog your opponent while the Knight-Captain is in play. 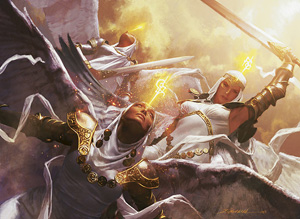 Clearing the way for your single combatant is a small number of removal spells and a tiny dose of support. There are four cards in the deck that help you solve threats, and only two of them (Pacifism) are permanent. The two Excommunicates can eliminate a troublesome defender, but know that you’ll likely be seeing it again when your opponent recasts it. You have some extra assistance in tying down defenses with an Angelic Benediction. Not only does this allow you to tap down a defender (provided you attack alone), it also gives you added incentive by being exalted too! Lastly, there’s buy-time card in Kiss of the Amesha. It’s a good chunk of life to be certain, but perhaps the better benefit is drawing two cards. Of course, given its six-mana pricetag, there’s often little you’ll be able to do once it resolves.

The Shards of Alara decks thus far have done an impressive job of conveying the flavour of their worlds, and Bant Exalted is no exception. With eight cards bearing the exalted keyword, you’ll have little problem solving conflict in Bant’s honourable single-combat style, and quite possibly prevailing. Join us in two days’ time when we take to the field of battle, and report on our findings. Onward to glory!