Mirrodin Besieged: Into the Breach Review (Part 1 of 2)

The waiting and anticipation is finally over. It isn’t often that Wizards releases a new line of products for Magic, but the much-anticipated Event Decks can now take their place alongside the Duel Decks, Premium Deck Series, Intro Packs, and other such preconstructed products. And the verdict? Well, taking a stab we’d say they’re not as good as what some folks hoped, but far better than what many feared.

When news of the Event Decks was loosed into the community some months ago, speculation was rampant as to what they might contain. The decks were positioned as “FNM-ready,” perhaps not a deck you could win a PTQ with but certainly one that would give you a shot at your local comic or hobby store. That deliberately-vague depiction left tremendous ground for guesswork. Would they have a slew of rares? Mythics? Planeswalkers? Jaces?

For those entertaining the end-spectrum of such fervent hope, prepare to be disappointed. The Event Decks- and there are two for Mirrodin Besieged (and two for the next set, ‘Action’)- contain exactly zero mythics. Nope, not a planeswalker between them. What you do get, though, is a finely-tuned deck that includes seven rares and a host of uncommons, so you certainly get some card value right off the top. In addition, each is packed in an attractive cardboard box, including a divider (for your deck versus your sideboard) and a Mirrodin Besieged “spindown” life counter. Nice attention to detail: the deck box holds the deck perfectly when they’re sleeved.

The real question, however, isn’t so much content as positioning. Do they live up to the hype? The card list is static- you know what you’re going to get when you crack one open- but the Friday Night Magic scene is anything but. Some are very casual, some very competitive, and the majority likely a proper mix. I’ve gone from battling against someone’s Orzhov-themed lifedrainer deck in one matchup right to the guy with playsets of Jaces and Baneslayers (back when she was a hotter commodity). You’ll find folks playing “netdecks of the stars” to those with a modified intro pack. It’s a meta that, from where Wizards is sitting, is virtually impossible to plan for. So how then do you construct these decks?

First, you obviously have to go for archetypes that aren’t propped up entirely by mythics. This reduces the field dramatically, but there are some builds that aren’t quite as invested in them as others. One of those archetypes is Red Deck Wins (RDW) or mono-Red aggro, and this brings us to Into the Breach.

Form if not Power

Into the Breach overcomes a lot of the field’s power and complexity with the simple adage that has guided Red mages since the earliest days of the game: speed kills. Get enough of a board position together fast enough, with a bit of burn in hand and not even a turn-3 Jace, the Mind Sculptor ramped off of an Everflowing Chalice is going to stop you from victory. Imagine if you took almost every card in your opponent’s deck with a converted mana cost of four or more and magically replaced it with a basic land, or better yet, one of the “tip cards” that come in booster packs, that’s in essence how aggro looks to gain card advantage. Forget drawing more cards, just make it so that your enemy effectively has less cards.

That need for speed becomes quite plain once we examine the creature curve:

And what a rogues’ gallery it is! The single card you’ll be most happy to find in your opening draw is a Goblin Guide, and the deck carries a pair of them. Although the drawback at first seems a steep price to pay (and let’s be frank, it can be), the fact of the matter is that against most decks your opponent will be drawing a free card less than half the time. With games expected to be quick, and with up to a few cards in their hand potentially blanks, the drawback isn’t quite as bad as it appears. Getting two out of the chute before your opponent has even drawn their first card can be most encouraging, and these are a natural fit.

Next up is a pair of Goblin Bushwhackers. These goblins are frequently found in more gimmicky RDW-style decks, and the presence of a pair of Devastating Summons should come as little surprise given their inclusion. The pairing was the crux of a “Devastating Red” deck that made the rounds shortly after Rise of the Eldrazi was released. And what to do with that haste? You could do far worse than Signal Pest, one of the signature creatures of Into the Breach. There are a total of eight cards with battle cry in the deck, and here are half of them. Fragile but tricky to kill, the Signal Pest is aptly named and will often be an unanswerable nuisance right off the bat.

If the deck is starting to take shape as an aggro-Red hasty battle cry deck, you’re exactly right. Next up we need some cheap fodder, and playsets of Ornithopters and Memnites are just what the doctor ordered. Finally, we have a lone Spikeshot Elder, a competitively-costed goblin with a repeatable ping. With the power boosts from battle cry and equipment, the three mana activation cost can quickly move from a gouge to a steal.

Finally we have a lone Iron Myr for the occasional off-chance of ramp, and a set of Goblin Wardrivers. Two-Red 2/2 goblins tend to be fairly decent (remember Ember Hauler?), and for the purposes of this deck this is a very solid fellow.

The deck is surprisingly spell-heavy, and has a large number of options for noncreature support. The robust burn suite of four Lightning Bolts and two Galvanic Blasts should be a surprise to no-one, and given the high amount of artifacts in the deck (seventeen of them) hitting metalcraft is far from the impossible dream. There are a pair of Darksteel Axes for some equipment, and a pair of Panic Spellbombs to falter a choice defender or two as you look to push through the last bit of damage.

Finally, there are a couple of unconventional ways to increase your creature count here. The aforementioned Devastating Summons can give you a good return on the investment of land, as this deck needs comparatively little to function. A playset of Kuldotha Rebirths also can yield high dividend at the cost of a card, and isn’t a bad option to consider on turn 1 if your hand offers it up.

Coming in at 22 land, the deck runs the leaner mixture that mono-Red can easily get away with. All but one of these are a Mountain, the last being a Contested War Zone– one more way to spur in a little extra damage. Overall, here is the deck’s impressively narrow mana curve:

So far as the maindeck is concerned, then, you’ve got a deck with a few near-parallel lines of play that is capable of explosive growth. Your turn-1 play will often set the stage for which direction you’re headed, be it through fast damage from a Goblin Guide, a combo play to squeeze out an early Kuldotha Rebirth, or even a turn-2 or 3 Devastating Summons to go all-in and dispatch your opponent quickly. By conventional standards it’s a budget deck, but that doesn’t mean it isn’t reasonably well-thought-out. 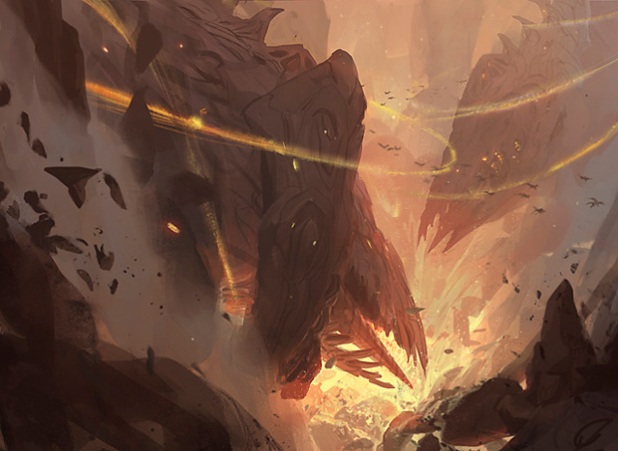 Leading Them to Their Doom

Unlike past theme decks, Into the Breach as a competitive/constructive deck comes equipped with a fifteen-card sideboard. Because sideboards are so directly tied to your own local meta they’re sure to change, but this is a solid enough place to start. Need a little extra burn? Four Searing Blazes await. Someone running just enough lifegain to keep victory out of your grasp? Try bringing the Leyline of Punishment in off the bench. That Kor Firewalker got you down? Don’t worry, there are a pair of Unstable Footings here. Some artifact hate with Into the Cores, landkill with a playset of Goblin Ruinblasters, and twin Acts of Treason finish out the board.

In addition to sideboard assistance (which is one of the most uncertain areas for the newer player), the deck also offers a few pointers on customisation. It’s here that the role of the deck really became evident. Back when the deck lists were announced, I saw that there were only to be two Goblin Guides, and decided then that that was a sure sign that the decks weren’t going to be highly competitive, but rather something of an “on-the’cusp” product. But surprisingly, Into the Breach acknowledges this to a degree by positioning itself as a ‘get-started’ product. Much like how intro decks come ready with a list of suggested cards you might add to improve the deck, the insert for the Event Decks does much the same. There are several different directions you could take, it says, if you want to change things up a little bit. It then goes on to suggest an “even faster” version which would “max out on Goblin Guides” and a few other quick cards to give it even more nitro in the tank. It also options “trading short-game power for long-game resilience and stability” by adding Hero of Oxid Ridge and Koth of the Hammer (mythics, surprise!) to the mix.

My best advice for someone considering picking up one or both Event Decks is to get the “FNM-ready” tag right out of your head. Instead, look at these as Intro Decks 2.0. Whereas the regular intro decks are great for teaching the game to a new or returning player, Event Decks are very solid options for the player who wants to try their hand at the first tier of competitive Magic. If nothing else, this represents a bold and ambitious new direction for Wizards, in that this is the first time that a product has been released that is tuned against the game’s own player base.

In our next feature, we’ll turn our attention to Infect & Defile, the Phyrexian Event Deck, and see how it is put together before we pit them against one another. Stop by in two days’ time and see how the other half lives!