With Mirrodin Besieged behind us and the Event Decks about to be released, playing a few games of Duel Decks: Elves vs Goblins seems like a throwback to a simpler time, and in that spirit Jimi and I join battle behind two of the game’s most ancient foes. We’ll be back with the Mirrans and Phyrexians soon, but for now, there’s an even older battle to be fought, an enmity that spans times and planes. The haughty elf. The scrappy goblin. Two decks, three games.

Here are our notes.

After an opening round involving a Mountain and a Tranquil Thicket, Jimi’s turn 2 play gets things moving in the right direction. It’s a Mogg War Marshal, and naturally he’s brought one of his buddies along with him. Still, I’ve an effective answer in the form of a Wren’s Run Vanquisher (revealing Wood Elves to get it on the cheap), which should keep things suitably quiet and give my elves some time to develop.

Jimi’s turn 3 is a bit hobbled by having to pay the echo cost on the Marshal, so she plays a Skirk Prospector and passes. I go ahead and drop the Wood Elves, fetching up another Forest. With Jimi able to tri-block my Vanquisher for a trade and lose only one card in the process (the Marshal would simply spawn another 1/1 goblin on the way out), I keep her at home and pass. Jimi solves her anyway with a Spitting Earth, then sends in the Marshal and her 1/1 token for 2. I take the damage, and at the end of her turn cycle a Tranquil Thicket from my hand. For my part, I lay down a Lys Alana Huntmaster, looking forward to more token shenanigans in the turns to come.

Speaking of shenanigans, Jimi plays some of the Boggart variety on turn 5, then swings in with the team for 3. I play a Wirewood Lodge, then play an Imperious Perfect (+1 token), swing for 6 with the Huntmaster and Wood Elf, then tap out for an Elvish Warrior (+1 token). Priming an Elvish Promenade in hand, the elves are about to erupt.

Then everything goes to blazes in the form of a Skirk Fire Marshal. Including the Boggart Shenanigans, Jimi has exactly five goblins on the table and she taps them all. She then responds to her own trigger by popping the Prospector for a Red mana and using it to send a Tarfire to my face. The War Marshal goes off, dealing 10 damage to each player and creature. My board is wiped, and Jimi loses a goblin token and the War Marshal, both of which trigger the Shenanigans to ping me for even more damage. The dying War Marshal replaces himself with another 1/1 goblin, and the Fire Marshal’s protection from Red keeps him from being caught up in his own blast. That’s the game right there- even with a board presence, Jimi’s goblins would kill me through dying to my blockers.

I’m in a tight spot right away as I mull down to 6 and opt to keep a one-lander. It’s not great, but I have some consolation in some ramping with Llanowar and Wood Elves firmly in hand. I start with the Llanowar and pass, Jimi has only a Mountain to play. I send the Llanowar in next turn for an early point of damage, but otherwise have no play- that second land eluded me. Jimi drops another mountain, and back again is the Mogg War Marshal.

Now turn 3, I draw an Elvish Eulogist. No Forest, but at least it’s something I can play. After summoning her, I pass to Jimi who’s only actions are to pay the War Marshal’s echo, drop another Mountain and swing in for 2. I catch a lucky break on the turn following as I finally draw that critical second Forest, and down comes the Wood Elf to fetch me another. I swing in with the Eulogist and pass. Jimi keeps the aggression up by playing a Skirk Drill Sergeant after attacking in for another 2. It’s now 18-16 in Jimi’s favour.

I swing for the fences on turn 5, sending in my three elves. Jimi rightly smells a trick and declines the block. She’s right, but it’s worse than she suspected- I cycle a Gempalm Strider and hit for another 6. Jim draws a Forgotten Cave, then swings in for 3. She plays a Flamewave Invoker and passes. I send my three amigos in one more time, and again Jimi declines the block. Surely lightning couldn’t strike twice, right?

Wrong. I cycle another Gempalm for the win. 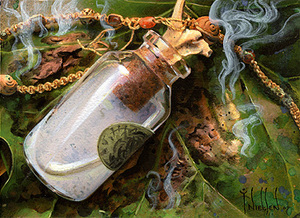 Jimi gets things started early with a Goblin Cohort on the first turn, while I lay a Forest and pass. A second Cohort drops next turn, allowing the first one to swing for 2. Me? Another Forest and a pass.

Jimi adds an Emberwilde Augur to her forces the turn following, and this now allows both Cohorts in. Turn 3, and I’m at 14 life- not a bad start for the gobbos. I finally drop a body in the form of an Elvish Harbinger, and tutor myself up a Wren’s Run Vanquisher. Back to Jimi, she swings with the Augur then lays a Boggart Shenanigans. I look to stabilise with a Lys Alana Huntmaster, and with the solid options in hand (including a Gempalm Strider, Imperious Perfect, and Elvish Promenade) I only have to hold out a little longer.

Jimi’s not in a cooperative mood, and plays a turn 5 Ib Halfheart, Goblin Tactician to prove it. She then sends in her bruisers, and I decide to trade the Huntmaster for the Augur to prevent her from sacrificing it next upkeep for straight burn to the face. I take 4 from the Cohorts and another 1 from the Shenanigans, and I’m down to 7. In dire straits, I deploy a Moonglove Extract to solve Ib and pass.

Unfortunately, Jimi lands another creature next round (Mogg War Marshal), allowing her to again mobilise the Cohorts. I pop the Extract to kill Ib, taking another point from the Shenanigans and am down to 2. Even discounting the Cohorts, Jimi has two 1/1’s on the board. I’m dead if I play blockers, and dead if I don’t. I scoop on the spot.

It seemed like no matter which way I turned with these decks, I still lost. I dropped two with the gobbos against Sam, and two with the elves against Jimi. Now that’s balance! Just as importantly, I can’t deny for a moment that it wasn’t a blast to play these decks.

Elves did everything you could ask of it, and losses happen. It gave me mana ramp when I needed it, bodies when I wanted them, and the threat of explosive growth all the time. The only thing it didn’t deliver is the one thing it couldn’t- solid removal. Even with the inclusion of a trio of Moonglove Elixirs, there’s only so much it can do.

In the design and development article about the decks, Devin Low addressed their approach to the lack of removal in Green thusly:

Since the Elves were staying monogreen, we used other methods to address the historical disparity in removal. To let the Elves burn back, we gave the Elves three Moonglove Extracts, a Lorwyn direct damage card any color can use. And we made sure that the Elf deck had more “must-kill” targets than the Goblin deck, so that even the Goblins’ many burn spells would be hard-pressed to take care of them all. Putting multiple 3-toughness Elves into the mix, from Elvish Warrior to Lys Alana Huntmaster to Wren’s Run Vanquisher, also helped set up an Elvish defensive line that could give the Goblins’ 2-point burn effects and 2-power attackers some serious holdup.

Overall, we’d say he succeeded- seldom did the elves’ lack of removal feel like the cause was hopeless, and just the same the generous amount of burn available to the Goblins didn’t make it feel that the outcome was inevitable. The decks are splendid foils of one another.

Misses: Lack of removal; slower mana curve vulnerable in the early game, though this is part of the balance of the two decks