For our next visit to the city of Ravnica, we’ll be looking today at the ruling body of the city- the Azorius Senate. Naturally, a city needs a governing body to function, and the Azorius guild is Guildpact-bound to maintain that duty. They don’t enforce the laws (that’s the job of the Red/White Boros Legion), but they do legislate them. To the Azorius, they are all that stand between Ravnica and sheer lawlessness and societal breakdown. To the common Ravnican, they are pompous windbags stuffed to bursting with overinflated self-importance.

Although the truth probably lies somewhere in the middle, as so often it does, we are less concerned today with the character of this powerful group, and instead looking to assess that power itself. The Azorius Ascendant deck, a Blue/White creature-control construction, arrays many of the forces at their disposal. These forces are focused around defensive creatures, evasive flyers, and the Forecast ability:

Forecast is a very interesting mechanic that contains within it- like many of the Ravnican mechanics- a bit of dynamic tension. For the Rakdos, the tension is between emptying your hand (leaving yourself somewhat exposed), and maximising your cards’ abilities through Hellbent. The Simic Combine asks you to assemble your eggs into a series of increasingly smaller baskets through the use of Graft.

For the sartorial Azorius, that tension will be whether to cast a spell… or to save it in your hand so you can Forecast it over and over.

Forecast is found on both creature and noncreature spells, and the Forecasted ability is usually thematically tied to the card itself. For instance, the Paladin of Prahv is a 3/4 Human Knight that has pre-lifelink lifelink (lifelink before it was given the name). You can cast him and get him on the field of battle, bashing away and upping your life total, or instead you can hold him back and use his Forecast ability each upkeep to make one of your other creatures have lifelink for that turn.

As you can see, the deck is going to challenge you by how you opt to play your Forecast cards. It’s worth noting here that there are no tricks with Forecast- it can only be done during your Upkeep, and only once each turn (per Forecast card). Nothing up the sleeve, no last-minute surprises, but tremendous advantage if played well.

That said, let’s jump right into the deck, beginning with its hefty creature component- all twenty-six of them.

Only the Oath is Eternal

Like many modern governing bodies, the Azorius Senate feels they do their work best when little is actually done. That may sound cynical, but from their perspective, if you’ve got a good thing going and are holding back the unwashed tides of chaos, why change things up? Put another way, if it ain’t broke, don’t fix it!

This theme of a static society, of adherence to the status quo, is reflected throughout the creatures of the deck. Indeed, dividing them up into thtree categories- closers, air force, and defensive-minded- you’ll find that nearly 60% of them fall into that latter category. No statues these, most of the Defender creatures brings along with some special ability, be it damage prevention (two Benevolent Ancestors), Essence-Scatter-esque countermagic (three Soulsworn Juries), massive defensive bodies to kill almost anything sent your way (two Stoic Ephemera), or untapping a target permanent (three Tidewater Minions). Of course, the inclusion of a Wakestone Gargoyle means that your defensive bulwark can turn into a lethal assault with just two mana.

Non-defender creatures included here are the Azorius Guildmage (can tap a creature and counter activated abilities), a Master Decoy/Blinding Mage variant (two Minister of Impediments, more expensive to cast but cheaper to activate), and the the truly abysmal Zephyr Spirit. (Unable to come up with a redeeming feature of the card, we paid a visit to the comments section on Gatherer and found… only derisive comparisons to Chimney Imp. Sorry, we tried.)

Of course, Defender creatures win few games on their own, and that’s where the remaining 40% of your army comes in (assuming you don’t pull the Gargoyle).

The first threat vector the deck looks to is the skies- a full seven non-defensive creatures comprise your air force, with an additional three of your four closers flying as well! The ultra-efficient Azorius First-Wing is as good as it gets here, and a 2/2 flyer for two mana is a fantastic deal (the ‘protection from enchantments’ is a nice perk, and barely qualifies as a ‘drawback.’) The deck packs in two of them, and tragically throws in a couple of Mistral Chargers for good measure (we’d have rather had two more of the clearly better First-Wings). Lastly, you have a trio of Beacon Hawks, which while weak have some decent synergies with some of the other activated creatures and enchantments found in the deck. Not a great deal, but a decent enough card and a mana sink for your free-floating Plains.

Finally, we come to the closers, all four of them. It’s probably a stretch to call the aforementioned Paladin of Prahv a closer, for he’s a mere three power on the ground, but the lifelink can give you some extra cushioning in close games. The twin Sky Hussars are splendid, with both a solid enters-the-battlefield ability and a truly useful Forecast one. Of all the Forecast cards present, you’ll likely find yourself holding on to this one the most. The card advantage can really add up, and if you have a defensive stall with your opponent (which you will, if things are going even reasonably well) you could do worse than to hang on to one of them. That said, all the drawn cards in the world won’t win you a game, so if you see the sky lane is clear, you’re probably better off casting him and getting stuck into your opponent.

Finally, we have the “guild champion,” Isperia the Inscrutable. Five mana for a 3/6 flyer is a reasonable deal, but it’s her combat damage ability that makes her worth a second look. In short, it’s another way to gain card advantage over your opponent, though you might have a hard time getting much mileage out of it against the hand-dumping Rakdos player. Three damage per turn isn’t a fast clock (7 turns on its own), but it is a nice addition to your forces and at an attainable cost.

Before moving on to the noncreature spells, let’s take a glance at the mana curve:

To be certain, the deck has a nice focus in the early-to-mid-game, but the heavy concentration of expensive critters makes us a little cautious. Had more than a quarter of them some cheap Forecast ability that would prevent them from being an effective mulligan at the start of the game we’d be a little more forgiving, but perhaps the walls (and small ribbon of lifegain) will buy the necessary time. Now, about those noncreature spells… 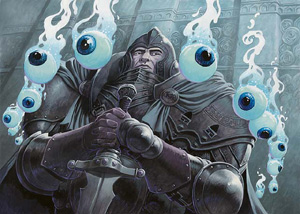 First, the bad news: Azorius Ascendant’s removal suite consists of: one Faith’s Fetters, two Plumes of Peace, aaand… that’s it, three whole cards. Don’t count on them to do your heavy lifting. Instead, you’ll want to use the tools the deck provides you to control your opponent more than to manage them, mainly through locking down their best creatures and putting up a wall to deter the rest. Plumes of Peace, for instance, is a solid Forecast card, allowing you to clear a defender out of the way of any attackers you might have, round after round.

There are three creature auras as well- a Sinstriker’s Will (rather mediocre overall, but superlative on a Tidewater Minion or Stoic Ephemera) and a pair of Ocular Halos which, if you can get them to stick, quickly pay for themselves. The lone Halcyon Glaze is a conditional creature disguised as an enchanment, reminiscent of some Urza’s Saga cards that ‘woke up’ to become critters. It’s a nice way to do damage, and it’s sheilded from all removal save instant-speed.

The other enchantment- Palliation Accord– is a rather lukewarm game-prolonger at a somewhat prohibitive cost (there’s a lot of other things we’d rather be playing here), but it’s fodder for a slow turn and does synergise well with all the locking down of your opponent’s critters you’ll be doing.

Finally, we have a pair of combat-trick instants, Steeling Stance and To Arms! (trivia: how many other non-Un cards have an exclamation point in their name? Answer here). The Stance isn’t all that sexy, and its Forecast ability is fairly poor (remember, you have to Forecast during your upkeep). In most cases, it will likely be better to keep the fact that you have the trick in your hand to yourself and try to blow out your opponent (or finish them off). To Arms! is a much more useful card, not least because it replaces itself in your hand and it’s cheap. With as many activated abilities that require tapping as part of their cost that your critters have, getting a second crack at them is no small gift.

We’re huge fans of cycles in Magic, those sets of cards that correlate to one another in some thematic way, so the Ravnica block precon cycles are a big hit for us. Each deck contains that guild’s uncommon nonbasic land, the Guildmage, and the guild’s “champion” creature. For Azorius Ascendant, that nonbasic land is Prahv, Spires of Order. Prevention of all damage from a single source is a very solid defensive ability (especially against Red, which delights in burning out your creatures and then burning out you), and it’s very significant that it’s unrestricted (you can save a creature’s bacon), but at six mana you’ll want to be very careful in using it. Between activated abilities and Forecast, the deck is a mana hog and you’ll need to be cautious about how you spend your resources. To wit:

Overall, the deck looks like a lot of fun for those who enjoy hiding behind impregnible defenses and wreaking havoc and mishief upon your opponent (raise your hand if you love Moat). We’ll take the Senate onto the field of glory, and report back in two days on what we found there.