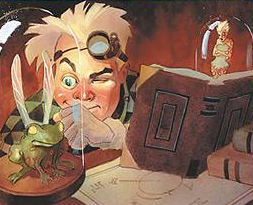 A little over a year ago, I stopped in at the local comic shop and bought three packs of Zendikar and an intro deck. I’d been away from the game for many years, but had decided I wanted a game and hobby that was more socially interactive with my family than World of Warcraft (protip: running a successful guild can take up a lot of your time). Eager to make up for lost years, I scoured the internet for Magic-related websites, and turned up plenty. I found Mana Nation, which I use as my “home site” to this day; Quiet Speculation, whose emphasis on “financial Magic” intrigued me (the stock-ticker-esque price tracker is just plain cool) despite being a most reluctant trader by nature; and of course the premium sites such as Channel Fireball, Star City Games, and so forth.

I found plenty to devour, but over time I eventually noticed to my dismay that resources for the newer or returning player were greatly underrepresented. Most content (by volume) seemed to be angled towards the competitive, aspiring Magic player. With focus on strats, tech, and ‘innovations’ there was plenty to read about the ever-evolving metagame on the pro circuit. Lagging behind but definitely present was the content focused on the casual player- new theme/tribal decks, EDH builds, multiplayer, variants, etc.

But what I most wanted to read then didn’t seem to be much on the radar at all: namely, instructional pieces designed to illustrate the game to the new or returning player, aimed for that player. Much of the Magic strategy I’ve since picked up has been from poring over the lastest Standard trends and applying that to my own game. It works, but it’s not all that efficient.

Ertai’s Lament has given me a chance to start producing content for that niche, and a great deal of the feedback we get here has echoed that sentiment. New or returning players, many of whom use precon decks as their entryway to the game, appreciating discussion of the game’s fundamental principles laced throughout the deck reviews. Not from 10,000 feet on the Pro Tour circuit, but at the ground level of the game where precon decks thrive.

So that brings me ’round to the news. As of today, Quiet Speculation has relaunched itself. From its origins as a “Magic finance’ site, it is now diversifying its content, and brought onboard a raft of talent to make it a successful, general-interest destination. Want finance? It’s still there. Strategy? That’s there too. So are casual builds, Standard builds, and even rules interactions and judging.

And beginning this Thursday, I’ll be there once a week as well. My column, Magic Beyond the Box will center around Magic’s preconstructed products, just as here, but with a finer eye towards going deeper into those ground-level fundamentals of the game. If you’re a new or returning player, or know someone who is, it’ll be well worth a read! I’ll be under the casual side of things, and our editor is none other than Adam Styborski, who also pens for Mana Nation and Magicthegathering.com’s “Serious Fun.” (You can read his introductory piece here.)

Let me be clear: Ertai’s Lament isn’t going anywhere. We’re still committed to providing a deck review every other day, a challenge we set for ourselves at the start of the site that we’ve never broken. For those who enjoy that content, it’s here to stay. And for those wanting to go a little deeper into the basics of the game, we’ll be over on Quiet Speculation. Come check out the new site!