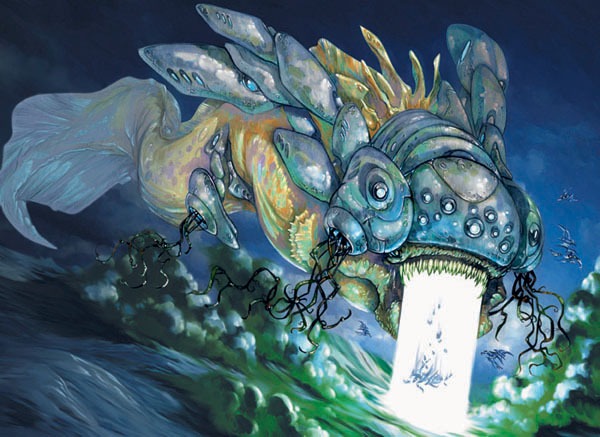 Once again we return to the lair of the Mad Machinist, and continue our Frankensten-like work on a hybrid deck combining the best elements of three different preconstructed decks! In the past three episodes of Ertai’s Trickery, we’re looking to build a powerhouse Artifact deck out of the 180 cards afforded us by Planechase’s Metallic Dreams, Archenemy’s Assemble the Doomsday Machine and the Tezzeret deck from Duel Decks: Elspeth vs Tezzeret.

In earlier articles, we’ve narrowed the colour scheme down to Blue/Black, and have made early rounds of cuts on our removal, and selected cards that would give us a steady dose of card advantage.

By the end of today’s column, we’ll have our second round of cuts comeplete, and ready to start deckbuilding! All that remains are critters, counters, and miscellany, and we’ll hit them all today!

A Pinch of Countermagic

This one’s easy, as there are only two counter effects in the entire batch: Foil and Wizard Replica. The Replica has an advantage in that it comes with a 1/3 Flying body, but the counter itself is quite weak (a lesser Mana Leak, essentially). The other- Foil- is a rather clunky counter as well. Essentially a “fixed” Force of Will, it commands a very steep price regardless of which method you use to pay it- the drawback of versatility! The nagging voice of reason tells me to cut it altogether, but I always feel better when I have recourse to countermagic, however thin. It may not make the final cut, but I’m not quite ready to sever ties.

A Bit of Garnish

Before we get to the main course (the Creatures), let’s take a look at all the other cards that didn’t quite fit into a niche but may be useful all the same. First we have three pieces of Equipment: Cranial Plating, Loxodon Warhammer, and Lightning Greaves. Each of these are very strong here, and easily pass to the next round.

Two additional cards are non-Artifact: Fabricate and March of the Machines. I like them both. Fabricate is about as good a tutor as you can hope for here, and should provide tremendous versatility- the card you need, when you need it. March of the Machines is a good ‘alpha strike’ card, but I’m concerned it might nuke my Artifact Lands when they become 0/0 creatures. It, too, makes the cut, but will need some thoughtful consideration before including.

Energy Chamber has been a very solid performer in Tezzeret, and as I’m beginning to see something of a subtheme here with +1/+1 counters, it stays as well.

That leaves five that didn’t make the cut. Sun Droplet does nothing but give you a small trickle of life, and while it’s nicely costed I just don’t want to devote a card slot to so marginal an effect. In the absence of White mana sources, Batwing Brume becomes even more marginal, an ultra-conditional Instant damage spell that is almost certain to sit in the hand for too long waiting for the ‘right’ time to be cast. I’ll pass.

I’m passing as well on the Thunderstaff and Skullcage. I like them both somewhat in the right environment, but this doesn’t seem to be shaping up to be that environment. Lastly, and this might well be the most contentious cut for some, but I’m leaving out Darksteel Forge.

Darksteel Forge, am I crazy? Everything… indestructible! What could I be thinking?

Well, I’ll grant that the card is pretty close to an insta-win (and far closer than the abysmal Door to Nothingness also contained in Metallic Dreams), but what most troubles me is its draw-to-cast ratio. We have some solid mana accelerants in conssideration, but even still havign a 9-casting-cost card in hand is essentially handicapping myself for most of the game. The Forge is awesome. But I want games under control well before I have nine mana free. It’s an unkind cut, but a necessary one.

This one is quite possible the most interesting, but also the most vexing. Quite simply, there are a ton of superb critters to choose from in our card pool. For simplicity’s sake, I’ve divided them up into definites, maybes, and cuts. Definites and maybes will pass on to the next round, cuts get to go home.

Esperzoa: A small drawback (unless we can mitigate it with enters-the-battlefield Artifacts) is easily worth a 4/3 Flyer for only three mana. This jellyfish is a steal.

Master of Etherium: Not only are these one of the best cards available to us in our pool, but there are two of them (one each from Planechase and the Duel Decks). With the amount of Artifacts and Artifact Creatures we’ll have in play, an absolute slam dunk.

Master Transmuter: She’s a great way to get around Artifacts with prohibitive casting costs, but of course requires a conditional set-up. But she’s also a great way to spring a “surprise” Creature onto the battlefield.

Steel Overseer: This M11 beauty has a definite home here. Although- astonishingly- none of these three decks included a Voltaic Key, I’m quite confident that even at one use per turn, he’s still worth the slot.

Synod Centurion: A 4/4 for four. If his drawback ever becomes a problem, we’ve got bigger things to worry about.

Arcbound Crusher: If we work this deck with the +1/+1 counter angle, this fella can get huge. Still, a 1/1 for 4 needs to be awesome, and I’m not sure the Crusher is.

Architects of Will: Decently costed and with Cycling, the fact that it’s enters-the-battlefield ability can be used on any player is a nice bonus. That said, it’s not an Artifact.

Arsenal Thresher: If you haven’t guessed by now, cards that require certain conditions to be met to be optimised are greeted with suspicion. This one’s borderline.

Broodstar: I’m going to include an ‘Affinity behemoth’ without a doubt. The only question is, which one(s)?

Juggernaut: Since most of Elspeth’s minions will be weenies, I like a 4/4 better than a 5/3- it’s a harder trade for Elspeth to arrange. The Juggernauts cost the same as the Synod Centurion but have an auto-attack drawback the Centurions don’t. That’s why you read about them above, but these ones here.

Lodestone Golem: Another 5/3, but without being forced to attack each round he could hang back and be a nuisance all game long. That said, he’s not a top performer against Elspeth’s deck- with a gutshot hole in the middle of her mana curve and most things being cheap, the Golem would be less of a burden than against other decks.

Lodestone Myr: Another 4-costed little guy, the buff he can get might be lovely if enough Artifacts make it through that don’t care about being tapped. Very conditional.

Myr Enforcer: Two of them, and almost definites. Affinity is conditional, but should make these abusive later in the game. A 4/4 seldom doesn’t matter at any stage in the game.

Clockwork Condor: I like the flyer, but these Clockwork beasts don’t seem consistent enough for me. They’re great fresh from the factory, but wear down fast. If it only lost a counter when they blocked, I’d be much more enamoured of them.

Sarcomite Myr: Just didn’t do enough to justify the three mana. Not even with the nifty ‘draw a card’ activated ability.

Summing up, we have:

And now, all the easy work is done… now comes the hard (but fun) part! Join us in our next column, when we fully assemble our deck from the remaining cards, then the column concludes when we take it into battle. See you then!