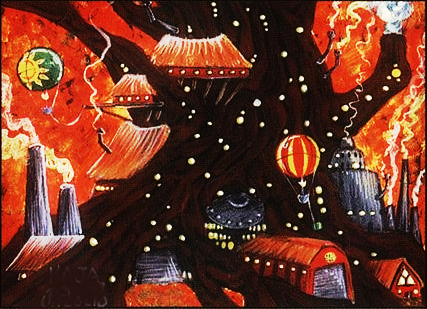 Welcome back to the next installment of Ertai’s Trickery! We’re back in the machine shop, exploring the considerable number of trinkets and artifacts we’ve salvaged from Metallic Dreams, Assemble the Doomsday Machine, and Tezzeret with an eye to assembling the most powerful, most lethal, and most foe-crushing collection of 60 cards we can, before leading them to bloody retribution against that most nettlesome, meddling Planeswalker, Elspeth! Muahahaha!!!

Sorry, got carried away there  for a moment. Anyway, in our last installment we made all the easy, colour-based cuts. Since the Mad Machinist’s Mash-Up is going to be Blue/Black, we’re now down to only those cards that will work within that framework, but we still have way too many for a deck. It’s time for the next round of cuts, and some difficult decisions.

The very first thing we need to do is decide on some of the fundamentals on how Mad Machinist is going to play. We know from playing the three source decks that Artifacts have a bit of a rough way to go in the early game, and tend to focus on controlling the board by mid-game, then crushing in with the artillery for the win.

Because our deck will ‘come alive’ in the mid-game, we need to think of how we’re going to get there. With the cards we have to draw from, we have two options here.

Option One- Defensive: This playstyle looks to clog up the midfield with asymmetrical, defensive-minded critters to slow down the enemy’s onrushing forces. Cheap, effective critters and effects that dissuade your opponent from attacking are the order of the day here. The weakness with this approach, though, is that if you’re up against a less Creature-focused foe, you’ve gone through a whole lot of trouble for potentially less reward.

Option Two- Ramping: This path says “to hell with what they’re up to, if we’re at our best in the mid-game, let’s just get there as fast as we can!” Packing in mana acceleration, this style is vulnerable to an early rush that could destabilise the board before we’re able to really get into a comfortable position, but the upside is that it’s viable regardless of what we’re facing: more mana in the early stages of the game is never a bad place to be.

Another scan through the cards makes my mind up for me. With the resources we have available to us, we have much better ramp options than defensive ones. The good news is that some of the defensive ones might stick around awhile yet to be used in other ways, but the pure Weenies and defensive cards are cut.

Now that we know we’re going for a mana-ramping style of Artifact deck, we’ll continue nailing down some of the fundamentals that can easily be integrated into this framework. We’re bursting to the gills with citters and beaters, so we’ve no shortage of options there. But just as important, we need to find ways to deal with the other person’s threats: we need removal.

As we saw with Tezzeret, there’s not a lot of quality removal to be had in Blue (only Green is worse), and usually that takes for form of bounce (returning a Creature to its owner’s hand). While bounce has the disadvantage of not being a permanent solution to a problem, it does mitigate this somewhat with versatility- if your best critter is about to die, bouncing it back to your own hand can keep it out of the graveyard and ready to be re-cast. And of course, bouncing token creatures (like those pesky Soldiers) back to hand kills them.

For bounce, we have a Whiplash Trap, which is nice because it hits two targets and has a very reasonable Trap condition, an Echoing Truth, three Aether Spellbombs and a Synod Sanctum. The Sanctum only affects permanents we control, so it’s more of a ‘defensive bounce’ (and not to hand) with a few other gimmicky interactions (usually with critters who have an enters-the-battlefield ability). It’s just not what we’re looking for here. We found Echoing Truth to be brutal against Elspeth if she gets out a number of Soldier tokens, and since we’ll be facing her down at the end of our journey, its place seems safe. The Spellbombs are wonderfully versatile- if there’s nothing useful to bounce, you can always cycle them for another card. While it’s unlikely we’ll be wanting three copies in our finished product, we’ll save those ‘refinement’ cuts for later. For now, we know what we’re after.

Our next pass through removal will be focusing on things that have the ability to deal with a threat outright, rather than simply returning it to hand. The good news is, we’ve got a lot to choose from. The bad news? Despite the presence of Black, our selection is a bit spotty.

There are four cards here that are not Artifacts, and let’s look at those first. We have a pair of Agony Warps, a Spin into Myth, and an Unmake. Agony Warps are cheap, easy to cast, and versatile- if attacked by two (or more) critters, we can often kill one and mute the damage from another. Although Spin into Myth doesn’t actually kill anything, it’s a handy way to flush something back into the bottom of your opponent’s library (and yes, it kills tokens too). It’s the last card, Unmake, though, that’s so troubling.

There is absolutely no better removal to be found here than “Exile target creature.” It’s simple, works on anything, and whatever it is, it’s not coming back. Further, it’s instant-speed, and requires no fancy shenanigans: one critter, your choice… gone.

The hard part is its cost. In Asemble the Doomsday Machine, it was a no-brainer inclusion as the deck ran both Plains and Swamps. It was always relatively easy to cast with the hybrid mana. We’re not playing White, though, so the card actually costs us

So what, right? Eventually we should be able to get out

by the end of the game, and it’s not like exiling one of our opponent’s critters is ever going to be unhelpful, no matter when in the game it happens. Why not include it anyway?

Well, to fully answer that, we need to understand opportunity cost. Unmake doesn’t just cost us

. It also costs us a card. And it costs us space in our hand. The card, that’s worth it- you’re trading one of your cards for one of theirs. But the space in the hand is the tricky part.

to come on-line so we can play it. We might go five, six, even seven turns sometimes without being able to play it, and for all that time we might as well have one less card in our hand. It does nothing, when we could have drawn something else that would have an immediate impact on the board, and put us in a better position than a late spot-remover (see: Master of Etherium, who also costs three mana). There will be times when three Swamps show up early and allow us to cast it in a more reasonable fashion, but consistency is the key to a successful deck. We don’t want a trash-or-treasure spell that works sometimes, and is a dead draw others, no matter how good the effect is. We want something we can always use.

That leaves us eight other sources of Artifact-based removal. Two of these- Moonglove Extract and Contagion Clasp– aren’t Creatures, but the rest are. The Extract is a bit expensive for what it does, but it has three things going for it. First, it’s spot removal with no activation cost. That means that if our opponent has some nuisance critter out that we’re having a hard time dealing with (see: Goldmeadow Harrier, Loyal Sentry), this solves the problem nicely without having to throw more mana into a solution. Secondly, it’s in Artifact form, which means it will synergise with other cards in the deck that care about how many Artifacts we have in play while we wait for the right target to arrive. Lastly, it targets players too, so has the versatility to get in lethal damage from time to time, as needed.

Next we have the Contagion Clasp, the tremendously versatile (but conditional) preview card from Scars of Mirrodin. You’re usually better off going after smaller prey with its -1/-1 counter: killing a 4/4 critter with the Clasp will set you back 12 additional mana over three turns, but it’s still nice to have the option. There are plenty of counter cards in our pool that will synergise with the Clasp as well.

The rest of the cards- the Artifact Creatures- are a mixed bag. We have direct damage (Razormane Masticore, Triskelion), -1/-1 counters (Serrated Biskelion), an exile effect (Duplicant), land destruction (Sundering Titan) and creature-stealing (Memnarch).

The weakest of these is the Sundering Titan. A 7/10 for eight mana isn’t bad, but we have a ton of top-end beaters to choose from. And against the mono-White Elspeth, the Titan’s landkill is far likelier to do us more harm than good. I’m on the fence with the Serrated Biskelion. I like its removal, however limited, but the deck has other options for its slot that may be stronger. Still, I’m going to keep it in. Should we cut into a deck that’s heavy on adding +1/+1 counters to Artifact Creatures, or buffing them in other ways, the Biskelion could truly punch above its weight.

That’s all for now! As expected, we’re keeping more than we’re cutting, but that will be soon to change. Join us next time when we dig deep into card advantage, and then take an expansive look at the non-basic Lands available to us. See you in two days!