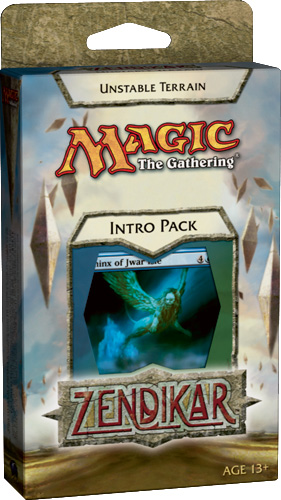 Zendikar’s unique mana and its own fierce ecology combine to cause violent and erratic changes in the terrain. The land shudders and writhes, causing tectonic chaos, extreme weather, and sudden destruction. This volatility is known as “The Roil.” Large boulders and shards of rock erupt from the earth, and then subside when The Roil shifts away. Winds generated by the The Roil turn debris and vegetation into a devastating funnel clouds. Over water, The Roil creates whirlpools that can suck a boat to the bottom of the ocean or waves that crash into high cliffs and flood the forests beyond. (Exploring Zendikar)

Welcome back to the Zendikar set Intro Pack review. Today we’ll be looking at the aptly-named Unstable Terrain, which draws as its inspiration a key feature about Zendikar’s ever-shifting landscape: its turbulence! As explained above, the Roil is the name given to this unstable phenomenon, and as we all know Zendikar is the set where “Land matters.”

With each of the five preconstructed decks drawing inspiration from a different facet of the set, Unstable Terrain explores the Landfall mechanic in a Blue-Green beatdown setting. Indeed, there’s very little here in the way of noncreature threat, so let’s begin with the deck’s main win condition: its creatures.

A Vortex That Devours Everything

Nearly every creature of consequence has some tie in to Landfall and its various synergies in the deck. First, of course, are the Landfall creatures themselves. The two Windrider Eels and the Territorial Baloth both get +2/+2 whenever you play a Land. The Baloth Woodcrasher, not content with so ‘small’ a bump, instead gets +4/+4 and Trample. The Grazing Gladehart rewards you with 2 life, while the Turntimber Basilisk has a limited snipe ability by permitting you to choose a blocker for it (of course, you’re all but certain to lose the Basilisk in the process).

Not enough? Throw in the Roil Elemental, then, which allows you to take control of one of your opponent’s creatures with each trigger of Landfall, not until end of turn but rather until the Elemental leaves the battlefield.

These are, of course, some very hungry abilities. One of the successes of Zendikar was making Land draws later in the game yield more than just frustration. That said, with later-game creatures you can’t expect to be dropping Land nearly as fast as you did in the beginning, so the next task is to ‘game the system,’ so to speak, and maximise your Land draws.

Unstable Terrain gives this strategy solid support, even at the Creature level. Two Sage Owls let you fish both for Land and other answers you might need, and is useful at any point in the game. A Merfolk Wayfinder has a ‘sift’ ability when it enters the battlefield that might net you an extra Land or two to your hand (with luck or a Sage Owl), and the Living Tsunami’s ‘drawback’ is actually something of a bonus here, guaranteeting a Landfall trigger every subsequent round. Lastly, a Frontier Guide is one of the best of the bunch, not only giving you the Landfall every round its activated, but also improving draw quality by thinning out your deck.

That leaves only three creatures that do not directly contribute to or benefit from Landfall, and two of them are more or less filler (Coral Merfolk and Gomazoa). The Sphinx of Jwar Isle, though, is a superlative beater whose peer-at-your-top-card ability is just added gravy (and does let you anticipate Landfalls).

If there’s a flaw here, it is in expense. Remembering that this is a 41-card deck, the back end of the mana curve is just a shade too heavy:

Despite the presence of Green, there are not a lot of ramp options here to get you to that back end reliably.

In fact, looking at the noncreature spells now, there exists only one: a singleton Harrow, and it’s as much for triggering Landfall as ramping. That means you’ll be relying mainly on your creatures to ensure consistent land drops, for the remainder of the spells in the deck are there for Creature support.

In short, there’s a combat trick (Giant Growth), card draw (two Ior Ruin Expeditions), and removal (an Unsummon, two Paralyzing Grasps and a Mind Control). Ta-daa, that’s it. If youre going to succeed in exploring this Unstable Terrain, it’s going to be astride a critter of some sort. Bear that in mind when piloting the deck.

So there then is the victory condition of Unstable Terrain: beat face in the red zone. There are a few tricks and curveballs (stealing their critters with the Roil Elemental, for instance), but it’s quite straightforward, and a good introduction to the functioning of the Landfall mechanic. With these spells added in, here’s the deck’s complete mana curve:

In our next column, we’ll be taking Realms into the field against another Zendikar deck to see how well it stands up!