Welcome back to another edition of Ertai’s Meddling, a semi-regular feature which sees us take a preconstructed deck and use it as the basis for deckbuilding a new, enhanced version. For those unfamiliar with the series, the rules of Ertai’s Meddling are simple:

For many, the ‘Intro Packs’ are the first exposure they have to a deck of their own, and the next step is to modify and improve that deck. The designers of each precon deck are well aware of this, and kindly leave us lots of opportunities to tweak them.

Today we’ll be looking at Power of Prophecy, M11’s Blue/White deck featuring the ultra-efficient Conundrum Sphinx. When we reviewed and playtested the deck, we found that it had some strengths, but that there were some vulnerabilities as well: 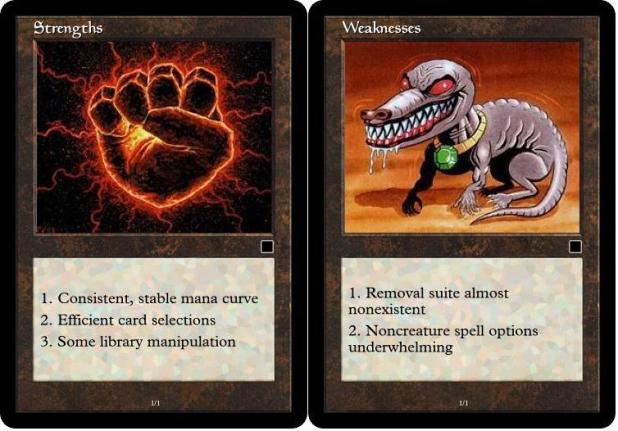 The trick, then, is to preserve those elements of the deck that work, while cutting and replacing those that do not. We’ll be building two versions of the deck- the first will preserve the original colour scheme, and the second will be a mono-Blue construction which will augment the deck’s dominant colour.

Lastly, let’s take a look at the deck as originally constructed, so we know what we have to work with:

In this first U/W revision, we’ll want to stick relatively closely to the formula the deck presents us with. Unlike Green’s role in Reign of Vampirism, both colours have something to offer here.

One of the primary concerns with the deck was the threadbare library manipulation. Ordinarily it’s nice but not central unless the deck runs a combo, but here the presence of the Conundrum Sphinx compels us to offer it greater support- both first to find the Sphinx, and then once it’s out to accrue maximum card advantage. But if we want to add some cards in, first we’re going to need to tighten the belt and make some cuts.

Although this deck is unusually beater-heavy for a U/W construction, we’re still going to snip Mighty Leap and Safe Passage. Combat tricks have their place, but they are conditional and often owe their continued use to the power of the ‘best-case scenario.’ What we’re looking for here to really harness the power of prophecy is consistency- cards that always have a use whenever you draw them, and earn their place in the deck.

Furthermore, we’re also going to snip the two Negates. Although I’m an ardent believer in countermagic, a lonely pair like this doesn’t seem especially critical to the deck. By their nature they are reactive, and Power as mentioned above really wants to be aggressive.

Next, go ahead and strip out the pair of Jace’s Ingenuities. Although we’re losing some card draw, we should more than make up for it with card quality through the filtering that Scry will provide us. In a less aggressive deck I might have kept these by cutting the Sleeps instead, but Power of Prophecy really wants to get stuck in to your opponent.

The last casualty is Solemn Offering. Again, a useful card but not one that suits our purpose. We’re better off tuning up the aggressiveness of the deck rather than waiting for our opponent to play some Artifact or Enchantment that’s vaguely menacing to give us a target. Out it comes.

On the creature side, we’re leaving the deck more or less alone, cutting only some of the more egregious offenders: Armored Cancrix, Harbor Serpent, the two Maritime Guards and the Scroll Thief. These are all critters that have a built-in aversion to combat, and have no place here. The Cancrix and Guards suffer from asymmetrical power/toughness that favours defense; the Harbor Serpent has a bit of a leash on him with the Islands restriction; and that Scroll Thief has a splendid ability but lacks the evasion needed to make consistent use of it. 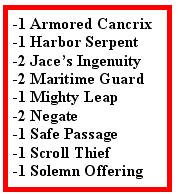 This should give us plenty of room to maximise the deck’s main theme of library manipulation and creature beatings.

Our first act will be to stuff in two more Crystal Balls. Although this might seem excessive, they are relatively inexpensive, aren’t redundant in multiple, and cheap to cast. Useful at any point in the game, they’ll not only optimise our card advantage with the Conundrum Sphinx, they’ll also greatly increase our chances of finding the Sphinx as well.

Still, there’s always room for a little more manipulation, especially with the delightful keyword Scry M11 lets us play with. To that end, one more Foresee and another pair of Augury Owls will have us ripping through our deck to find the spell we need, when we need it.

Because we’re a combat deck, let’s go ahead and up the removal while we’re at it by adding another Condemn and three more Pacifisms. I like both spells, but have opted for an imbalance in favour of Pacifism because it’s more proactive (in other words, it doesn’t rely on the actions of your opponent like Condemn does). As aggressive as we’d like to be with this deck, we’re actually somewhat more worried about getting rid of defenders rather than attackers.

As for our beaters, we’ll replace the Scroll Thief with a Cloud Elemental, and the expensive Cancrix and Harbor Serpent with a pair of Serra Angels.

So voila! Blue/White aggro with a generous stripe of library manipulation! With the fixes above in place, you should not only be seeing a lot more of your Conundrum Sphinx, but should be getting a lot more out of it as well! If you’re ahead in the game or the board is stalled, try to hold on to a Scry card if feasible if you’ve not drawn your Sphinx yet. That way, once it hits the board, you can cast the Scry card and get the most out of the Sphinx while your opponent lamely guesses some Land card over and over!

For our next version, we’ll be dropping the White altogether and making it a mono-Blue “Skies” deck. This is a bit of a gamble, as when you think of mono-coloured aggressive decks, Blue isn’t exactly the first thing that comes to mind. But it can be done!

We’ll start first with the cuts. Obviously, all White spells are out. Still, there are a few more that can go from Blue: Jace’s Ingenuities and Negates. The Jace’s Ingenuities are alright, but I’m looking to cut out variance and add consistency here, and cutting these will help that. Same with the Negates- counters are great, but they’re too reactive for the objective we’re after.

Some of the changes will mirror the deck above, as they work for this version as well. We’re still going to add a Crystal Ball, for instance, and a third Foresee. We’re not going as far in with the Crystal Balls because we don’t need to fix colours- one of the luxuries of a mono-coloured deck- and thus can ease up just a touch on the Scry.

Unlike the previous deck, though, we’ll be throwing another Mind Control into the mix, which acts as a lovely two-for-one all on its own (removes a thread from their side of the board, and adds one to yours).

Lastly, we’ll want a solid dose of removal, though it’s hard to come by in Blue. Working with what we’ve got, we’ll be adding in three Ice Cages and a playset of Unsummons. Don’t be afraid to be aggressive with these if it means you can get in a few more points of damage- more should be coming in subsequent draws to replace the ones you use.

For the Creatures, we’ll be cutting the expected: Armored Cancix, Blinding Mage, Maritime Guard and Scroll Thief all are out. And since we’re focused on offense just a touch more in this mono-Blue variant, we’re going to take out that Wall of Frost as well.

In return, though, we gain quite a bit! A brace of Aether Adepts and Augury Owls should give us the card draw and tempo we need to get in good position early on. We’re keeping the Harbour Serpent this time, as his drawback is much less of a concern now without Plains cluttering things up. 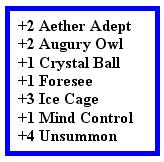 Thank you again for journeying with us on our trek through Power of Preophecy! For those of you who’ve asked for a full decklist after our changes are made, you’ve been heard! We’re currently looking into options with WordPress for such a display. In the meantime, we hope you’ve enjoyed reading this as much as we did tinkering with it, and we’d love to hear back from you. What would you have kept? What might you have done differently?

Shame on us, and thanks to Mart! Accounting for the Solemn Offering and an Island we’d have nicked out of the deck (since we can run a bit leaner with mono-Blue), that leaves two additional slots open to fill on the mono-Blue deck. We’ll leave this to your own meta needs- if your opponents are quick off the starter’s block, round out the removal with an Ice Cage, for example, or against a more deliberative opponent toss back the two Jace’s Ingenuities. The choice is yours!

Finally, in the last ‘cards removed’ graphic, we left the ‘n’ off of Condemn. For all these sins, we apologise to anyone who spent more than a moment scratching their head and wondering what we were up to!