Much like this year’s Archenemy, last year’s Planechase had a deck devoted to Zombies and the Undead. As previously reviewed, Bring About the Undead Apocalypse was a delightfully intricate concoction, particarly when weighed against its predecessor, Zombie Empire. It had fatties, recursion, and loads of ways to cheat the beats into your graveyard for reanimation.

Zombie Empire, by contrast, distinguishes itself with a more Tribally-based theme. There is recursion, but it’s less for cheating the deck’s bruisers into play and more for asset recovery. The deck is single-minded in purpose, and has more or less one win condition: 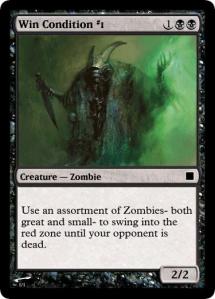 The trick, then, is to do this well, and to give you all the tools you need to accomplish it. How does Zombie Empire fare? Let’s begin by looking at the fundamental building block of the deck: its Zombies.

Grieve for the soul in death dishonoured.     -Shadow Guild saying

The Zombie army presented here could best be viewed as having three distinct roles: Footsoldiers, Generals, and Utility.

The Footsoldiers are those nasties you’ll be swinging at your opponent with, and there are plenty on offer: Festering Goblin, Dregscape Zombie, Cadaverous Knight, Phyrexian Ghoul, Soulless One, Nefashu and Noxious Ghoul are all solid, aggressive choices.

Augmenting those Footsoldiers are the Generals, “Lord” creatures that buff your army simply by being there to lead it: Death Baron, Undead Warchief, and Crovax (Ascendant Evincar) all fill this role nicely. Luck into having all three on board, and each of your Zombies is getting +4/+3 and Deathtouch!

Finally, that leaves your Utility critters. While these work just fine as Footsoldiers in a pinch, they also have nifty little tricks to bring some versatility to your board: Shepherd of Rot, Rotting Rats, Withered Wretch, Gravedigger, Corpse Harvester, and the mighty Helldozer.

When the mana curve is examined, you’ll see that the deck has a solid curve- you should have little struggle dredging up your Zombie army.

If there’s a weakness, it’s perhaps with the card selection at the three-drop slot (two Cadaverous Knights, two Phyrexian Ghouls, and a Death Baron). Although all are useful, there’s no stand-out sexy option that gets the blood pumping when you see it in your opening hand next to a Dark Ritual, but that doesn’t mean those Rituals might not have a better purpose in this particular deck, as we’ll see.

Mourn for the Living

“If there is such a thing as too much power, I have not discovered it.”     -Volrath

A creature army, of course, is only as good as the spells that support it- as anyone whose critters are in standoff with the enemy critters and is praying to topdeck removal will tell you. Fortunately for the would-be Necromancer who seeks to ride Zombie Empire to victory, the deck is packed with plenty of it. Here’s the complete curve to begin:

To start with, there are the pair of Dark Rituals. As discussed in our piece on the Phyrexian Duel Deck, a pair of Rituals is Wizards’ way of saying, “have fun, but not too much fun,” since the spell is almost always either a 4-of or 0-of. Having two allows for occasional fast starts, but not consistent blowouts. With the paucity of nasties at the 3-drop slot, the Rituals are often best saved to power out some of the deck’s more expensive critters rather than getting an early drop on an opponent (as always, let circumstances be your guide).

In addition, Zombie Empire packs a solid- if inconsistent- removal suite. While all of its removal spells are singletons so you never quite know what you’re going to get, most of them are useful at any time (and the others just need enough mana to be effective). Straight-up kill comes in the form of a Hideous End and a Cruel Revival (the latter of which pulls double-duty as graveyard recovery). Innocent Blood’s drawback may seem harsh, but it’s unbeatable for killing off the first critter your opponent plays before you play one, and devastating when you have a Grave Pact out. Incremental Blight is a potential three-for-one (be happy with two), and Consume Spirit can go after your opponent’s beaters or finish off your opponent altogether.

The pair of Enchantments- Grave Pact and Phyrexian Arena– are both game-changers, and should be cast as early as possible. There’s also the “mini-cycle” of Syphons, Mind and Soul (the latter originally a Legends card), which are decent as they are but shine in multiplayer play.

Rounding out the deck are some utility spells. Beseech the Queen fishes something out of your library, while Beacon of Unrest salvages a beater from your graveyard. Both are very useful. And the pinnacle of utility is the multitool card, Profane Command. 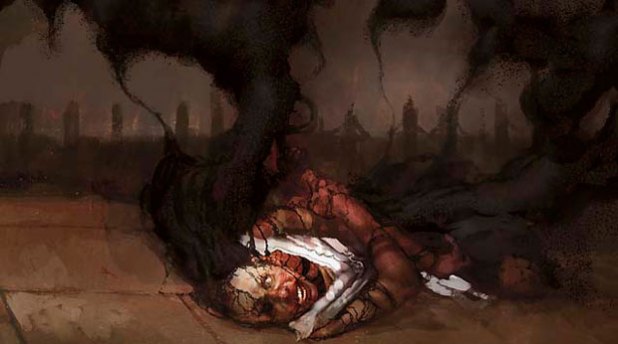 Zombie Empire is an effective deck, although one that suffers from being perhaps a bit too plain and pedestrian, particularly after comparison against Bring About the Undead Apocalypse. Fans of the Zombie style- lay down a relentless string of shambling attackers- will be in their element, though. There’s little subtlety to the deck, and should allow even the most novice player a fun chance to take the reigns and lead the Undead to triumph.