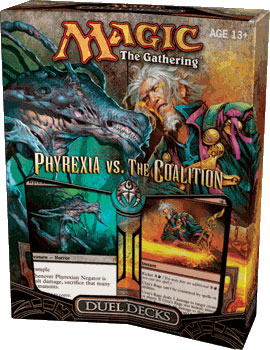 Eager to put The Coalition through its paces to see how well it performs, Sam and I broke out the Duel Decks and faced off for the customary three matches. Would the speed of Phyrexia run roughshod over the more intricate setup of The Coalition, or would I be able to bide time enough to bring my more powerful Domain and creature cards on-line? Here are the notes from the matches.

On the play, Sam drops down a Swamp and passes, while I match with a Forest. I’m pulling ahead next turn, when we each drop another land but I cast Fertile Ground on my Forest. The first threats appear next turn, with Sam’s Phyrexian Broodlings and my Nomadic Elf, and the game’s afoot.

Turn 4 sees the Phyrexians with a Whispersilk Cloak. Sam swings in with her Broodlings, thinking I’ll decline the trade because of the mana utility of the Elf, but I surprise her by accepting. Her turn-5 replacement, the Phyrexian Battleflies, are less worrisome (despite being Equipped with the Cloak) when I pull out Treva, the Renewer.

Running light on mana, Sam Dark Rituals out a Phyrexian Plaguelord, but the dragon’s not to be dissuaded as it swings in for 6 (I elect to pay the extra for a 2-point life bump, declaring Black). I now have an 8-point swing (14-22).

Sam swings in with the Plaguelord for 4, then brings in a Phyrexian Defiler. Any hope she might harbour of sacrificing them both to snipe my dragon and draw even is scuttled when I tap out and play Rith, the Awakener. She sacs anyway to buy time, and Treva hits the graveyard. She then taps some Swamps and plays a Phyrexian Debaser before passing. I cast a Thornscape Battlemage, paying the kickers to kill both her Debaser and the Whispersilk Cloak. Things aren’t looking good for Sam.

Then turn 9 sees her topdeck a Slay, and Rith follows Treva. Her joy is short-lived, though, when I mise an Armadillo Cloak, enchant my Battlemage with it, and swing in for lethal off the Trample. 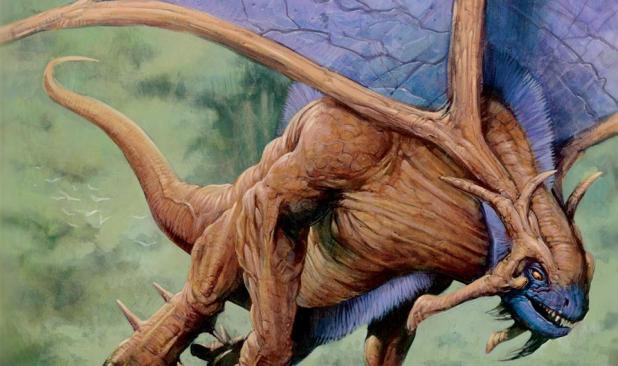 At first, it looks like I’m going to run away with the second game as I play a turn-1 Thornscape Apprentice followed by a Nomadic Elf the turn following, while Sam has nothing but Swamps to show for it. Turn 3, though, and the speed of the deck evens things out: a Priest of Gix followed by a Phyrexian Negator. I look down at the Urza’s Rage in my hand and briefly contemplate punching her in the gut with it by hitting the Negator and watching her sac hard, but decide that the play still wouldn’t solve the Negator problem and opt to bide my time with the Apprentice tapping it down instead.

The next couple of turns see us laying land, with Sam’s play of a Phyrexian Vault the only spell cast until my turn-5 Yavimaya Elder. The Apprentice’s tapping ability keeps the Negator on lockdown, and we’re in a state of detente. The Elder, however, starts whittling away her life as she avoids blocking it (and giving me some precious land as a result). At the end of Sam’s turn 7, I Harrow.

Turn 8 arrives, and I play a Nomadic Elf. The Elder’s done a fair bit of business, as Sam’s down to 14 life. I pass, and Sam plays a Bone Shredder, sniping the Apprentice. I respond by going all in the next turn, swinging with a pair of Nomadic Elves and the Elder. Sam chumps the Elder with the Shredder, but opts to sac it to the Vault instead for an extra card.

By turn 10, Sam has an impressive ten Swamps in play, having not missed a single land drop. With each additional Swamp, my plans at using the Negator’s vulnerability to damage against her slips further and further away (why waste a spell if she’s just going to sac three Swamps she hardly needs, anyway?).

After a turn in which Sam plays both a Phyrexian Denouncer and Colossus, I get in the last of the basic lands needed to max out Domain, and cast an Exotic Curse on the Negator to kill it. Sam wisely sacs it to the Vault in response for the extra card.

Turn 11 in a long game now, and Sam’s finally had enough of the Yavimaya Elder, sacrificing her Denouncer to kill it. Needing to keep some land open for options in my hand, I pass on the chance to sacrifice it myself, and its death brings me a Forest and Mountain. Sam swings in with the Colossus, and I exile it with Treva’s Charm. Sam again uses the power of the Vault, and draws into something wicked. Tapping five, Sam flashes both a grin and a Living Death.

By the time the dust settles, Sam’s army is replenished: the Colossus, Denouncer, Negator, Priest of Gix, and a Bone Shredder crawl back to life. Things don’t look so good on my end, with just a Yavimaya Elder, Thornscape Apprentice, and Nomadic Elf. Adding insult to grievous injury, Sam has enough mana left over to add a Phyrexian Debaser as well. Although I have the Apprentice’s tapdown back and Sam is unlikely to try and untap the Colossus once tapped, I realise my only chance is to hang on and stall until I hit 12 lands and the Urza’s Rage comes online. I’m mostly there. When Sam passes, I play a Charging Troll and pass back.

Once Sam kicks off turn 12, I engage the Apprentice to lock down the Colossus. Sam adds to her army with Phyrexian Broodlings, and looks to have the game well in hand. She sacs the Denouncer to eliminate the Elder and passes. I swing in with my Troll, she declines the block and I exult as she puts herself down to 9 life- she’s now in burn range of the Rage. She’s attacking with her ragtag army, but bolstered by the regenerating Troll I’m successfully stalling for time.

Turn 13 sees Sam dropping a Phyrexian Processor, and she gives up a further 5 life to it in an effort to break up the creature stall, taking her to 4. She also deploys a Priest of Gix. But time’s run out. She’s brought me down to 6 life, but my 12th land comes online and Urza’s Rage steals me the game. 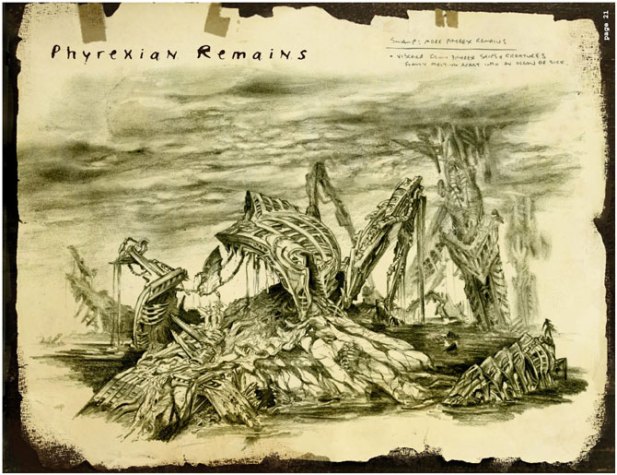 Sam’s hungry for blood, having been robbed of the win on the last game. Our first couple of turns are establishing land drops, then she plays a turn 3 Phyrexian Broodlings. I shrug it off, drop an answering Swamp of my own and pass. That’s when she lands a turn 4 Phyrexian Processor, giving up 10 life for it. At last, Phyrexia has exploded from the gate. I lay a Plains and lamely pass, Harrowing on the end of her turn after she makes a 10/10 token.

The next turn, having no answers, I take a defiant stand with a Thunderscape Battlemage compelling her to discard two. It’s as good as it gets for me. Sam cranks out the 10/10 tokens and sends them into the red zone, while I furiously churn for an answer (it finally comes a couple turns later in the form of a kicked Thornscape Battlemage) and chump block for time (a hapless Yavimaya Elder makes a cameo appearance). Sam responds to the loss of her Processor with a Puppet Strings, which she uses to tap my last remaining creature and stomp me with tokens.

I never had a chance. 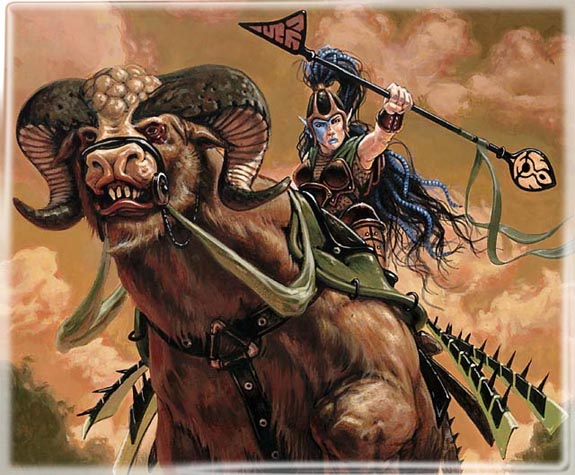 The Coalition is a surprisingly versatile deck. As mentioned in the previous piece on the deck, it does devote a lot of time to mana fixing, but then maximizes the use of its remaining card slots by filling them with cards that have tremendous versatility. The Battlemages and Charms in particular delivered fantastic threat response, with the Thornscape Battlemage being the most brutal against Phyrexia as the 2 damage it could deal would be enough to kill a sizable number of the critters in the deck while nailing another card with the “destroy target artifact” option.

Just as Phyrexia was scaled back on speed to give this deck an even chance, signs are visible that The Coalition was equally tailored with respect to Phyrexia. There’s a scarcity of burn, for instance- obviously the designers had to measure the degree to which the premium “mythic rare” Phyrexian Negator went from being fun to being a liability (Swamp > Dark Ritual > Phyrexian Negator… opponent hits it with a Shock or Lightning Bolt and it’s crippling).

On the whole the deck- while fun- isn’t quite as exciting as its opposite number. If you were to isolate the tension dynamic in each deck, it might be:

Phyrexia: “Will I get an explosive start and kill you early, or will I have to grind out a win in the mid?”

The Coalition: “Will I get enough mana of the right types to take control of the board and beat you in the endgame?”

Although it’s a matter of personal preference (for me, the only thing more fun than Blue-based control is Suicide Black), Phyrexia seems to have the more enjoyable- if inconsistent- dynamic.

On the whole, I would say that the designers balanced the two decks reasonably well, and this Duel Decks set is not hard to recommend.

Cons: “Mythic rare” reprint a flavour selection- even a Fireball would be stronger tactically (uncounterability only matters when your opponent actually has counters- Phyrexia does not); limited removal