It’s taken us eight weeks to get to this point, which has seen a field of nearly fifty decks reduced to only four. It’s been a contest not without some controversy, as non-commercially available preconstructed decks were permitted to suit up and take the field. But at the end of the day, the talking was settled in the red zone.

Sample decks made it to the second round, then died. The Player’s Guide decks fared no better. Intro Packs put up a fight, but in the end, it was one Commander 2014 deck, two Duel Decks, and a Clash Pack deck that won their respective divisions and prepared to see which one of them would be able to take their place in the Hall of Champions.

Kiora races out early, with a Coiling Oracle and Lorescale Coatl. Fortunately for Power and Profit, it solves the Coatl immediately with a Debilitating Injury before it has the opportunity to grow immense. Kiora bounces right back, however, with a 5/5 Nimbus Swimmer and Kiora’s Follower.

The problem for the Clash Pack isn’t a lack of creatures- it leads with a Satyr Wayfinder and Doomwake Giant (killing the Oracle), then bestows a Herald of Torment onto the Giant- a fine start! But after having popped off two Accumulated Knowledges to keep the hand full, Kiora simply sends the Giant back to hand with a Surrakar Banisher.

The tide of battle is firmly on Kiora’s side, until she hits a glut of land. The Clash Pack topdecks a Murderous Cut to solve the Swimmer, and the Banisher dies to a Merciless Executioner. When a Necropolis Fiend lands, Kiora can do nothing but watch her life total while away to zero.

Things look good for Power and Profit when it Brain Maggots away Kiora, the Crashing Wave, but this being a Kiora deck it won’t stay on the battlefield for long. A Satyr Wayfinder begins to grow the graveyard, while Kiora plays a Kiora’s Follower and Man-o’-War on a Courser of Kruphix. While Power and Profit tries to build up a force, Kiora builds her manabase with Exploration and Explosive Vegetation.

Using bounce to get Kiora back, it’s able to keep her protected through Time to Feed and a Sealock Monster, which eventually becomes monstrous and turns one of the Clash Pack’s lands into an Island, which it had not been able to find. Good news- except when an Inkwell Leviathan touches down. Power and Profit does everything it can, including a Necropolis Fiend, but the Leviathan simply grinds it into oblivion.

With so much at stake, Power and Profit goes all in. Early Satyr Wayfinders feed the yard, and a Brain Maggot wicks away Whelming Wave. Commune with the Gods packs the larder, and when Power and Profit finds a Nyx Weaver, it doesn’t take much convincing to swap it out for a Whip of Erebos that fell into the graveyard. And with a Reaper of the Wilds on board, Power and Profit has more options than it has mana.

Over and over, the Whip sends filth across the table at poor Kiora, who hasn’t stuck any real threats beyond utility and nuisance creatures like the Man-o’-War and Follower. A Doomwake Giant and Nemesis of Reason hammer in, but what breaks Kiora’s back are the Whipped threats she can’t stop- the Necropolis Fiend and Herald of Torment. The Clash Pack advances!

Speed lives up to its name, threatening in the early game with a Hell’s Thunder slamming in for early damage, a Krenko’s Command for some bodies, and an Act of Treason to steal Darkness’s first threat, Liliana’s Reaver, for the discard and 2/2 Zombie token.

Unable to capitalize and off a color, though, Speed has to go fishing for a Swamp with Fiery Fall, and Darkness finds its footing. It summons Ob Nixilis of the Black Oath, forcing Speed to have to expend Reckless Abandon to deal with it. Bone Splinters to deal with a Bloodgift Demon also puts it a creature down; Darkness simply Dread Returns it. Though the Reaver is eventually dealt with by a Beetleback Chief, Darkness simply grounds out a win in the air.

Speed gets a much better start this time, opening with a Leonin Snarecaster and- crucially- Goblin Bombardment. The enchantment will nettle the mono-Black deck for the rest of the game.

Next up is a Beetleback Chief, bringing numbers to the board. Darkness trails, with a Skirsdag High Priest followed by an Overseer of the Damned, which kills off a freshly-summoned Ogre Battledriver. A Vampire Hexmage is picked off by the Snarecaster via the Bombardment, and the Overseer is taken for a ride with an Act of Treason before itself being sacrificed.

Though Darkness tries desperately to consolidate its hold, it’s in a tough position. A Hell’s Thunder touches down and swings, only to be Annihilated (and sacrificed in response). It’s unearthed next turn, connects, then gets offered up to Reckless Abandon to seal the win!

Fittingly, this game was a race to the finish line. Speed begins with a Hellraiser Goblin, then follows it up with Krenko, Mob Boss. Sitting across the table in front of Darkness, however, is a 5/5 Lashwrithe, thanks to Myriad Landscape, but Speed keeps Krenko alive by activating his ability to generate two Goblins right away.

Darkness brings out Ob Nixilis, creating a 5/5 Demon, then finds more land from a Burnished Hart. By now, Speed is on a one-turn clock, it just doesn’t know it. Darkness has a Pestilence Demon in hand, and can summon it and activate it once to wipe the board of the Goblin threat (now up to nine Goblins after an early Krenko’s Command). Alternately, it can equip the Lashwrithe to the Demon, soaring in for lethal if combined with Ob’s +1 draining ability.

What it doesn’t count on, however, is Speed finding one last burst of it. It drops down an Ogre Battledriver, then taps Krenko to make ten hasty 3/1 Goblins. Alongside the 1/1 army, Darkness falls beneath a gibbering, yammering host of eager Gobbos!

With Speed on the play, the two decks swap land drops for the opening turn, with the Clash Pack happily finding an Opulent Palace. Next turn, Speed summons a Leonin Snarecaster, while Power and Profit finds a Brain Maggot off of Commune with the Gods.

Now turn 3, the Duel Deck adds a Hellraiser Goblin, turning both creatures sideways for 4. Back to the Clash Pack, it brings out some bad news for its opponent- a Courser of Kruphix. Next turn, Speed is coerced into attacking with both creatures, thanks to the Hellraiser Goblin, and the Courser happily eats the Leonin. The Goblin connects, leaving Power and Profit down to 14 life. Back to the Clash Pack, it plays the Maggot, wicking away Zurgo Helmsmasher from its opponent’s hand. With a good look at the hand, it opts to play a second Maggot, exiling a Beetleback Chief and all but neutering its opponent’s options.

A turn-5 Scourge Devil lets Speed swing in for 7, with the Courser this time opting to kill off the Hellraiser Goblin and fall to 10. Back to the Clash Pack, it swings for 4 with the Courser and Maggots, taking its rival to 16 life. It then summons a Sultai Soothsayer to shore up the backline, keeping a Murderous Cut off of its enters-the-battlefield ability. The next turn is comparatively quiet, with Speed playing an Evolving Wilds and Power and Profit adding a Reaper of the Wilds.

Speed’s turn 7 is a blank, but the Clash Pack snipes the Devils with the Murderous Cut at the end of the turn, setting up a 10-point attack that Speed takes right on the chin. It then summons a Nyx Weaver and passes.

At this point, the game is all but over. Speed lashes out with a defiant 7-point Banefire, then scoops.

Speed leads the charge with a pair of Krenko’s Commands on turns 2 and 3, connecting with some early damage before Power and Profit stabilizes with a Nyx Weaver. On turn 4, Speed sends in its four Goblins anyway, taking its opponent to 15 life. Power and Profit summons one of the nettlesome Brain Maggots, exiling an Oni of Wild Places.

Now turn 5, Speed takes a breather, playing a Mountain and passing. The Clash Pack bestows a Herald of Torment onto the Nyx Weaver, turning it sideways for 5. That backfires, however, when Speed hijacks the Weaver with an Act of Treason, slamming back in for 9 with everything before Shocking the Maggot to get back the Oni. Down to 6 life, the life loss from the Herald lends the game a new urgency, but the turn is a blank.

Speed summons the Oni on turn 7, swinging in for another 9. Power and Profit kills the Oni with a Sultai Charm and blocks a Goblin, taking 2. Back to the Clash Pack, it drips down to 2 life. An Eidolon of Blossoms comes too late to do any good, and it’s checkmate.

After a turn of land drops, the Clash Pack kicks things off with a Brain Maggot, putting Krenko, Mob Boss beyond use. Speed simply plays another land and passes.

Now turn 3, Power and Profit connects for 1 with the Maggot, then drops down a Monastery Siege, naming Khans. Over to the Duel Deck, it deploys a Goblin Warchief. Next turn, the Clash Pack responds with a Hero’s Downfall, killing the accelerator. Thwarted, Speed lays out a Mardu Heart-Piercer, foregoing a raid trigger just to get a body on the board.

Now turn 5, Power and Profit pull ahead with a Reaper of the Wilds, while Speed simply plays a Swamp and ends the turn. Back to the Clash Pack, it attacks in for 4 with the Reaper, then fills up the graveyard with a Satyr Wayfinder and Commune with the Gods, letting it both hit a missed land drop and add Debilitating Injury to hand. Speed lays down a Swamp, ending its turn.

Power and Profit swing in for 4 on turn 7, taking its opponent to 11 before playing a Nemesis of Mortals, but a Fiery Fall in response sees off the  threat before it ha a chance to stick. Back to Speed, it summons the Oni of Wild Places, attacking for 6, but is chump-blocked by the Wayfinder. Next turn, Power and Profit plays an Eidolon of Blossoms, then attacks for another 4 points of damage before casting a Font of Fertility and cracking it. Speed returns the Heart-Piercer to hand (thanks to the Oni) as its turn begins, then attacks with the Oni for 6, dropping the Clash Pack down to 15 (thanks to an earlier Jungle Hollow). It then resummons the Heart-Piercer, picking off the Brain Maggot and returning Krenko, Mob Boss to hand. Finally, it summons a Kathari Bomber, and ends its turn.

Now turn 9, the Clash Pack adds a Nyx Weaver, drawing a card off the Eidolon, then swings for 4. Speed blocks with the Bomber, after which Power and Profit plays another Commune with the Gods to keep a Herald of Torment. With lethal on the board and no answer to an aerial threat, Speed slumps down, a defeated deck. The Clash Pack has done it, and a champion is crowned! 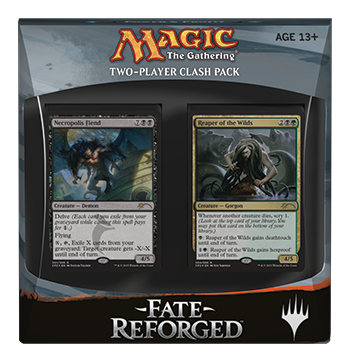 Ladies and gentlemen! Your 2014-15 Preconstructed Champion!