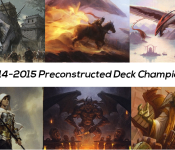 Welcome back! We’re almost halfway through the Championships, with the Rosewater Conference down to its final two contenders. It’s time now to head over to the Forsythe Conference, with some exciting Turian Division action.

We have four matches lined up today, and by the end of it the field of contenders will be cut down by half. One of these decks today will have a chance to go for gold- but first, they have to get past their opponents. Let’s head down to the pit, where the matches are underway!

The Sample deck gets the ramp, with an Elvish Mystic soon followed by another, and churns out modest Green threats like a machine. Runeclaw Bear, Runeclaw Bear, Shaman of Spring…leading into a Charging Rhino. Under ordinary circumstances, this would be a solid start.

But Will of the Masses doesn’t feel like being an ordinary opponent. The Rhino gets blasted with a Devouring Light before it ever connects, and it’s sitting pretty well itself behind a Selfless Cathar and Siege Wurm. But when the Intro Pack lands the Hornet Queen followed by Seraph of the Masses, the Sample deck is in serious trouble.

It finds a Plummet for the Seraph, but that leaves the unanswerable problem of the air. With a congested ground game leaving little chance for decisive breakthrough, the air decides the winner.

In a game that’s like a bad sequel to the first, both sides build up their ground troops, and the red zone quickly becomes too congested for meaningful action. Will of the Masses opens with the Wall of Mulch, then adds a Sunblade Elf and pair of Living Totems.

The Sample deck, meanwhile, finds some Elf ramp to fuel out a Charging Rhino, Centaur Courser, Shaman of Spring, and a pair of Bears. When it goes big with a Terra Stomper, it looks like it may gain the upper hand.

Until Will of the Masses powers out a couple of Will-Forged Golems, denying the Sample deck an effective attack.

Then the Hornet Queen hits…

WINNER: Will of the Masses

Speed lives up to its name, roaring off the blocks with a Krenko’s Command and Leonin Snarecaster, while Power leads with Typhoid Rats and a Necromancer’s Assistant.

Speed lands early shots as it adds more Goblin tokens with another Command, taking the Assistant for a ride with Act of Treason. At least until the Gurmag Angler shows up, which threatens to close down the attack lanes.

Speed bites the bullet, blasting the Angler with a combined Shock and Reckless Abandon, eating a Goblin token in the process. It’s a setback for Power, but thanks to a Taigam’s Scheming, it knows there’s a Necropolis Fiend on the way. It happily uses Merciless Executioner to pick off another Goblin token.

The Fiend arrives and gets in for damage against a depleted Speed, but then Speed– which had struggled a bit on mana- finds that crucial sixth land, and fells the Fiend with Fiery Fall.

Power’s board is suddenly looking quite thin indeed as Speed adds an Infantry Veteran. A Scourge Devil touches down, and lets Speed alpha strike for the win.

Power takes a gamble with its opening hand, which contains a single Forest but curves our majestically including two Satyr Wayfinders. It pays off almost perfectly, with the Wayfinders helping both fill the yard and hit the necessary land drops, with a Necromancer’s Assistant coming next.

The problem is, when you play against a deck called ‘Speed,’ time is a luxury you’re not likely to be afforded. Speed opens its account with Shambling Remains followed by a Mardu Heart-Piercer. Power happily trades the Assistant for the Remains (after taking some damage first), but things go from okay to dreadful when Zurgo Helmsmasher himself touches down to lead his team to victory.

Power goes deep for an answer, firing off a one-mana Treasure Cruise, but returns with slow options like Taigam’s Scheming and Scuttling Doom Engine. With the Remains coming out of the yard for an encore with unearth, Power simply gets buried under the Speed.

Avalanche begins with an Heir of the Wilds, then follows with an Alpine Grizzly. For Freyalise’s deck, it’s an opening Elvish Skysweeper into a Thornweald Archer, which gets traded for the Grizzly it quickly becomes apparent that Guided by Nature may not be outclassed, but it certainly is outsized.

While the Commander deck is dropping Llanowar Elves and Sylvan Safekeepers, Avalanche is going big with a Summit Prowler and (morphed) Woolly Loxodon. Freyalise never gets a foothold, as long s she’s forced to make trades to stay upright. A Lys Alana Huntmaster swaps with the Prowler, Masked Admirers trades with the Heir, and the Commander deck never gets a foothold. It’s a simple matter to seal the game up when a minion gets through, followed by a Titanic Growth.

Guided by Nature has a rampy start, with an early Farhaven Elf and Commander’s Sphere to move it up the chain. Good thing, too, because its hand is a bit weak with a Timberwatch Elf, but it’s racing for a seven-drop Siege Behemoth.

Avalanche has a slower start than last game, but it’s racing too. It leads with an Alpine Grizzly followed by a Temur Banner, and when Freyalise lands the Behemoth, it happily sends in a Thundering Giant alongside the Grizzly, more than happy for a trade.

When the Temur find Bear’s Companion, it looks like Guided by Nature has fallen just short again…until it plays a Terastodon, sacrificing three lands for a trio of 3/3 Elephants. This would normally lead to detente, each side hoping to find a breakthrough, except for one little problem: the bonus clause on Siege Behemoth that states that its blocked creatures can deal damage to the opponent instead. Temur Avalanche is already wounded, and Guided by Nature has 24 power on the board. It ends mercifully quickly.

Conventional wisdom on Commander decks seem to be that they’re vulnerable in the early game, packed as they are with lots of flashy (and expensive) multiplayer effects, but if you give them too much time to take hold, they can put up a serious fight.

The Temur, alas, seem well-positioned to find out the hard way, stumbling on land early and mounting a somewhat feeble army of an Alpine Grizzly and two morphs it cannot flip (Snowhorn Rider, Woolly Loxodon).

Freyalise, in the meantime, assembles quite an Elf engine, starting with a Priest of Titania, followed by Elvish Visionary and Ezuri, Renegade Leader. Things go into overdrive when a Primordial Sage touches down, soon followed by a Timberwatch Elf and Creeperhulk.

The one nuisance the Temur find- the deathtouching Heir of the Wilds (since Ezuri can only regenerate Elves) is wiped aside with a Song of the Dryads. While a lethal Overrun gets countered by Stubborn Denial, the pumping, trampling, regenerating Elves relentlessly grind down their opposition.

Unflinching Assault plays the role of aggro here, getting out a little late with an Abzan Skycaptain, but rushing from there on out after a Raiders’ Spoils gives it some much-needed gas. The Skycaptain is quickly joined by an Oreskos Swiftclaw and Chief of the Scale, and they quickly start to whittle down their opponent.

The Commander deck, in the meantime, hasn’t been idle, but has little to play. A morphed Brine Elemental gets picked off with Debilitating Injury, and Teferi has no play again until an on-curve Sphinx of Jwar Isle. That gives it the narrowest of breathing room, as Assault then uses Honor’s Reward to bolster the Swiftclaw into a 5/3. As it turns out, Cackling Counterpart’s not so good when your beater has shroud. The attacks keep coming, with Teferi forced to play a Dreamstone Hedron in order to enable Lorthos, the Tidemaker.

But at this point, it’s a numbers game. Assault has them, Teferi does not. Oh, and Assault also has a Harsh Sustenance…

With little time to waste, Assault builds up quickly and goes on the offensive, hoping to close out the match. An Aven Skirmisher, Chief of the Scale, and Sandsteppe Outcast begin whittling down Teferi’s life total from the outset, and Teferi’s back on his heels.

Terefi, meanwhile, simply looks to stall while building up. A twice-kicked Everflowing Chalice helps, as does a Sky Diamond and Concentrate. With plenty of resources, Peer through Time only needs to find effective things to do with them. An early, suspended Deep-Sea Kraken promises eventual aid, but only if the game goes that long.

Frustratingly for both, Assault hits a bit of a land glut, meaning the Kraken’s timer ticks down quite slowly indeed. With four bodies on the board, Assault is in fine shape. But then Teferi springs his first desperate gambit, using Aether Gale to clear Assault’s board (while pulling back the Sky Diamond and freshly-cast Azure Mage). Assault has plenty of mana to reset, but an Exclude counters the Sandsteppe Outcast.

As the Kraken hatches, Assault still has reach in the air- and Teferi is hanging on to the game (and the match) by the slimmest of threads at 3 life. That’s when he deploys a Nevinyrral’s Disk, with the ground troops to hold off a turn if Assault can’t find an answer.

It doesn’t. The Aven Skirmisher straks in again for a point, but Teferi lives to trip the Disk- with just enough mana to follow up on the empty board with a Sphinx of Uthuun. Adding injury to injury, a Frost Titan is revealed- and then cast. Assault simply can’t rebuild faster enough, and succumbs to a stunning, come-from-behind beating.

The conventional wisdom was proven right again, as Assault stumbles out of the gate. Stuck on three land, it manages a pair of Oreskos Swiftclaws- and then nothing except useless four-drops in hand. That might ordinarily be enough, but Terefi’s turn-2 Fog Bank is a very effective stall.

Teferi has all the time in the world to develop, putting a Fool’s Demise on the Fog Bank as insurance, then drawing five cards next turn with Rush of Knowledge. A Sphinx of Magosi spells doom for Unflinching Assault– especially after a Frost Titan joins it.

By now Assault has found that crucial fourth land, but far too late. It’s managed to bring out an Abzan Skycaptain and Dragonscale General, but everything just gets bounced by a Distorting Wake. Unflinching Assault never really musters a fight, and goes down weakly.