2014-15 Precon Championships: Round 3 and the Leaderboard

They say time flies when you’re having fun, and they’re not wrong- we’re already one division down with just three to go! This past weekend saw some exciting precon head-to-head action. We’ve got a Divisional Champion, and move on to the Tinsman Division!

First, Kiora put down the Red Sample Deck that was the buzz of the Nagle Division, going to the full three games. Kiora punted the  first game, but came storming back in a nailbiter to put Red to bed. westbrook57 called it as if he’d been standing at the table watching: “They look like polar opposites in terms of consistency, but Red has a ton of reliable early pressure. On the other hand, once Kiora gets ramped up it’s no contest. I’d have to go with Kiora, even though it doesn’t seem statistically likely for her to win.”

As it turned out, most of our predictors tabbed Kiora to advance, and they were right. As it turned out, though, far fewer folks took the point for backing the Dragons of Tarkir Intro Pack, Cruel Plots, which had its work cut out for it against Fate & Fury, the Magic 2015 Clash Pack.

Noted Jeskai Angel, “I think CP has better synergy (good density of sac outlets and benefits for sacrificing) and better spot removal. F&F has some incredible haymakers (e.g. Hydra Broodmaster), and it has some game-changing mass removal (Curse, Aetherspouts) but I’m still going to bet on Cruel Plots to get the job done. #SlumgarMillionaire”

Cruel Plots was able to keep its exploit chains going just enough capitalize on Fate & Fury’s stumbling mana woes, and dropped its opponent in two straight through tight play and a bit of luck. That set up a Kiora versus Cruel Plots conference final, which was almost an anticlimax after so many superb matches.

With only two predictors correctly calling Kiora as the divisional winner, the game was hers for the taking to prove the world wrong. Cruel Plots just couldn’t keep up, as Kiora played backbreakers like the Inkwell Leviathan and Simic Sky Swallower that Cruel Plots had few answers for.

Overall, special recognition goes to Icehawk, who managed to rack up all three points! Not only that, but it vaults him to clear pole position as well. For the rest of the predictors, there is still plenty to play for, and plenty of time ahead! 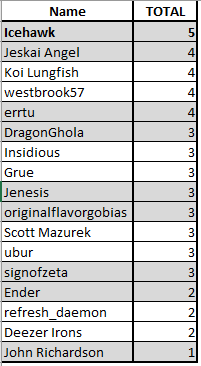 But hey, that’s in the past- let’s get to the future!

First of all, a big thanks to everyone for indulging me in the delay. I’ve learned a valuable lesson already, which is that it’s better to do any qualifying rounds well in advance, rather than try to jam in that many more games in a week.

As a result, the competitive matches this week will go up on this Sunday. That means you officially have until Saturday at 11:59PM to submit your predictions, and as usual any predictions entered prior to the results post going up will be honored.

Now, let’s take a look at the matches you have to predict!

Both decks had to win a qualifier to get here, and both came through in spectacular fashion. Cunning Plan, a Red/Blue spell-heavy deck packing Sage-Eye Avengers and Dragon-Style Twins, beat the comparable and capable Jeskai Monks from Khans of Tarkir. Although the closely-matched series went to three games, ultimately the removal and evasion of the Fate Reforged deck carried the day.

Power and Profit, the combined deck from the Fate Reforged Clash Pack, was the powered-up hybrid of both individual decks. Comparable in power to an Event Deck, it ran into a snare against the well-prepared M15 Intro Pack, Hit the Ground Running. Hit was able to leverage bounce against Power and Profit’s expensive creatures, and had artifact/enchantment removal well at hand for the enchantment creatures and Whip of Erebos. All the same, the power and efficiency of the Clash Pack combined deck was just too much to bear, and Power and Profit ground out its opponent in two straight.

The Red Player’s Guide Deck saw out the Red/Blue artifact-themed Flames of the Dragon, an Intro Pack from Magic 2015, and the Goblin Rabblemaster was the deck’s MVP. Since the Player’s Guide Decks aren’t readily available online, here is its decklist. FUN FACT: due to an oversight/typo in the Magic 2015 Player’s Guide, the Red Deck only lists 58 cards. I messaged Wizards of the Coast about this, but never heard back.

Mardu Raiders, meanwhile, is a Khans of Tarkir Intro Pack deck, and was one of the lucky ones who received a qualifying-round bye. Armed with Ankle Shanker and Cackling Doom, it has yet to be tested this season.

The Sultai deck turned in one of the season’s bigger upsets, upending the Cunning deck from Duel Decks: Speed vs Cunning. The Sultai were able to simply outlast Cunning in the first game, while the Duel Deck sputtered on land the second, falling in two. Luck? Skill? A little bit of both? There’s still plenty of tests ahead for the schemers.

The Green Player’s Guide deck, however, also took an early bye, and so is something of an X-factor going into the first round of competition.

The inclusion of some of these non-purchasable products may have caused some dismay amongst the predictors, but here we have two of them going head to head! The White Player’s Guide deck rallied behind Soul of Theros to trounce the Blue Sample Deck in the qualifying rounds. Meanwhile, the Back Sample Deck vaulted past the White Sample Deck on the strength of aerial threats like Nightmare and Sengir Vampire. Those curious about the contents of the Magic 2015 Sample Deck can check that out here.

So there you have it! Four games to predict for the league this week, and the results will post on Sunday. If you’re new to the competition this week, simply post a comment on which deck you think will win each round, and you’ll be in the running for a prize package of an Eldritch Moon prerelease pack and more than a dozen boosters! Best of luck!

Here’s the recap. As always, ignore the “Game ##”, that’s just what the software assigned it.