At last! The long wait is over and the Preconstructed Championships have returned (one day late, sorry). We’ve got a lot of ground to cover, so I’ll skip the lengthy and flavorful preamble and get right down to business!

The Preconstructed Championships are a semi-annual feature here on Ertai’s Lament, where we take a year’s worth of preconstructed decks (typically core set + block + all releases during that time) and match them up against one another, March Madness style.

The competition is broken down into four divisions spread across two conferences, and each week we cover four matches. You- the reading audience- have the opportunity to predict the winners, and for every correct prediction, you get a point in the “prediction league.” The person with the most points at the end of it is our winner, and wins the prize package!

What can I win?

The prize package for winning is:

So, a total of twenty boosters will be yours if you’re the best predictor!

How are the matches decided?

I’ll be playing these games with my two playtesters, Phil and Josh. My custom is to give my opponent the choice of deck, and from there it’s up to the Fates!

What is the schedule?

So in short, make sure you’re checking in once a week so you don’t miss out on the points!

What decks are competing this season?

There are some changes this season with regards to expanded eligibility. First, we have the usual class of decks that are always eligible to compete:

With the advent of the Clash Pack, we’ll naturally be including them. In addition, a Clash Pack consists of two, unique 60-card decks that can be blended to form a third, 60-card deck. For the purposes of this competition, all three deck lists are eligible to compete.

So that means we’ve got more than 32 decks ready to do battle. In years past we’ve usually not exceeded that number, or maybe just a fuzz above it. In the latter case, we looked at deck ratings and disqualified the worst-rated decks (based on our own reviews). Since these decks have yet to be reviewed here, we instead set up a “qualifying round,” then seeded all of the decks randomly. That’s right, an Event Deck had just as much chance of being seeded for a qualifying match as a Sample Deck, so it’s truly a level playing field.

NOTE: You will not be predicting qualifying matches, just the regular ones. Qualifying matches will already be done by the time we call for your predictions, and you’ll have the same number of matches each week as always.

Okay, got it. So what are this week’s matches?

Here they are! (Please note: the game numbering in the image below reflects the software I use for the brackets. Having “Game 33” as our first game doesn’t mean you’ve missed 32 previous games. I’ll highlight the week’s matches in red to prevent any confusion). 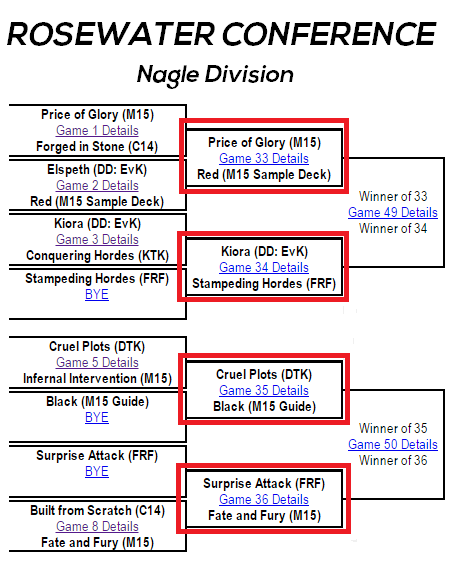 Price of Glory, a White/Black deck that plays shenanigans with lifegain, had the misfortune of drawing Forged in Stone (Commander 2014) for its qualifying matchup. Commander decks fare awkwardly in duels, as they’re often a bit slow to ramp up, but then packed with bombs and rares once the manabase is established.

Price of Glory had to play through its skin to win. In one game, facing down Nahiri, the Lithomancer and loads of Soldier and Pegasus tokens (from Sacred Mesa), it topdecked a Wall of Limbs on the turn before it would have died. That might not seem like the most exciting thing to draw, but with a Soulmender and Staff of the Sun Magus in play, it was able to get just enough +1/+1 counters on the Wall to then sacrifice it for the kill.

Another fairy tale story in the making belongs to the Red Sample Deck. Red was almost surely going to be sent to the showers after just one game, since it was matched up with the Elspeth deck from Duel Decks: Elspeth vs Kiora.

Turn after turn, Red stuck to its core fundamentals. Nothing flashy, just basic Magic, throwing a string of cheap creatures at its opponent like the Foundry Street Denizen and Goblin Roughrider. In both wins, Red managed to find its Shivan Dragon, and ride it to glory for the remaining bit of damage. That may be the Sample decks’ secret weapon: consistency. When you’re only 30 cards large, you know what to expect.

Having watched Elspeth falter in the qualifying rounds, it was only ever going to be up to Kiora to make a statement about their Duel Deck. Kiora had no easy feat of it either, facing off against the Khans of Tarkir Event Deck, Conquering Hordes.

Hordes is a fast-paced deck, designed to swarm and overwhelm in the early game with a stream of Warriors. If you could sum up the difficulties of the two decks in one card, it might be Kiora’s Surrakar Banisher. That may seem like an unusual choice, but the bounce ability of the Banisher was fairly weak against creatures that cost almost nothing to play, while the 3/3 body it left behind proved a challenge for the Warriors to get past. In the end, Hordes didn’t have the staying power to outlast the growing strength of Kiora, and she notched her first win.

Stampeding Hordes had a qualifying bye, and has not faced any test of its prowess yet- until now.

The Black Guide deck is yet untested. The Player’s Guide decks have a power level somewhere between Intro Packs and Event Decks. The deck boasts a trio of rares (Cruel Sadist; Ob Nixilis, Unshackled; Soul of Innistrad), and have solid consistency with 3-of’s and 4-of’s throughout (Mind Rot, Sign in Blood, Black Cat). It also has an appropriate land mix instead of the 25+ land content of the Intro Packs. Always bet on Black? This matchup’s for you.

Of course, the exploit-centered Cruel Plots might have something to say about that, having already taken down one opponent in the qualifying rounds, the Red/Black Infernal Intervention Intro Pack deck from Magic 2015. It was a narrow victory, however, with Cruel Plots falling in the opener to a Caustic Tar and poor creature array. The deck found its footing in the second game, exploiting a Youthful Scholar to feed a Rakshasa Gravecaller, then winning in the air with a Ruthless Deathfang. Infernal Intervention never saw more than four lands in the clincher, with Cruel Plots taking advantage of the stumble to field a pair of Deathfangs, and advanced easily.

The Fate Reforged Intro Packs went with a two-color model, following the three-color decks of Dragons of Tarkir. Surprise Attack is Green/Blue, running behind Thousand Winds and Temur War Shaman as the rares and centered around a morph and manifest strategy. It had a bye in the qualifying rounds, so arrives fresh to the scene.

Not so for Fate and Fury, the Clash Pack entrant for Magic 2015. A hybrid of the best parts of the Fate deck and Fury deck, the power level of the Clash Pack blended deck is supposed to be approximate to an Event Deck. Although it represents Magic 2015, Fate and Fury often runs like a Theros block constructed deck, with ramp-and-bash all-stars like the Voyaging Satyr, Courser of Kruphix, and Nykthos, Shrine to Nyx.

To get into the Championship, it had to get past another Commander 2014 deck, Built from Scratch. The mono-Red artifact-based deck almost put an end to the dream, twice nuking the board with Incite Rebellion and forcing the match to a Game Three. While Daretti, Scrap Savant’s forces looked poised for victory when it stuck a Hoard-Smelter Dragon, Fate and Fury stole it with a Hypnotic Siren and claimed the win with Daretti’s own minion. Poetic justice!

So who do you think will win?

Four matches means four points are up for grabs in the Prediction League. To participate, all you have to do is leave a comment below with your picks for the winners of the four matches:

Game One: Price of Glory vs Red Sample Deck

If you explain why you chose what you chose, you may end up being quoted in next week’s feature! Best of luck to all, and don’t forget the official deadline is 11:59pm this Friday night.

Read more from 2014-15 Season, Uncategorized
← Oath of the Gatewatch: Surge of Resistance Review (Part 2 of 2)
Murder: A History →
23 Comments Post a comment