Duels of the Planeswalkers 2012: Apex Predators Review (Part 2 of 2)

It’s a rumble in the jungle as Garruk faces off against Nissa! The Elf has a Green deck with a splash of Black removal, while as we’ve seen Garruk is packing a ton of fat beaters. Nature can be very cruel; which of these two Green planeswalkers has what it takes to survive as the fittest?

I’m on the play for the opener, and we both trade Forest drops. I then open my account with a Runeclaw Bear, while Sam raises with a Nissa’s Chosen. I then go for a Borderland Ranger, and Sam wins first blood by scoring a hit with the Chosen before adding a Sylvan Ranger, fetching her her third land drop.

Now turn 4, I counterattack for 4 then play Beast Hunt, netting a Garruk’s Companion and another Borderland Ranger (losing a Giant Growth to the graveyard). Sam lands an Imperious Perfect, letting her hammer in for 5 to drop me to 13. Next turn, I again counter for 4 to leave Sam at 12, then play a Grazing Gladehart. One Forest later, and thanks to the Gladehart’s landfall I’m up to 15. I then play a Garruk’s Companion and end the turn. Sam then slashes me to 10 with another Elvish attack, then adds a Nissa’s Chosen and Sylvan Ranger, the latter letting her find a Swamp.

A turn-6 Nature’s Lore triggers another landfall from the Gladehart, after which I summon the Borderland Ranger to get another Forest for the turn following. Sam’s relentless, however, sending in her Chosen and pair of Rangers for 7. I gang-block the Chosen with both my of Borderland Rangers to force a one-for-one trade, then she drops the bomb with a 6/6 Heedless One. My next-turn Runeclaw Bear is pathetic by comparison, and at the end of my turn Sam uses the Perfect to make an Elf token for good measure. She then attacks with the 7/7 Heedless One and pair of Rangers for 11. I’m forced to tri-block the One with my Ranger and Bears, tossing in a Giant Growth to ensure the One’s demise- though at the cost of two of my creatures. All the same, I’m down to 8 life and fading fast.

I get 2 of it back next turn from the Gladehart’s trigger on my land drop, but my turn is a blank. Sam makes another Elf token, then after adding an Elvish Visionary and Wildheart Invoker has enough on the board to swing for lethal.

Sam and I again trade early Forests, and I pull ahead with a Nature’s Lore while she deploys a Nissa’s Chosen. This time, though, I’m actually able to take advantage of ramping as a turn-3 Thrun, the Last Troll promise to keep Sam’s Elves in check. Back to Sam, she ads a Sylvan Ranger and Norwood Ranger, grabbing a Forest off the former after playing a Swamp on her own.

Now turn 4, I swing and connect with Thrun, then play another Nature’s Lore and Centaur Courser. For her part, Sam keeps cranking out Elves with a Norwood Ranger and Viridian Shaman. Back to me, I carve off another 4 points of damage with Thrun, then add a Cudgel Troll alongside. Naturally, Sam finds a Heedless One and plays it, halting my offensive. 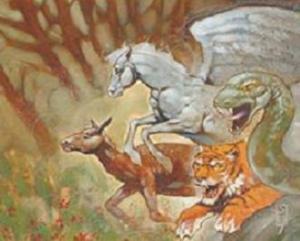 Now turn 6, I play a Runeclaw Bear and pass, while Sam drops still more Rangers with a Norwood and Sylvan tandem. When my next turn is a blank, Sam kills my Courser with an Essence Drain, going back up to 15 life. Turn 8, meanwhile, is a blank for the both of us.

I then summon a Borderland Ranger on turn 9, but when Sam finds an Imperious Perfect she alpha strikes me for 26. Although I survive the first wave thanks to my Trolls, a Giant Spider isn’t enough to keep me being plowed under with the next onrush of Elves.

Given how quickly Sam’s offense comes together, I’m actually a little relived that my first creature of the game is a Wall of Vines, after which I follow with a Grazing Gladehart. It’s a good, defensive start, but Sam opens with an Imperious Perfect. Back to me, I swing with the Gladehart for 2, knowing Sam won’t trade but dearly wishing she would. I then summon a Borderland Ranger, grabbing a Forest and playing it for 2 life. For her part, Sam finds a Viridian Shaman and Norwood Ranger.

Now turn 5, a Beast Hunt turns up a Cudgel Troll while sending an Overrun to the graveyard. Back to Sam, she swings for 5 with her Elves. I block the Ranger with my Wall, taking 3 to fall to 19 before seeing her double down with Nissa’s Chosen and another Norwood Ranger. I then summon the Cudgel Troll and pass. Sam swings in for 6 with her Chosen and Shaman, and I fall to 13. Then- guess what- a Heedless One.

My turn-7 Runeclaw Bear and Garruk’s Companion leave me tapped out, but I’m playing to my only out. If I can flood the board with threats, hang on for one more turn and draw a Forest, the Overrun still in my hand should see me through. Unfortunately, tapping out has left my Troll vulnerable, and Sam picks it off with an Eyeblight’s Ending before swinging with the team for 20 (leaving the Perfect at home). Land or no land, I’m done for, and I succumb to the sweep.

Before rendering too harsh a verdict on Garruk, it’s important to ask how much of this debacle was down to Garruk’s weakness, and how much was because of Nissa’s strength? There’s no denying the tribal Elvish deck- with four brutal Heedless Ones- packs an extraordinary wallop even on the strength of its creature base alone. Although Guardians of the Wood has access to Black removal, it’s worth noting that in the entire match she only killed two of my creatures with them.

So where did Garruk go wrong? Much of the answer to that can be found in the relationship between its top-of-curve cards and its mana suite. Unfortunately for fans of Green stompy, the Duels of the Planeswalkers platform doesn’t support mana dorks, so cards like Llanowar Elves were right out (though one is compelled to wonder about an Arbor Elf or four). Stompy relies on being able to play its fat creatures at the same time as its opponent is playing their midrange ones, essentially beating the opponent to the punch and delivering a knockout blow. Apex Predators has consistent mana, but it doesn’t have fast mana. Outside of the two Nature’s Lores, you’re not pulling ahead in the land count here- at best, you’re just hitting them a little more consistently than your opponent. Meanwhile, your hand is congested with a lot of fat, expensive cards that you can’t hope to play until later, limiting your options early on. Apex Predators sucks its own oxygen out of the room.

Without any access to direct removal, I was powerless in the face of essentially noncombatant cards like the Imperious Perfect. In a faster build, I’d simply run right over top of them. Here, Sam had plenty of time to build up her Elvish army, and a Heedless One was never far behind. Suffice it to say, though Nissa’s deck is a formidable opponent with a favourable matchup, Garruk doesn’t slip the noose for responsibility here. This one disappoints. Though the Garruk’s Packleaders were a novel touch for a “power matters” subtheme, there was a lot more that could have been done there to give the deck a distinctive flavour.

Hits: “Power matters” subtheme a nice touch, as is including both of Garruk’s signature creatures form Magic 2012; good mana consistency thanks to the Borderland Rangers and Nature’s Lores, and a Grazing Gladehart was a nice touch; two Overruns a delight

Misses: Lack of actual ramp really hinders what Garruk’s trying to do here; deck is too slow to effectively overwhelm