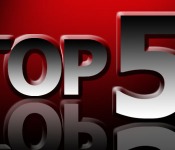 Welcome to the first installment of a new occasional feature on Ertai’s Lament! On The Top Five, we ask members of the Magic community what their five favourite preconstructed decks are, and why. We’re delighted to have as our inaugural guest James Arnold, known on twitter as @thatguyJames2. James has a regular feature on Gathering Magic, has his own site dedicated to his incredible design work, and was the creator of the delightful graphic we had for the Grand Final of the 2007-08 Preconstructed Championships.

Here is James’s Top Five- and matching banners he created just for this!

Hi there, my name is James Arnold. I’m a regular contributor to Gathering Magic in the form of infographics, design concepts, and other assorted graphic projects; I’m That Guy James.

When I first started playing MtG, I had hours of spare time to sit quietly on the floor with a pair of headphones and stacks of cards. Nowadays, I count myself among the fortunate who get to do what they love for a living. However, with all my commitments, I find myself with about 5 hours a week to spend focused on Magic the Gathering.

I also have a cavernous gap in my MtG experience, roughly the 12 years between the end of Urza’s Saga and the beginning of Return to Ravnica. That leaves me in the dark when it comes time to construct new decks that reach further back than Innistrad. With only 5 hours a week, I want most of those hours to be spent playing the game. I maintain a build for standard, modern, and commander, but I appreciate variety both in deck selection and construction.

I really value precons because of the depth of knowledge and experience that the designers bring to the table. What really creates value for me is when designers start pulling cards from years apart to create deep synergy and strong themes.

I’ve had a wonderful experience with many of these ‘Sunday afternoon’ decks, especially the lousy ones that just never seem to work right for me. Here are the top 5 decks that hold a special place in my precon library.

I remember the first time I heard about futureshifted cards. I was giddy with the idea of cards that had yet to find their place in their respective printing cycles. Many of my favorite narratives (Chrono Cross, Dr. Who, Primer, The Terminator…) involve the complexities of time travel. To integrate such an abstract idea into a physical product is nothing short of genius. It’s also great to see so many of the cards in a single deck rendered with the same ‘future’ interface design on the card. It gives it a uniquely cohesive look that you don’t get to see much anymore. Always a great escape from the norm, and always a great source of wonder when you consider how many of these cards have yet to have their future debut.

This one really hit it out of the park in terms of card cohesion. The graveyard mechanic is reinforced in every way possible, not only in mechanic interaction, but also with the amazing art selection, even the unique set symbol helps create a unified tone. This deck is a real pleasure, a classic theme that I’ve seen since the earliest days. There have been a ton of graveyard interaction decks through the years, including the surprisingly fun Golgari deck from the Duel Deck series, but Graveborn just does it better. It feels to me like everything that was a graveyard precon leading up to this point was preparation. This is the exhibit of mastery, the culmination of classic decks like Tombstone, Burial, Grave Danger, Golgari Deathcreep, and Beyond the Grave. There may be more effective decks out there (Junk Reanimator) )and there will certainly be more to experience in the future, but this effort serves as a wonderful landmark in the history of a cornerstone build.

This is one of those decks that really makes you pay attention. Though it was designed to go toe-to-toe with the Golgari, I love playing this deck in any situation, as it is well suited to a variety of approaches. When Izzet works, I feel accomplished; when it doesn’t, I have no one to blame but myself. This is a collection of cards that I personally wouldn’t have been able to come up with easily. I am impressed to no end by the depth of experience that drives the design of these builds. A largely singleton deck that manages a surprising level of consistency in its performance; this is a perfect example of why I buy precons.

This deck just might be perfect. It packs an amazing suite of cards, it’s 5 color, has multiple win conditions… and, most importantly, giant robots.

What really impresses me about this particular deck is the amazing level of synergy. With Dreams, I feel like there is a secondary game being played, one where I try and keep up with the deck. It’s my responsibility to keep track of what’s going on in terms of card interactions, assess the gamestate, and play the appropriate cards at the appropriate times. It’s a challenge that is typical of many control and infinite combo decks. However, when playing Metallic Dreams I never get that ‘dirty’ feeling that I usually get when playing a control deck. My opponent is still very much a part of the game, even when Dreams is fully fired up. In this way, I get a mental workout, my opponent gets a game, and there are giant robots. Everyone wins. 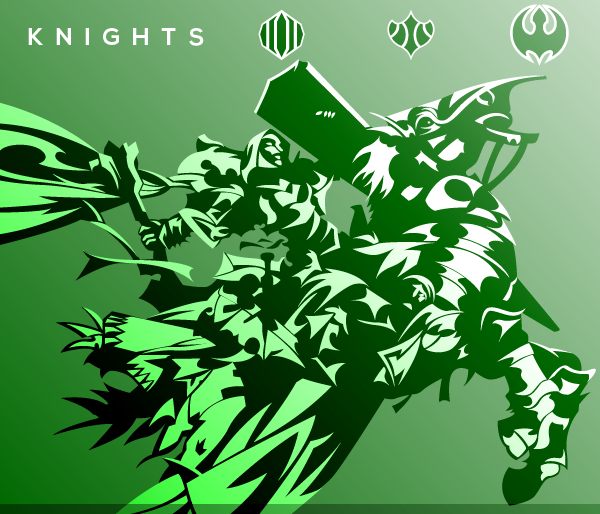 I’ll admit it; I am a knight fanatic.

My pride and joy as a collector is a binder that will one day contain a copy of every knight card ever printed in the history of the game. When I first learned about the Alara shards, I found out Bant was the shard of knights, and I’ve never looked back. Having missed the chance to buy them new, I rebuilt both Bant Precons from Alara. When Duel Decks: Knights vs. Dragons came out, I bought two.

These three decks to me represent the best of what knights have to offer from a variety of perspectives. They are highly synergistic, building critical mass in their own unique way before tearing across the board. Bant Exalted’s mechanic is perfectly suited to the image of the lone champion riding forth, ready to take on all the world has to offer. Bant on the March mixes things up just enough to keep them interesting and fresh without becoming alien. Meanwhile, the Duel Deck’s tribal synergy is top-notch, providing multiple avenues to turning a rag-tag group of weenies into a all-star smackdown.

Seeing the progression from ‘Exalted’ to ‘On the March’ to ‘Knights’ creates a really good sense of the history behind this tribe. For further reading, you can go even further back to Hope’s Crusaders from the Time Spiral expansion, the first precon I’ve found with a significant percentage of it’s creature being knights. These decks are far from perfect, but I never have as much fun playing the game as I do when I’ve got one of these in hand. Ultimately, that’s what makes these three decks my number 1 choice; the sheer joy of just playing the game with the cards you love.

That wraps up my list. It was great fun to think about which decks in my library really matter the most. Now that I’ve made this list, I’m even thinking about getting custom sleeves for my top 5, although I hear there’s a Heroes vs. Monsters Duel Deck coming out this fall…