Duels of the Planeswalkers (2009) Expansion Pack 3: Weapons of the Warrior Review (Part 2 of 2)

And here it is, the final playtest of the original Duels of the Planeswalkers from 2009. All seventeen decks have now been featured, and when we circle back to the digital realm we’ll begin looking at the next series. For now, though, I’ve got Sam to pass through as she gives Root of the Firemind a whirl!

I’m on the play for our opener, and lead with a Kitesail Apprentice, while Sam lays down a Mountain. Next turn I attack in with the Apprentice for 1, then follow with a Veteran Armorsmith. Sam, for her part, obliges with a Kiln Fiend.

Now turn 3, I swing in for 3. Likely fearing a combat trick, Sam declines the block and goes to 17. I then follow with a Kor Outfitter. I’m in good position, but once Sam takes her turn things go immediately South with the arrival of a Gelectrode. Knowing I’m in trouble, I turn the side sideways for 5, dropping her to 11. Back to Sam, she then uses the Gelectrode to ping my Armorsmith, using a Burst Lightning to finish the job. This untaps the Gelectrode, which can then pick off the Apprentice as well. She then attacks for 4 with the Fiend for good measure.

I Guard Duty the Fiend on turn 5, dearly wishing it was an Arrest for the Gelectrode instead. I then attack with the Outfitter for 2 and pass. For her next trick, Sam summons a Mnemonic Wall, letting her retrieve the spent Burst Lightning. Back to me, I play a second Kor Outfitter, and Sam pings me with the Gelectrode at the end of my turn. She then opens up the purse strings and taps out for a Sphinx of Magosi.

My turn 7 is a blank, though I do get pinged at the end of my turn from the accursed Gelectrode. Back to Sam, she triggers the Sphinx once, sending it in for 7 and cutting me in half. Drawing nothing, I scoop.

I begin our next game with an Elite Vanguard, attacking in for 2 next turn before playing a Valiant Guard and Kor Duelist. Sam continues to play land and pass. By turn 3, I’m hammering in for 3 more damage before adding a Kitesail. Sam? She plays a Gelectrode.

Defiant, I next summon a turn-4 Kor Hookmaster, tapping down the Gelectrode. I then attack for another 3, with the Valiant Guard valiantly sitting around and doing nothing. Sam goes down to 12, plays a Kiln Fiend, and passes. Back to me, I equip the Kitesail to my Kor Duelist, turning everything sideways for 6. Sam calmly casts Burst Lightning on my Duelist to kill it, which also untaps her Gelectrode. She then uses it to kill my Vanguard. It’s a trap! Only the Hookmaster is left of my attacking force, and Sam’s life total falls to 10. I equip the Kitesail to the Hookmaster and pass. For her part, Sam plays an Island and ends her turn.

Now turn 6, I attack for 3 with the flying Hookmaster. Sam pings me again with the Gelectrode, then uses a Lightning Bolt to kill the hapless Hookmaster, untapping Gelectrode. With nothing else to do, I equip the Kitesail to my Guard and pass. Sam pings me. 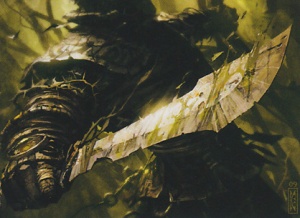 The next couple of turns are us trading nicks of our life totals, her through the Gelectrode and me through the Valiant Guard. Finally, on turn 8, Sam pings me then Shatters the Kitesail. She then attack in for 4, taking me to 11. Next turn I summon a Stoneforge Mystic, tutoring up a Trusty Machete which then gets equipped to the Guard. I attack in for 2 with it, taking Sam to 6. Again I get pinged at the end of turn. Back to Sam, she then pings me again, then Shatters the Machete. The emboldened Fiend comes across for 4, taking me to 11.

Now turn 10, I’ve got a rapidly-closing window of opportunity. I attack for 1 with the Stoneforge Mystic, taking Sam to 5. I then summon some decoys to draw some pinging fire, an Elite Vanguard and Loyal Sentry. Sam obligingly kills the Vanguard at the end of turn, then summons a Bladetusk Boar. Next turn, I play another Kor Hookmaster, locking down the hated Gelectrode. Of course, she pings in response, picking off the Loyal Sentry. I move to save it with Veteran’s Reflexes, but that just gets Dispelled, untapping the Gelectrode to ping me at the end of turn. Back to Sam, she attacks for 3 with the Boar, taking me down to 2.

Now turn 12, I attack with everything. Sam pings the Hookmaster, blocking with her Kiln Fiend to finish the job. That leaves the Guard and Mystic- not enough, but a kicked Bold Defense steals the win!

Sam opens with a Mountain, while I play an Elite Vanguard off a Plains. Back to Sam, she deploys a Kiln Fiend, while I score first blood with the Vanguard before adding a Trusty Machete and Valiant Guard.

Now turn 3, Sam plays- what else- a Gelectrode. I equip the Machete to my Vanguard and swing for 4, putting Sam at 14. Back to her, she adds a Bladetusk Boar and passes. I attack again with the Vanguard, which Sam blocks with the Kiln Fiend. She then finishes the Vanguard off with the Gelectrode. I replace my loss with the Makindi Griffin, hoping it can stay aloft long enough to pick up the Machete.

Now turn 5, Sam sends in the Boar for 3, taking me to 17. She then pings the Griffin for 1, hits it with Burst Lightning, and pings it again to kill it. Gutted, I equip the Machete to the Valiant Guard, then summon a Veteran Swordsmith. With my Guard properly kitted, I swing in for 3 with it to take Sam down to 11. Next turn, Sam simply repeats the ping/Burst Lightning trick that took care of the Griffin to kill my Guard. She then attacks with the Board for 3 more of her own, and I’m at 14. Back to me, I finally land a bomb in the form of a Captain of the Watch. She immediately brings a trio of 1/1 Soldier tokens with her, which get buffed to 2/2’s. This also buffs my Swordsmith, who strikes in for another 4 points of damage.

Sam’s turn 7 is a blank. I equip the Trusty Machete to a Soldier token, diversifying my threats. Facing an 18-power swing, Sam has little choice but to concede.

You wouldn’t think I’d be disappointed with a match that I took two out of three games in, but playing Weapons of the Warrior was an exercise in needless frustration. Sam’s deck certainly had a some tremendous advantage with the repeatable effect of the Gelectrode, and naturally I had to face off against it all three times. What was frustrating was the half-hearted way the deck went about its business.

A proper deck of this type should, roughly speaking, experience two surges. First, it should come off the starter’s blocks firing hard, using all of its mana on each of its early turns to flood the board with threats. Then it should find a second boost in the equipment it plays, letting its smaller creatures punch above their weight. Some builds may then opt for a third layer of attack, which is in the air. At all points, judicious removal should help keep the attack lanes clear of blockers, letting the smaller, more aggressive creatures prolong their usefulness.

The deck need a lot of focus to do this well, and several of its cards hit discordant notes. Perhaps the worst creature-based offender is the Valiant Guard, a card that’s all but worthless on its own. There are soem decks that need time to develop, and so are quite happy to play high-toughness creatures to stall the board- Simic Synthesis and Simic Domination spring to mind. Weapons of the Warrior is not one of these. Every early play is crucial to building up overwhelming advantage, and to have a card that can’t inflict any damage without being augmented in some way is not worth its place here.

Then there’s the Loyal Sentry, which has the distinction of not only being a glaring misfit in the deck, but one that uses up a rare slot to do so. This is a card that has almost no offensive applications, instead almost demanding you to leave it back until you find something worth blocking. In a similar vein to the Guard, the Makindi Griffin is also disappointing, Magic is filled with three-mana 2/2 fliers, and even a Skyhunter Cub here would be preferable. All of these serve to add ‘drag’ to a deck that needs to be sleek and lithe.

More unforgivable still is the removal package. A trio of Guard Duties? The whole point of removal in this kind of deck is to remove blockers, not create them. As we noted in the deck analysis, it’s difficult sometimes to assess whether a deck’s weakness is the product of poor design or good design. Something you have to have elements of ‘bad’ introduced into a deck for the sake of balance, and there’s a particular art in that. In the end, though, we have to default to the question of whether or not a deck is fun to play. In the case of Weapons of the Warrior, that’s a big negative. There’s just not enough good here to justify all that bad.

Misses: Deck at odds with itself, including defensive-minded cards in an aggressive archetype; the removal suite almost approaches the level of a cruel prank