Jimi and I are taking a break from sorting cards- and what better way to relax than to play? We’re ready to put Rebel’s Call through its paces, and to offer some opposition Jimi’s selected Disrupter. Can the Rebels work together to carry the day?

Jimi’s on the play for our opener, and she leads with a Swamp which I follow with a Mountain. Next turn she uses a Dark Ritual to establish herself behind a Wall of Distortion, while I simply lay down a Steadfast Guard.

Now turn 3, Jimi sets about pruning my hand for me, thanks to the Wall. I throw away a perfectly good Jhovall Rider, and, thus satisfied, she passes turn. Back to me, I attack for 2 with the Guard, then summon a Thermal Glider. That’s bad news for Jimi, as this deck has Gliders against both of her deck’s colours. Undaunted, she forces another discard off the Wall next turn, forcing me to get rid of my Ramosian Commander. She plays a Subterranean Hangar and ends her turn. I attack for 4 this time, sending in both bodies before adding a second Steadfast Guard.

Now turn 5 and down to 14 life, Jimi decides to use the Wall for defense and leaves my hand alone. She taps her Hangar to add a storage counter to it, then summons a Deepwood Ghoul. Over to me, I attack in with both Guards on the ground and the Glider in the sky for 6. Jimi blocks one of my Guards with her Ghoul, and I flash in Cho-Manno’s Blessing for a surprise protection from Black to make the trade one-sided. The other Guard is blocked by the Wall, but the Glider gets in for 2. Back to Jimi, she plays Gerrard’s Irregulars and swings in for 4, putting me to 16. I counterattack for another 6, which drops her to 8 after soaking up 2 points with the Wall. Summoning a Ramosian Sky Marshal, I then pass the turn back.

A turn-7 Larceny shows up too late to do much good, but it’s all Jimi’s got. I storm in for 9 with the team. One Guard runs into the Wall. The Irregulars trade for the other (with the Blessing). The 5 in the sky, though, she can do little about as she falls to 3. I replace my loss with a Nightwind Glider and end my turn. Drawing nothing, Jimi scoops.

After trading opening land drops, Jimi plucks a  Plains from my hand on turn 2 with a Specter’s Wail. She misses her third land drop, though, and I look to pull ahead when I land a Ramosian Captain.

Now turn 4, Jimi topdecks a Swamp and uses it to blast another of my Plains with a Rain of Tears. Back to me, I attack for 2 with the Captain, then add a Thermal Glider. Jimi kills the Captain next turn with a Maggot Therapy, but after drawing a new Plains and attacking with the Glider, I replace the Captain with a Ramosian Commander.

Jimi finds her first creature on turn 6, playing a Deepwood Ghoul. I attack for 4 with the Commander and Glider to put her at 12, then add a second Thermal Glider. Next turn, Jimi kills one with a Vendetta, then adds a Cackling Witch. Not breaking stride, I attack for 4 more to leave her at 7 life, then add a Jhovall Rider.

Now turn 8, things are looking grim for Jimi, as she passes after playing a Mountain. I Arrest her Witch to remove it from the combat equation, then attack in for 7 with everything. Jimi blocks the Commander with the Ghoul, going down to 2 life. Next turn, unable to extricate herself from the ring of creatures surrounding her, she concedes.

Jimi opens with a Swamp, while I deploy a Charm Peddler off of a Plains. Next turn she brings out the Molting Harpy, a questionable early play, while I add a Ramosian Sergeant.

Now turn 3, Jimi continues making payments on the Harpy, and sends it in on the attack after landing a Subterranean Hangar. Back to me, I nibble in for 1 with the Peddler and end my turn. Jimi lets the Harpy die on turn 4 during her upkeep, no longer willing to pay to keep it aloft. Instead, she uses the mana to summon Alley Grifters, then adds a storage counter to her Hangar. At the end of her turn, I trigger the Sergeant to tutor up a Lieutenant. I then play a Plains and pass. 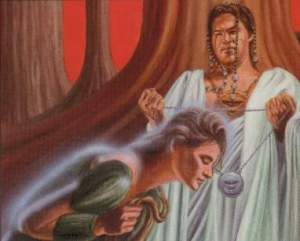 Jimi looks to hinder my progress on turn 5 with a Rain of Tears, smashing a Plains. I respond by using it one last time to help my Lieutenant grab a Nightwind Glider. Back to me, I attack with it in the air for 2, then summon a second Nightwind Glider. Jimi adds a storage counter to the Hangar at the end of my turn. Next turn, she summons a Deepwood Ghoul, then hits my hand with a Specter’s Wail to see off a Ramosian Sergeant. Back to me, I simply swing in for 4 with the Glider tandem, reducing her to 13 life.

Jimi attacks with her Grifters and Ghoul on turn 7, bringing my nearly level. She then kills my Lieutenant with a Maggot Therapy before ending her turn. As she passes I use my Sergeant to recruit a Steadfast Guard, which lets me attack next turn for 8. With Jimi wide open, I play a Ramosian Rally. That makes the damage tally 13, and takes the game.

This is the second match where the Rebels tribe has featured, as they were the villain in the upcoming playtest of Tidal Mastery. Largely because of the wide gulf in the opposing strategies, the deck had the chance to show off very different sides of its character. It made for an interesting contrast, and gave us a deeper respect of the deck’s capabilities.

Against Disrupter, it met aggression with aggression, swarming across the board with unrelenting attacks most every turn. Thanks to Jimi’s land destruction, it just wasn’t able to get off its core combo, chaining up Rebel after ever-more-expensive Rebel. Instead, it broke even on the ground and dominated in the air, whittling Jimi’s spindown die ever downward. In fairness, Jimi’s deck was perfectly disadvantaged by the Rebel Gliders and their protection from Black and protection from Red. They were difficult-to-answer threats once they took to the air, but even without the favourable matchup for colour Jimi couldn’t have answered them all. Rebel’s Call’s threat density offered another example of the old lyric “there’s more damn crows than there are damn bullets.”

Up against Tidal Mastery, the Rebels were given the luxury of time against a deck much slower to develop, and that suited them just fine. Jimi was able to hit her land drops, and run up the Rebel chain from Sergeant to Lieutenant to Captain to Commander to Sky Marshal. Tidal Mastery too didn’t have the tools to defeat such overwhelming odds, and folded quite ingloriously. As we can see, in both cases the Rebels were able to establish an early beachhead, then take over from there as battlefield circumstances dictated.

This ability to pivot between rush and buildup is entirely thanks to the Rebels’ distinctive mechanic, letting them fetch their fellows. When Wizards designed Mercadian Masques, they pitted two tribes against one another- the Rebels and the Mercenaries. Rebels could tutor for one mana more than their converted mana cost, Mercenaries for one less. Although positioned as counterbalancing one another, the playerbase quickly learned that one of these two tribes was substantially stronger than the other. Although we’ll cover the failings of the hapless Mercenaries when we return to the world of Mercadia for the decks of Nemesis, it’s worth pointing out the comparison as it favours the tribe tested today. The Rebels’ mechanic is a strong one, and it’s well-showcased by Rebel’s Call thanks to a very well-constructed core and some solid support.

Hits: Great framework of Rebels allows you to “chain” up Rebel after Rebel, limited only by your manabase; aggressive creature core lets you quickly attain numberical superiority, and evasive options give you some added dimension of attack

Misses: The creature removal suite is mediocre, consisting of two Arrests and an Afterlife; two Devout Witnesses and two Disenchants is a bit of overkill on artifact/enchantment removal, neither of which tend to be consistent threats in this environment