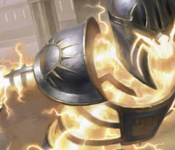 It’s our last look at Gatecrash today, for the next time we break out these decks it will be for the Preconstructed Championship later this year. Joining me at the table this time is Sam, who’s volunteered to give Thrive and Thrash another shot. Will she prove that the previous match was just a fluke, or will the Boros live up to the billing and rout the Simic?

I’m on the play to lead things off, opening with a Boros Guildgate. Sam plays a Forest. Next turn, I drop a Plains followed by a Lightning Mauler, while it’s Sam that gets first blood off of a second Forest and Strangleroot Geist.

Now turn 3, I summon a Firefist Striker, soulbonding it to my Mauler. That gives the Striker haste, and I turn both sideways for 4. I then add a Boros Elite and pass. Back to Sam, she plays a Simic Guildgate, then attacks for 2 with the Geist to put me to 16. After Farseeking up an Island, she ends her turn. Next turn I attack in with the trio of beaters for 7, with battalion kicking in to inflate the Elite. A Gather the Townsfolk gives me two more creatures, 1/1 Humans, and I pass. Sam blows up my Guildgate with an Acidic Slime.

It’s just enough of a defense to buy her a turn- except I Pillar of Flame the Slime away. That leaves Sam open for lethal as the Striker’s battalion takes the Geist out of the blocking equation, and the first game goes to me.

Sam begins the rematch with an Arbor Elf off an opening Forest, while I simply deploy a Boros Guildgate. Next turn she uses the Elf to ramp into an early Borderland Ranger. After dropping a Plains, I tap out for a pair of Boros Elites. Sensing a momentary opening, Sam attacks with the Elf and Ranger  for 3, dropping me to 17. She then summons another Borderland Ranger, fetching up another land to hand. Back to me, I tap out for a Skyknight Legionnaire, whose haste lets me attack with battalion straightaway. The attack catches Sam full on the broadsides, dropping her in a stroke to 12.

Now turn 4, Sam sends a Ranger in for 2 before Bramblecrushing away my Guildgate. Drawing a Plains, I don’t miss a beat, parlaying it straight into a Silverblade Paladin which soulbonds with my Legionnaire to give both double strike. I attack in with the Legionnaire and pair of Elites, and Sam gang-blocks one of the Elites with a Ranger and Elf for a tree-way trade. That keeps her out of burn range, but she’s still down to 5.

A turn-5 Thragtusk gives her some breathing room, though, as it puts her back up to 10 life and gives her some defensive muscle. This forces me to attack only with the Legionnaire, but thanks to double strike this chunks Sam down to 6. She then tries to apply some pressure by attacking with the Thragtusk for 5, putting me to 10. An Acidic Slime replaces it on the back-end, and she looks to destroy my last remaining source of Red mana. I tap it in response, fueling a Boros Charm for 4. With my Legionnaire poised to deliver the coup de gras, it draws a snap concession.

Anxious to avoid the sweep, Sam again leads with an opening Arbor Elf, while I counter with the Guildgate. A Strangleroot Geist follows next turn after she adds an Island, nicking in for 2. For my part, I again set myself up with a pair of Boros Elites- an ominous sight.

Sam drops a Simic Guildgate on turn 3, then attacks for 2 with her Ranger to put me to 16 before playing another one (fetching her Mountain). A Skyknight Legionnaire again gives me an immediate battalion strike, smashing Sam for 8. Next turn she wisely decides to hold her creatures back, instead simply playing a Farseek for an Island and passing. A Pillar of Flame sees out the Geist threat after I play a Slayers’ Stronghold, neutering its undying by removing it from the game entirely. I attack for another 8 thanks to battalion, and Sam trades an Elf and Ranger for a Boros Elite, going down to 7. I simply summon a replacement model, and pass the turn.

A turn-5 Deadeye Navigator gives Sam some muscle, but it takes a moment to realise that I’ve got lethal on the board thanks to the Stronghold.

One of the worries I have when reviewing decks is that a deck will pull a Jeckyll-and-Hyde, reinventing itself entirely between its turn as foil and its turn as the subject of a playtest. No preconstructed deck is immaculately tuned for maximum consistency, some much less so than others, and it would be unfortunate to give a deck a grade only to find that when my opponent is playing it it posts dramatically different results.

This is more anxiety than anything else; by now we’d like to think we’ve become fairly skilled at what to expect from a deck, and between analysis and playtesting we’re usually in the ballpark of what a deck’s capable of if you were to play it another fifty or a hundred times. Still, it’s always especially gratifying when a a deck lines up equally well in both roles, and that was certainly the case here. Including the pregame friendly, the Boros went three-for-four in our playtest of Thrive and Thrash, and today’s game was a virtual mirror image. If anything, Rally and Rout actually did a little better this time around, winning a turn or so quicker on average. The deck really is that explosive.

It’s hard to find much fault with the deck that doesn’t sound overly nitpicky, since it does a single thing (weenie rush), and does it exceptionally well. The deck’s mana curve is aggressively-costed, and there’s little difficulty in deploying a rapid stream of threats that can overwhelm your opponent quite quickly. There’s a fair amount of removal, though I’d probably have been a little happier with extra burn instead of Gather the Townsfolk, which seemed like over-insurance for an unlikely contingency. Certainly there’s plenty more in the sideboard, so there is that.

Champion of the Parish

With all this Boros love, where then are the deck’s flaws? For one thing, I never liked playing Boros Guildgates. Though I was able to recover well thanks to double-drops of the Boros Elite each time, you won’t always be so fortunate. In a deck like this every turn has to count, and dropping a land then shipping the turn feels like a missed opportunity. Although there’s never a perfect solution, and Wizards has to work within certain constraints, I’d have happily swapped out Thalia, Guardian of Thraben’s rare slot for another Clifftop Retreat, then replaced the creature hole with a Skyknight Legionnaire. The real answer, of course, is to simply replace the Guildgates with what they dream of being- Sacred Foundries– but that’s beyond our remit for the purposes of reviewing the stock deck.

Another thing I noted with the deck was that it felt a little inconsistent, thanks in part to a number of different singletons. Sure a turn-1 Champion of the Parish is superb, but it gets less attractive as the game goes on. The Silverblade Paladin and Ash Zealot too seemed a bit situational. The Paladin in particular is superb if you’ve got a Skyknight in play, but somewhat less impressive in a deck loaded with ground troops that tend to be on the smaller side. Again I also could have happily cut two Gather the Townsfolks for two more Boros Charms. Not in any way to compare, but I couldn’t shake the feeling that the Boros meddling I did for Gathering Magic had some elements to it that worked better than Rally and Rout. Your mileage, of course, may vary.

Misses: Rare selection a touch hit or miss; Guildgates a turn too slow for what this deck needs to excel