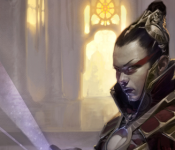 The next time we look at a Gatecrash precon, it’s going to be an Event Deck- our review series of the Intro Pack decks draws to a close with our playtest of the much-anticipated Orzhov Oppression. We were much impressed with the execution of the bleeder strategy from the original block. Will the updated version equally impress? To find out, Sam sat down with Simic Synthesis.

Sam’s on the play for our lead-off game, and we trade land drops for the first two turns. A Basilica Screecher opens my account on that second turn, while Sam’s still developing with a Forest on turn 3. I trigger my first extort of the day off of a Silvercoat Lion, then attack in with the Screecher for 1.

Sam begins the stabilisation process with a turn-4 Crowned Ceratok. I play Basilica Guards, extorting off the Bat, then attack for another to leave Sam at 16 and me at 22. Next turn, Sam fills her hand up with an Urban Evolution, playing two Islands on the turn. I add a Plains but have no other play, instead content to nick in with the Bat for 1.

Now turn 6, Sam plays a Simic Keyrune and passes- it’s been a poor start for her. I add a Syndicate Enforcer, extorting twice off the Screecher and Guards. I then attack for 1 more in the air, and at the end of my turn Sam flashes in a Shambleshark. It’s now a 12-24 game. Back to Sam, she then adds an Adaptive Snapjaw, evolving her Shambleshark into a  3/2. She passes, after which I summon a Kingpin’s Pet. This lets me extort three more times, a painful swing of 6 life. I then attack with the Bat for another point, and Sam’s down to 8.

A turn-8 Encrust solves the Pet, but Sam’s got little else, clearly hoping to try and evolve the Snapjaw before sending it at me. I play a Knight of Obligation, extorting three more times. I’m now at 30 life, well ahead of Sam who’s circling the drain on 4 after my Bat flaps across the red zone. Next turn, though, Sam nearly checkmates me. A Sleep shuts down my defenses, letting Sam animate her Keyrune and send everything against me unopposed. At a stroke I’m cut fully in half, down to 15, and facing a very surprise upset. Sam adds another Keyrune for insurance and passes the turn.

Fortunately, the upset is not to be. With Sam nearly dead, all I need to do is play a Basilica Screecher. Though it might not stop enough incoming damage to save me, it doesn’t need to. I extort off of it four times, defeating Sam.

Again we swap land drops for the first two turns, and again I open the game with a second-turn Basilica Screecher. This time, though, Sam’s got an early play in the form of a Shambleshark, which she flashes in on the end of my turn. 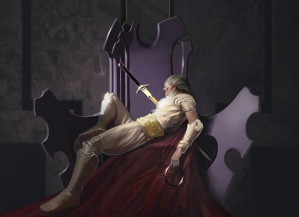 Then, on turn 3, she evolves it when she summons a Crocanura. She turns the Shambleshark sideways, and first blood is hers as I go down to 17. With the air lane sufficiently clogged, all I can do is use the Screecher to extort off my Vizkopa Guildmage and end the turn. Back to Sam, she attacks for 3 more before adding a Keyrune to the board. I summon a Kingpin’s Pet, extorting once. At the end of the turn, I’m at 16, with Sam at 18. Extort is keeping it close.

A turn-5 Adaptive Snapjaw, however, threatens to let Sam run away with it. Both her other creatures evolve, gaining +1/+1 counters. She plays it safe by holding the Crocanura back, knowing the air is her greatest vulnerability in the red zone against me. The Shambleshark, however, happily carves in for 4 to leave me at 12. Back to me, I shut down the Snapjaw with One Thousand Lashes and end my turn. Next turn, Sam loses 1 life off the bleeder enchantment, but happily evolves her side with a Leyline Phantom. She attacks with the Shambleshark for 5, leaving me at 8. I claw back 2 of those points when I double-extort off of a Basilica Screecher, but I’m in serious trouble.

Now turn 7, Sam swings for 10 with her Shambleshark and Phantom. I chump the former with a Screecher, and the Phantom returns to Sam’s hand. With me at 5 life, she then opts to try her luck at Unexpected Results, but all she gets is a Forest. Still, the spell returns to her hand for another go later. As for me, I stick a Dying Wish on my doomed Guildmage, extorting twice off of it. Back to Sam, she resummons the Phantom for another round of evolves, then attacks for 6 with the Shambleshark. I shove the Guildmage in front of it, plugging my ears so I don’t have to listen to his undignified dying screams. The aura on him triggers with his passing, and by the end of the turn I’m actually ahead by a point with Sam down to 8 life. Over to me, I summon a Knight of Obligation, extorting two more times to go up to 11. With Sam at 6, it’s a race to the finish.

Now turn 9, Sam attacks for 15 with her Shambleshark, Phantom, and Crocanura, looking to put me down while she still can. I chump with the Screecher alone, knowing I’m taking a risk but unable to sacrifice any more of my extort options. The Crocanura and Phantom slam into me for 9, leaving me at 2, and at the end of the turn Sam flashes in Merfolk of the Depths. Luck is with me, though, as I draw a Gift of Orzhova. I play it onto my Knight of Obligation, extorting twice to put Sam at 3. With her wide open in the air, the Knight then turns sideways for the win. A close one!

Sam begins the final match with a Forest, while I land a Tormented Soul off of a Swamp. Next turn she brings out another Forest, passing the turn, while I attack in for 1 after a land drop of my own.

Now turn 5, Sam attacks with her Krasis and Crocanura for 5, dropping me to 12. I counterrattack with the Soul, then shore up my defense with Basilica Guards, extorting for 1 to put Sam at 15. Next turn, Sam attacks for 3 with the Krasis in the air, and I’m down to 10 life. The Crocanura evolves again when she follows up with an Adaptive Snapjaw. Back to me, I exile the Snapjaw with an Angelic Edict, extorting twice. After an attack with the Soul, Sam and I are level at 12.

Now turn 7, Sam attacks for 6 with the Crocanura and Krasis. The problem when you don’t bluff enough, though, is that you make it fairly obvious when you’re not. Having kept the Crocanura at home once my Guards touched down, Sam now decides to commit it on the attack. Smelling a trap, I let it pass. When Sam flashes in Merfolk of the Depths, evolving the Crocanura to a 4/6, my caution proves true. Still, that’s a lot of damage to take on the chin, and I end the turn at 5 life. Back to me, I counterattack with the Tormented Soul, then extort twice when I summon more Basilica Guards. Sam’s now down to 9, with me at 7- another close game.

Not close enough, sadly. Sam’s next-turn Sapphire Drake lets her Crocanura take to the air alongside the Krasis, and I can do nothing to stop it.

When starting out to review a set, Jimi or Sam typically pick whatever deck they feel like playing against the deck of the moment. In the beginning, the choices are fairly wide-open subject to a few minor guidelines, as we try to avoid ‘bounce matches’ where the same two decks play one another twice, and each deck gets one turn as feature and one turn as opposition. It also means that towards the end, the choices start to become predetermined. Sam had no choice but to pilot Simic against the Orzhov (they were the last one left), and it turned out to be a very fortuitous development. As it happened, this was a very illustrative matchup.

Despite the obvious surface differences in both mechanics and strategy, these were both decks that really wanted to hit their stride early and curve out along the deck’s natural trajectory. Put another way, this means playing a creature every turn that advances the deck’s aims above and beyond just being another body. We’ve seen this sort of effect before, most recently with our look at Duel Decks: Izzet vs Golgari’s Golgari deck, and then we likened the experience to hitting “zip strips” playing the classic NES racing game RC Pro Am. Miss the strips and you’ll still drive along just fine, but hit them and you’d surge ahead. 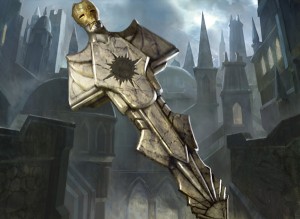 In that sense, the Orzhov vs Simic battle boiled down to who could hit more of their targets in turn, and sadly for the Simic their deck just wasn’t tuned to do that as effectively. Part of this is down to simplicity- whereas the Orzhov are plotted along a single axis (mana cost), the Simic’s mechanic is plotted along two (mana cost and power/toughness). Both decks had the opportunity to pull ahead, but the Simic had more opportunities to fail. That’s not a clean bill of health for the Orzhov, as we saw Boros Battalion run the rule over them earlier in our reviews.

Our impression of the guild’s first deck, Code of the Orzhov, was something of a mixed bag. We wholeheartedly approved of the ‘bleeder’ strategy the guild promoted, as it’s one of the least-common deck archetypes to have featured in a precon in large part to just how specialised it is. Less enjoyable was a rather inconsistent sacrifice subtheme which diluted some of the efficacy of the deck. Orzhov Oppression is everything Code of the Orzhov wanted to be and more, and the deck gets full marks for execution. Extort is a superb mechanic, simple in its conception, fitting and flavourful for the guild, and surprisingly fun to play. Not everyone is going to enjoy this style of play, and certainly there’s room for improvement (particularly with removal), but Orzhov Oppression was a lot of fun.

Hits: Extort is a great mechanic here, and well-supported by card choices and strategic alignment; in a set whose decks have been marked by inconsistent quality at the rare slots, both cards here are excellent choices

Misses: Deck’s mana curve a little too high to get the most from the extort mechanic; removal- as has been so often the case- is inconsistent and conditional