It’s our opening tilt for Gatecrash, and we’re excited to begin tearing into the set’s precons. Joining me at the table is the lovely Jimi, and she’s selected a deck close to her own heart. Can Boros Battalion impose order onto the chaotic battlefield, or will it fall prey to Orzhov Oppression?

Jimi’s on the play for our Gatecrash opener, and begins with a Plains. I do as well, then use mine to bring out a Boros Elite. Back to Jimi, she fields a Basilica Screecher after adding a Swamp, while I counter with a Daring Skyjek.

Now turn 3, Jimi plays a land and passes, while I recruit a Warmind Infantry to the cause. Back to Jimi, she again develops the manabase, but has little else to do. With three creatures up, I send them all into the red zone, triggering battalion. My Boros Elite becomes a 3/3, the Infantry a 4/3, and the Skyjek gains flying. Jimi trades her Screecher for my Skyjek, going down to 13 life from the other two hammering home. I then replace the loss with a Canyon Minotaur and end the turn.

A turn-5 Angelic Edict exiles my Infantry, but with no defenses up Jimi’s an easy target for another 4-point swing. I then play a Bomber Corps to go back up to the critical three creature level, and follow with a Boros Keyrune for good measure. Next turn, Jimi summons a Treasury Thrull which explodes when my answering Foundry Champion touches down and throws fire its way. That clears a path for my beaters which take full advantage, rumbling in with battalion on. The Bomber Corps sends its point of damage across the table, and when the dust settles Jimi’s clinging on at 1 life. Unsurprisingly, she concedes after the next draw.

Again we trade opening land drops, and again I open my account with a Boros Elite. This time, however, Jimi’s found her High Priest of Penance, and deploys him immediately. I attack past it with the Elite, then follow with Bomber Corps. For Jimi’s part, she follows with a Silvercoat Lion, while I drop a Boros Keyrune. Thus far, it’s more or less detente. 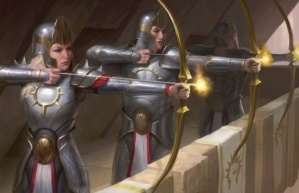 Now turn 4, Jimi turns her Lion sideways for 2, then summons a Tormented Soul. I activate my Keyrune, then attack with all three creatures, pinging her Tormented Soul with the Corps. Jimi chumps the Keyrune with her High Priest, then uses its death trigger to take my Boros Elite with it. She then adds some perimeter security with a Blood Reckoning, while I look to rebuild with a Fortress Cyclops.

Now turn 6, Jimi adds a creature of her own, a Kingpin’s Pet. I pick it off with a Mugging, then attack in for 6 with the Cyclops to drop Jimi to 9 (losing a life from the Reckoning in the process). I then add another Boros Keyrune followed by Wojek Halberdiers and pass. Jimi summons a second Silvercoat Lion, then enchants it with a Dying Wish and braces for impact. I open my turn with a Warclamp Mastiff, upping my creature count for the Foundry Champion that follows. Jimi is rocked by the Lava Axe the Champion sends her way, then sees my army pour through the red zone. With battalion active, my Bomber Corps pings Jimi for 1. Jimi chumps the Cyclops with her Lion, triggering its Wish, while blocking my Halberdiers with the other one. When the fog of war lifts, Jimi’s at 4 life, but it will take a miracle to avoid falling to my army next turn. She doesn’t draw it, and scoops.

This time, Jimi finds a one-drop right off the bat, leading with a Tormented Soul. Next turn she scores first blood with it, adding along a Basilica Screecher while I kick things off with a Bomber Corps.

Now turn 3, Jimi attacks for 2 and passes, setting off a back-and-forth over the next few turns as we swap damage. Although Jimi clearly is getting the better of me, inflicting two for my every one, things take a dive for her on turn 5 when I then summon a Firemane Avenger.

Jimi looks to strengthen her position with a turn-6 Basilica Guards, triggering extort off the Screecher to syphon a point of life from me. Although the Screecher is grounded, the unbloackable Soul walks right past to put me down to 11. Back to me, I ambush Jimi with battalion after playing a Skyknight Legionnaire and swinging with the team. The Avenger’s battalion trigger is a free Lightning Helix, and I blast the Screecher with it. Compounding the problem for Jimi is my Bomber Corps, which pings away her Tormented Soul. It’s a backbreaking turn of play, and the attack itself leaves her at 13 life.

A turn-7 Kingpin’s Pet allows Jimi to extort off the Guards for another point, but it’s all she’s got. I again send in my trio of beaters, killng her Pet with my Angel’s Helix. Jimi’s cut in half to 7, and once more finds herself unable to do much about it. After the next draw, she quietly puts her hand on the table and begins collecting her cards.

Holy smokes! This was a decisive win for our Boros friends, and Jimi’s Orzhov were left in a bloody heap. It’s worth noting that I won the pregame friendly as well, though Jimi’s deck did much better in that engagement- I won at 3 life. It’s worth noting that one of Jimi’s more effective spells against this deck- Blood Reckoning- still was nowhere near fast enough to race. Although extort is a fine mechanic, it too was not able to help her keep pace. Boros Battalion is simply able to bring a ton of pressure to bear, and once it gets rolling with battalion its momentun can be difficult to stop. 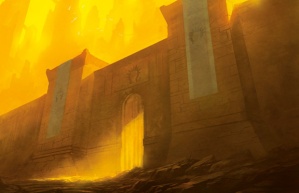 This is doubly so in the case of its evasive offerings. Ground-based mass attacks were bad enough, but Jimi didn’t stand a chance in game three against my Firemane Angel and pair of Skyknight Legionnaires. This gives the deck an extra level of lethality, and a hedge against its biggest weakness- the need to attack to be effective. Many of the deck’s creatures aren’t all that impressive until they are activated, giving the deck something of the “feast and famine” dynamic we see so much of in the game (where a card in its natural state is underpowered, but becomes superpowered under the right conditions). Boros Battalion is squarely one of those decks.

To be sure, Orzhov Oppression flattered the Boros, but there are decks that would give the Boros a run for their money. Any deck that could vie for control of the red zone would certainly be able to hold its own, preventing the Boros from profitably attacking. A decent removal suite too could keep the blistering power of the Boros in check by keeping them below that critical threshold of three viable attackers. One wonders if the guild would have quite the easy walk of it against the Gruul, for instance. Thanks to the number of creatures with flying, the Boros can still manage to threaten even in those sorts of confrontations.

Additionally, the deck’s removal suite is fairly poor. Arrows of Justice compares quite poorly to Searing Spear, as the relevance of that added point of damage pales beside the flexibility of direct burn- not least because you don’t lose an attack in the process. It’s clear that this was a balancing act, as the deck’s creature complement is very strong. It’s also one of the first things you’ll want to look at when tinkering with the deck.

Overall this is a very strong construction. It was difficult to assess the impact of the plumped-up manabase in so small a sample, but it’s looking like something of a trade-off. It’s nice to be able to hit my bombs more reliably, but I wouldn’t have wanted to be in Jimi’s shoes on this one, taking a beating and needing an answer, only to draw a land.

Hits: Strong creature component capable of bringing tremendous pressure to bear; battalion is a fun mechanic that rewards you for what you’d already want to be doing in a Red/White deck

Misses: Removal suite is suboptimal; deck can falter if it meets its match in the red zone, as its creatures are somewhat less efficient when not optimised through the guild’s signature mechanic