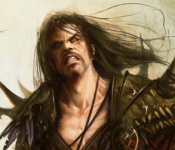 We’ve now come to the end of the month of December, and our voyage through Duels of the Planeswalkers is coming to a close. And while I would under most any other circumstance hesitate to quote the song ‘Closing Time’ by Semisonic, it seems quite appropriate as we prepare to turn the page on a new year at Ertai’s Lament to do precisely that. Indeed this new beginning of 2013, and the declaration of a new theme year, comes from some other beginning’s end.

As we’ve talked about over the previous month though the different decks of the initial 2009 offering of Duels of the Planeswalkers, this product was the crowing glory in Wizards’ attempt to find the right entry-level product for Magic: the Gathering. A game of growing complexity with each set seeing an influx of new cards, mechanics, interactions, and rules, they had tried and failed a number of times in the past to strike that right balance between approachability and that essence which makes Magic, well… Magic. In the end, it took a turn towards the video game industry to accomplish this, and the result has been a tremendous success.

In 2012, we declared that our theme for the year was going to be the “Year of Firsts.” We had a lot of fun looking at each set from the perspective of what it aimed for and accomplished that set itself apart from the rest of the game. We opened with the first “colour matters” set in Invasion after crossing the yearly threshold with the first fully integrated block-structured set of Tempest. We perhaps bit off a touch more than we could chew by doubling up on “firsts” for Project Mirage Block, the first all-digital preconstructed decks and our first (and indisputably last) full-block review (a burnout from which some of us have yet to fully recover from). Lorwyn gave us a look at the first break from the traditional three-set block structure since it had been introduced, and we even dipped into Urza’s Saga- the first time R&D had been pulled as a whole into the VP’s office and read the riot act over a Magic release. And through it all, we’ve continued to keep abreast of ever new release, from Innistrad to Avacyn Restored, Magic 2013, and all the rest.

Now we’ve arrived at 2013, and it’s time to change gears. For this year, we’re going back to basics, and will be looking at the game through the lens of Duels of the Planeswalkers. We’ve assembled every deck in paper form, from the original eight right on through to Grim Procession and Berserker Rage, the latest two decks announced just a few short weeks ago. One of the things we’re most looking forward to observing is how the series has changed and evolved over time. The game has come a long way since these first eight dcks, as you can see from the two aforementioned offerings. The decks at the beginning were designed in a void, intended to illustrate the fundamentals of what each colour was about, and what was possible when you began mixing them together. Of course, without growing form there you’re releasing the same decks year after year, so watching how, say, Red has been definied release to release will be particularly intriguing, as will the illustration of different facets and strategies of the game. Like all precons, each deck has its own story to tell, a tale of both what the deck wants to do as well as where it fits in the grand tapestry of the game. We’re excited to begin the journey!

Of course, that doesn’t mean that all you’ll get here for all of 2013 is Duels of the Planeswalker decks followed by more Duels of the Planeswalker decks. This will be the kind of theme that if we didn’t call it out explicitly at the outset it might take awhile to notice, since we’ll continue to review every new precon that comes our way. In addition, we’ll be mixing in trips to other sets and decks completely unrelated to Duels. It will be not unlike a top single on the pop radio station. You won’t hear it five times in an hour, but if you listen the whole day you’ll hear it more than some others. Duels of the Planeswalkers has a lot to show us about Magic, and the success of the line tells us that it’s here to stay.

On that note, we next turn our attention to the last of the original eight Duels of the Planeswalker decks, Scales of Fury, a ‘violent assault on almost all fronts.’

Violent assault or otherwise, Scales of Fury is a case study in the concept of ‘value,’ with a number of cards in its arsenal that provide card advantage- virtual or otherwise. It begins with a playset of Plague Beetles, 1/1 swampwalkers that give it a dose of early presence and some reach against a Black-playing opponent. It’s the exception rather than the norm, however, as the absence of two-drops indicates a deck that’s quite comfortable letting itself develop early rather than flood the board with threats.

Another playset of cards await us as the three-drop slot with a squad of Civic Wayfinders. As we noted with Teeth of the Predator, this isn’t ramp so much as mana smoothing, helping you make sure you hit your mana curve as you develop into the midgame and beyond. As we’ll soon see, there’s another creature in the deck who also cares about land types, letting your Wayfinders add a bit more fuel to the fire even if you don’t otherwise have a burning need for extra land.

The other three-drop here is a trio of Sprouting Thrinaxes. A three-mana 3/3 would be just fine for Green, but adding in a couple of other colours into a somewhat constraining mana cost does offer an added benefit, with the Thrinax replacing itself with a trio of 1/1 Saprolings when it dies. This is tremendous virtual advantage, giving you essentially four bodies in one card (even if you don’t get them all at the same time). Cards like this (as well as the recent undying mechanic from Dark Ascension) also have an added bonus- they make your opponent’s removal weaker. Sure a Lightning Bolt is going to kill your Thrinax just as sure as it would kill a Trained Armodon, but unlike the Armodon you’ve still got 3 power left behind on the board. Against the Armodon, that’s a one-for-one swap, but with value creatures like the Thrinax their one removal card is worth considerably less.

Perhaps surprisingly for the Dragon-loving Sarkhan Vol, this deck doesn’t close with a massive, scaly aerial threat. Indeed, the deck’s top closer is a ‘mere’ 2/2 in the form of the Furnace Whelp. This is where cards like the Civic Wayfinder and Rampant Growth come in handy, however. With a full playset of Whelps on offer, you’ll benefit greatly from a steady influx of Mountains over the course of the game. Being able to convert Red mana into damage can greatly hasten the end of the game in your favour, making this a must-answer card for your opponent. And should they be able to, well, you’ve always got a pair of Gravediggers to fall back on to retrieve the fallen Whelp.

The Odor of Smoldering Brain

With a number of 3- and 4-of’s, Scales of Fury is laudably consistent. Indeed, there’s very little fluff in here whatsoever, though of course some cards tend to be better than others. First off we find a solid removal suite, consisting of a trio of Terrors as well as a pair of Incinerates. This isn’t enough to let you throw it about freely, but the deck can be quite clinical against its opposition. And should your opponent be running enchantment- or artifact-based threats, you have a pair of Naturalizes. 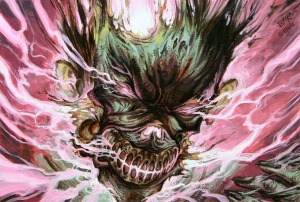 This deck also packs in a rare card in the form of a Violent Ultimatum. With the ability to destroy three permanents regardless of type, it’s a brutal hammer-blow on your opponent and can be used in all manner of ways. If there’s a creature stall you can use it to break through, while if they happen to be stuck a bit on land (or if they’re playing a multicolour deck), you can smash their manabase. Of course, the mana cost is extreme, but as a one-of in the deck it’s the perfect inclusion.

To help you get there, you have the aofrementioned Civic Wayfinders as well as a playset of Rampant Growths. With no creatures to play on turn 2, this is the card you’ll most want to see for that critical second turn development.

Another way to pull ahead is to trip your opponent up, and towards that end we find a pair of Blightnings. One of the staple cards of the classic Jund deck of its day, this card two-for-ones your opponent if they have cards in hand, and delivers some extra damage in the bargain. It’s novel to compare this to Mind Rot to see what the difference in mana cost is worth.

Finally, there’s another playset of cards here with the deck’s final offering, Dragon Fodder. Another value card of sorts, this offers a pair of bodies for two mana and one card. Curiously, this deck offers little way to take advantage of these- there aren’t any Overrun-style effects, nor are there any Dragons in the unlockable list (the cards you win by playing the deck in Duels of the Planeswalkers) that have devour. Still, a swarm of small bodies presents a threat all its own, and should you need to trade for time they can always jump in the path of an onrushing beater.

That’s it for the final deck of this first Duels of the Planeswalkers installment. We’ll return in two days to report on its playtesting, and offer a final grade.