It’s Elspeth’s turn in the arena, and opposing her this time is Nissa Revane. Joining me at the table is Sam, who’s been eager for a turn at the Black/Green Ears of the Elves. Can Wings of Light rise above?

On the play, I open with a Suntail Hawk, while Sam lays down a Forest. Next turn I play a pair of Goldenglow Moths after attacking for a point. Off to a slow start, Sam plays a Swamp and ends her turn.

Now turn 3, my deck kicks into high gear with the arrival of a Glorious Anthem, enabling a 4-point swing in the sky. Back to Sam, she finds her first creature with an Elvish Champion. I attack in again for another 4 to leave her at 11, then add a Venerable Monk to go up to 22. Sam’s turn 4 is a blank.

I Pacify the Champion on turn 5, then turn all of my creatures sideways. Down to 7, Sam then adds an Elvish Warrior, but it’s too little, too late. An Angelic Blessing on the Monk valuts it right past Sam’s defense, and her deck folds after a spectacularly underwhelming performance.

A much better start awaits her on the rematch, as she leads with an Elvish Eulogist. I play a Plains and pass, leaving Sam free to score first blood on turn 2. I shore up the defensive vulnerability, however, when I summon a Youthful Knight. That stalls Sam, who responds with another Forest and passes. I add a Glorious Anthem, and the newly-buffed Knight gets sent in for 3.

Now turn 4, Sam counterattacks with the Eulogist for an opportunistic point, then adds an Elvish Warrior. I drop her to 14 with another carving from the Knight, then add a Venerable Monk to reset my life counter to 20. Back to Sam, she sends the Warrior over for a 2-point visit, then summons Elven Riders. It helps, but she’s still on the wrong end of a beating as I tap out for 6. With her at 8, I then follow up with an Angel of Mercy, going back up to 21 life.

Sam’s turn-6 Gaea’s Herald doesn’t change a thing. When I alpha strike her next turn, she uses the Warrior and Herald to gang-block my Monk, but down to 1 life she concedes after her next draw. 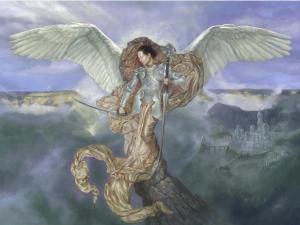 Once again, Sam leads with the Elvish Eulogist, after which she follows with a Gaea’s Herald and Farhaven Elf. I finally look to stabilise on turn 3 with a Venerable Monk, going back up to 19 and giving me a body to defend with.

This works until the rest of my turn, for once turn 4 rolls around Sam’s in with a Coat of Arms. Now it’s her turn to go large and she takes full advantage, attacking past my lone defender for 9. A second Venerable Monk restores me to 12, but not for long. An Eyeblight’s Ending clears one aside, and Sam comes in for 9. I forget her deck has a Giant Growth and let them past, but Sam reminds me in the worst possible way as my deck gets blown out.

Is this the quickest match we’ve ever played for the site? I’m not sure, but it’s certainly a contender. It’s also a testament to just how explosive these two decks have the potential to be. Although Wings of Light is a little more gradual than Ears of the Elves in that regard, both have the ability with a single card to boost their forces across the board. On the other hand, while Glorious Anthem isn’t as volatile as Coat of Arms, it can come down sooner. Although we didn’t intend it when we matched them up, the two decks make quite a pair against one another.

On balance, Wings of Light is fairly well put-together. Its easy mana curve means you’ll have little difficulty in deploying your troops, and you won’t often have an Anthem sitting about with nothing to boost. The lifegain suite is incidental, attached to useful and relevant creatures, though the trio of Holy Days might be too deep an investment when what would better serve you in the long run is a little more proactivity. Still, the deck is good at stalling for time while it digs for its vital enchantments, even as that stalling can often be simply restoring damage done rather than having consistently good blocking options.

On the downside, the deck does rely somewhat heavily on the Anthems, and a failure to find one in a match can drastically hamper the deck’s chances of winning. The Goldenglow Moths, for example, are far poorer as 0/1’s instead of 1/2’s. Add that on top of the Angelic Walls, and Wings of Light’s threat density is somewhat thinner than some other decks. Thought Angelic Blessings and Holy Strengths help offset that somewhat, both of these options leave you vulnerable to being two-for-one’d by a Terror or Lightning Bolt. This also gives the deck a high “durdle factor,” as you can certainly draw a large number of conditional or do-little cards that don’t advance your board state.

Still, it was a lot of fun to play this strategy, and it acquitted itself well against Sam’s Ears of the Elves.

Hits: Deck can be very fast with a cohort of fliers and a Glorious Anthem (or two); aggressive mana curve helps ensure maximal deployment before the Anthems hit; incidental lifegain suite well-positioned to let you freely trade life for time

Misses: Deck’s effectiveness is heavily reliant upon the Anthems; heavy employment of creature augments leaves you vulnerable to being two-for-one’d; deck susceptible to durdling while it tries to draw its best cards