Some things just happen to feel ‘right.’ Consider, for instance, the “classical” four elements: air, earth, fire, and water. Although modern science has presented us with a glorious, periodic table of over a hundred of them, the notion of the four elements has persisted. A look at the notion’s history reveals a remarkable perseverance that has transcended time and place. Plato ascribed the association to a Sicilian philosopher, Empedocles, around 450 BC, and this may have descended from the earlier Babylonians and their epic of creation, the Enuma Elish. Interestingly, the Babylonians themselves saw five elements, splitting “air” into “wind” and “sky.” Around a century later, Aristotle would ‘restore’ a fifth element to the mix, aether, the stuff of the stars and heavens.

Earlier still in India, learned sages had themselves identified five elements that mirrored what would be found in Greece, though their fifth element was void. For the Tibetans, this fifth element was space. Buddhism would export the concept of five elements to Japan, where it, too, found currency. And here we are, millennia later, and the concept is still a familiar one for most reading this.

Mark Rosewater has made frequent mention of the “Golden Trifecta,” that inspired brilliance from Magic creator Richard Garfield that has most accounted for the game’s enduring appeal. One of these is the collectability of the game, the idea that buying a box of cards only gave you some of the cards that were available, as opposed to a traditional game like Monopoly where you get all there is in a single box. Another is the mana system, that wonderful, damnable mix of chance and strategy that offers just enough variance to make the game work. The final third, of course, is the colour wheel.

Surely Garfield must have had some thought of the classical elements and their resonance when he devised a circle of five allied or opposing colours, another system that happens to feel ‘right.’ From the very outset the five he selected had well-defined flavour, even if their mechanical role over time would evolve somewhat from the point of origin. You had the classical elements split between Red (fire, earth) and Blue (air, water). Another dichotomy presented itself in White (good) and Black (evil), while Black (death) was also the foil of Green (life, nature).

When setting about to create their first slate of planeswalkers, Brady Dommermuth and the creative team used the colour wheel as a natural place to start. Each colour would have its own planeswalker, so it stood to reason that that ‘walker should represent their colour. And so they did, but in different ways. Some planeswalkers were the purest embodiment of their originating essence. Here we find the fiery Chandra, the necromantic Liliana, and the primal Garruk. Ajani started out as a fairly straightforward healer (originally named Theseus the White), though he quickly was fused with the identity of the Naya shard in Shards of Alara, and grew away from his mono-White point of origin. 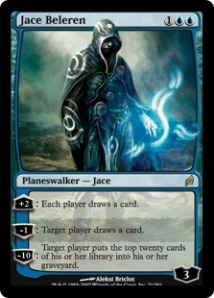 Of the five original ‘walkers, only Jace Beleren was given to the same depth of character as his colour, perhaps natural given the relative introspection Blue is frequently associated with- you don’t see many Blue ‘men of action.’ While Garruk never seemed to exhibit any White tendencies and Chandra kept her peanut butter out of Liliana’s Chocolate, Jace stood at the crossroads of his colour’s two natural allies, White and Black. Jace, Wizards breathlessly wrote in his introduction, now faces the same problem of every exceptional being: the temptations of power. Would he be a hero and take his place as a protagonist in Magic’s new pantheon of heroes? Or would he become a predator of the mind, using his powers for selfish ends? As befitting his place in the colour wheel, it hasn’t always been clear.

Jace has seen four different printings of his planeswalker card since Lorwyn. The original Jace Beleren focused, simply enough, on card drawing with a milling finisher. With milling- alongside discard- being two of the ways to thematically represent the removal of thoughts from the mind (and the only one on-colour), this was a natural fit. It wasn’t until his second iteration in Worldwake, though, that he made the splash that’s helped cement his role as one of the game’s marquee names: Jace, the Mind Sculptor. The first four-ability planeswalker, Jace shattered player’s wallets with the same ease that he did the metagame, taking a dominating place in the Standard of his day.

His third version debuted in Magic 2012, and was considerably toned-down- not least because it cost a full five mana, considered the high point of planeswalker playability. This latest Jace once again combined card drawing and milling, but in such a way that he was his own win condition. If you managed to mill your opponent to less than twenty cards in the library, his ultimate could take the game on the spot. For a brief moment in time it looked like mill might make a return to competitive play, but with the following block- Innistrad- filled with cards that were quite happy to sit in your graveyard (flashback), this became somewhat less viable.

Most recently, Return to Ravnica has given us a new version of Jace, the Architect of Thought. This was only the second Jace that had the ability to protect himself, after Jace, the Mind Sculptor. Rather than bouncing threats back to hand, this latest Jace simply offers a flat debuff to any attackers. He’s also able to offer card drawing (with a minor Fact or Fiction effect), and an interesting ultimate that doesn’t seem on first blush to be as game-winning as previous incarnations.

Jace’s first Duels of the Planeswalkers deck, Thoughts of the Wind, emphasizes some of Jace’s more noteworthy traits… though it does leave the angstiness in the sideboard.

The Construction of a Defense

Thoughts of the Wind takes a characteristically controlling approach to the game through both permission and tempo, giving you a number of defensive or reactive options to go with the solid corps of evasive beaters. The deck is at its best when it can get ahead of the opponent with aerial threats, bounce or counter its way to pole position, and finish things off with one of its finishers or a swarm of smaller fliers.

To begin with, there’s a full playset of Cloud Sprites, a common from Mercadian Masques. A strictly-worse Flying Men thanks to their inability to block grounded creatures, they nevertheless have a good shot at getting in for some early damage thanks to their evasion. Intriguingly, there are no two-drop creatures here, so it won’t be until at least turn three that things start to get going.

The next creature we find is a purely defensive one, the Wall of Spears. A 2/3 defender with first strike, the Walls can easily hamper any opponent looking to overrun you with cheap attackers and make up the defensive backbone of the deck. A full playset gives you the best chance of finding one on turn 3, and they are just as good against stompy decks if you are fortunate enough to find more than one.

Next up is the Cloud Elemental, the next entrant in your air force. Like the Sprite they are “high-flying,” and can only defend you from aerial threats. Still, they’re a reasonable midgame play, and a little extra power in the sky goes a long way here. Finally, you get a pair of Phantom Warriors, the classic 2/2 unblockable creature from Weatherlight that so often finds its way into precon decks. Although they don’t fly, they serve precisely the same role- get in for strikes on your opponent’s life total that your opponent has difficulty dealing with.

The four-drop slot is occupied by a single creature, albeit one you get four copies of: Snapping Drake. Featuring an inverted power/toughness from the Cloud Elemental and no limiting blocking restrictions, the Drake is one of the deck’s bread-and-butter cards that will be doing much of the deck’s heavy lifting. The heaviest lifting, however, will usually be behind one of your two Air Elementals, the deck’s pair of closers that have been around since the dawn of the game.

The noncreature suite in Thoughts of the Wind is packed with options to give you a controlling interest in how the game unfolds. For one thing, with a total of eight counters you’ll almost always find yourself with one in hand, ready to use. A playset of Cancels are your catch-all spell, but for a cheaper cost you also have access to a pair of Negates and Remove Souls. These are more limited in what they can impact, but the cost is reflective of that. All together, this gives you a fair amount of control over the board once you’ve established yourself, and can deny your opponent their best spells against you.

One weakness of permission is that it can do little to improve its situation once your opponent has managed to resolve a threat. Perhaps they baited the counter with a tempting target before playing their real option, or maybe they just caught you tapped out. Either way, you have a recourse to a few cards that can help rewind the clock a little, perhaps giving you a second chance to counter the offending card. A pair of Unsummons can bounce a creature back to hand, while Boomerangs– while costing twice as much- have a great deal more application. There’s also a copy of Stronghold’s Evacuation for when things get truly dire. Since this will return your creatures as well, you must have a care when you play it. That said, as an instant it means you’ll get the jump on your opponent, playing it at tend of their turn and getting your creatures out first. 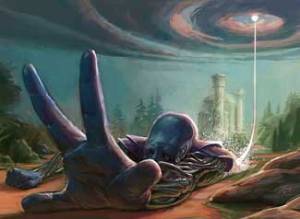 A pair of Deluges also give you a little extra measure of creature control. Since most of your creatures fly, this will hardly affect you, but it can more or less act like a Fog effect and buy you precious time when you need it. Meanwhile, twin Tidings help refill your hand should you find yourself low on cards.

The last two cards in the deck are a pair of rare cards. Persuasion is a Mind Control pre-skin from Odyssey, and like all such effects is an automatic two-for-one. By removing a threat of your opponent’s while adding one to your side of the board, it’s a tremendous tempo swing. As good as that is here, the other card- Memory Erosion– is dreadfully out of place. This one card gives the deck an entirely new win condition it didn’t possess before, and that’s exactly the problem- the card has zero support. There’s a lot of good mill spells that need to be included if decking your opponent is a serious aim, and this card as a singleton just doesn’t cut it. To be sure, Blue decks often prepare for the possibility of the game going long (especially with permission), but most won’t go anywhere near that long with Thoughts of the Wind. This is only marginally better than a dead draw.

And there you have it, the inaugural deck of the mighty Jace Beleren. We’ll take it to battle to see how well it performs, and return with a verdict.