Return to Ravnica: Creep and Conquer Review (Part 1 of 2) 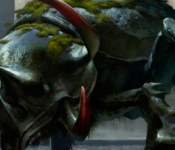 Moreso than any other preconstructed product in recent memory, the Event Decks have become a lightning rod for attention and criticism amongst the Magic community. To be sure, there isn’t a thing that Wizards could issue that wouldn’t have a Greek chorus of detractors, bemoaning some or other aspect of the release- some of it fairly, some of it not. But perhaps because of the unique intersection that the Event Decks product line inhabits it finds itself much more squarely in the community’s sights.

Intro Packs, Duel Decks, and the annual multiplayer release (like Planechase 2012) all target casuals- and rightly so. The Event Decks, however, are built for competitive play at the Friday Night Magic level, so they come in for considerably more scrutiny. To be fair, they begin with a major handicap, in that they are subject to rarity quotas even before they’re designed. A Standard landscape which stipulated that a legal deck could contain no mythics and only seven rares would be virtually unrecognisable compared to today’s meta-game- though it does make for an interesting mind experiment.

The earliest answer to this problem, as we’ve noted before, was to adopt a mono-coloured aggro strategy and look to draw strength from speed. No mythics doesn’t much matter when your opponent’s $40 planeswalker doesn’t ever leave their hand. Still, the tactic was not without its drawbacks, particularly the risk of consumer turn-off from seeing effectively the same deck with a different coat of paint each release. After a long and reasonably prosperous run, mono-colour aggro took a vacation after Avacyn Restored.

In its place came the offerings of Magic 2013, giving us a two-coloured deck (Repeat Performance) and even a three-coloured one (Sweet Revenge), only the second one in Event Deck history after Deathfed. In keeping with Ravnican custom, both Return to Ravnica decks are two-coloured. In an ironic twist, that might well cut to the heart of the problem.

One of the reasons that the guild system went over so well in the original Ravnica is that it gave a name to colour combinations that players had long been used to playing but without any sort of casual frame of reference. A Blue and Black deck was “Blue/Black” in the years before Ravnica, but now you could call it the much glossier-sounding “Dimir” and have others know exactly what you were talking about. We’d see much the same with Shards of Alara a few years later, this time with three-colour decks. In both cases, the names each set bestowed upon particular colour combinations persisted long after the sets themselves had rotated out.

Perhaps the most common complaint about the two Return to Ravnica Event Decks is that they are Rakdos and Golgari in name only, containing mostly cards from earlier sets. That’s not entirely fair in the case of Creep and Conquer, boasting a full one-third of the deck carrying the Return to Ravnica set symbol- a ratio which goes up quite a bit when you discount basic lands. Therein lies the irony, however. After a number of years of Magic players referring to Green and Black decks as “Golgari,” even outwith a Ravnican tie-in, Wizards now has released a “Golgari” deck that isn’t sufficiently Ravnican.

In fairness, though, that should not be high on the list of considerations. Duel Decks, Intro Packs and more are there to offer flavour as well as playability. The Event Decks have a more singular mission, and if they dilute that with concerns about card content, they lessen their ability to accomplish this core objective within the means offered at their disposal. That isn’t to say that some concerns about card content are invalid- some have rightly pointed out that certain Event Decks have the Standard lifespan of a mayfly (see: Vampire Onslaught).

In light of that, we now turn to Creep and Conquer as a deck rather than a symbol of the set it hails from. The core strategy of the game is similar to releases in the past, focused as it is on creature-based aggro. But Creep and Conquer puts a particularly Golgari spin on this by changing up the tactics. Rather than flooding in with a ground-based assault, Creep and Conquer- while having that dimension- layers in another plan of attack: using attritive losses in the red zone to bolster and fortify aerial options for an evasive kill.

Towards that end, the deck is well-stocked with early plays designed to engage with your opponent and buy time to get your plans in order. The Slitherhead, for instance, is a simple, on-curve 1/1 that happily keeps any weenies from trespassing into the red zone. When it inevitably dies in your service, it can then be scavenged to add a +1/+1 counter to one of your closing options. There’s also a singleton Ulvenwald Tracker, the deck’s first rare card. The Tracker is a useful enabler for your deck, helping you trade your scavenge creatures with their counterparts across the table. Since you get added value from your creatures that your opponent does not, this is a great way to start putting yourself ahead. It’s also a great answer to any nettlesome utility creatures your opponent is playing that you can’t find answers to.

Next up we find a wealth of options in the two-drops, beginning with a full playset of Drudge Beetles. Another familiar face from the Golgari Growth Intro Pack, these are solid if not particularly exciting. Their scavenge sets you back six mana, making them only playable towards the end of the game, although sometimes that’s all you’ll need to win a race. A trio of Dawntreader Elk offer you another 2/2 body, with the assurance of being able to have enough mana deeper into the game to get those crucial scavenges off.

From there we fins another trio, this time the Korozda Guildmage. The Guildmage offers a couple of very useful abilities here. First, there’s the +1/+1 and intimidate ability, which can get your largest creatures slip right through your opponent’s defenses unmolested, as well as provide a mana sink for extra damage. The second ability- fairly useless in Golgari Growth is well worth a second look here. The ability to trade out your creatures for a gaggle of Saprolings isn’t the most exciting, though it certainly has its uses to wring every last bit of use out of a creature that’s about to die. Just as important, however, is the provision of a sacrifice outlet to make your Tragic Slips full strength at-will.

The final creature here is the Daggerdrome Imp, one of two creatures alongside the three-drop Vampire Nighthawk that are intended to play the closer’s role here. With few exceptions, most of the creatures in the deck tend towards the small side, but the idea is for you to ‘build your own beater.’ One of the two primary methods to do that is to pile +1/+1 counters onto the Imp or Nighthawk, crafting a massive aerial beater that puts the game further and further out of your opponent’s reach with every swing thanks to lifelink.

The other route to your build-a-beater adventure finds its first representative here in the three-drops as well. With the soulbond mechanic from Avacyn Restored, you can pair up an Imp or Nighthawk with a Trusted Forcemage, giving each a +1/+1 bonus for as long as the pairing lasts. There’s also a welcome pair of Dreg Manglers here, offering superb value for their cost.

From here the deck tapers off quite a bit, with only five cards in the remaining two slots in the mana curve. For your four-drops, you have the penultimate scavenge option in the Deadbridge Goliath, a creature whose 5/5 size makes it perhaps even more useful alive than dead much of the time. The soulbond path gets two more cards here in the Druid’s Familiar and Wolfir Silverheart, the latter of which in particular can tun your Imp or Nighthawk into a game0ending proposition on its own for only five mana.

Finally, for a bit of library digging for when necessity arises, there’s a Disciple of Bolas from Magic 2013. In addition to being one more sacrifice enabler, the Disciple can help you draw through your library when you need help finding a threat or an answer.

An Example to Others

In order to give this creature-centric strategy its best chance of winning, Creep and Conquer packs a fairly solid removal suite. Leading the way is a playset of Tragic Slips, which can kill virtually anything for only one Black mana provided you’ve timed events to take advantage of its morbid. Thanks to your sacrifice options, you’ll have a fair chance of doing just that even outwith the normal give and take of combat. 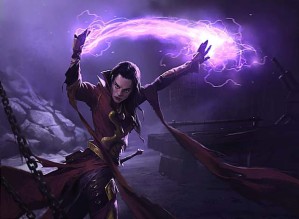 Next up is Victim of Night, and the deck gives you a pair. Outside of Block Constructed, you’re by no means certain to be facing a steady stream of Vampires, Werewolves, and Zombies, making this a fairly safe bet and an easy sideboard option in those times you are. Finally, an Ultimate Price rounds things out by letting you kill a substantial number of creatures for an easy-to-cast two mana. Its value is somewhat mitigated in Return to Ravnica, just as Go for the Throat was in Scars of Mirrodin block, but like Victim of Night it should hit more often than miss.

Finally, there’s a pair of Golgari Charms to round things out. Acting variously as creature removal, enchantment removal, and a combat trick all in one, you’ll often find use for these in the course of the match thanks to their welcome versatility.

We would be remiss if we didn’t take a moment to acknowledge the nonbasic land suite present in Creep and Conquer, a must-have for any polychromatic deck. The options here are fairly underwhelming, though you can hardly expect to find much invested here given the rarity limitation. Four Evolving Wilds and a trio of Golgari Guildgates are about as good as you might reasonably expect, though you get some rare support here in the Woodland Cemetery. You also have one last sac outlet in the Grim Backwoods. Overgrown Tombs you’ll have to supply yourself!

For the sideboard, you have a few interesting options depending upon what you’re facing. Against a deck packing plenty of removal, you have resilient replacement options like the Strangleroot Geist and Thragtusk to diminish the return on your opponent’s investment. Vile Rebirth is a silver bullet against graveyard-based decks such as those with loads of Zombies, and gives you an extra creature in the process.

If your opponent is playing more than just creatures to stop you, you also have some extra removal effects like Ghost Quarter, Bramblecrush, and even a pair of Duresses for some hand sculpting.

On the whole, Creep and Conquer offers a welcome twist on the customary creature aggression. We’re looking forward to taking it into battle, but first we’ll be turning to the other side of the city, and a very wicked carnival indeed.