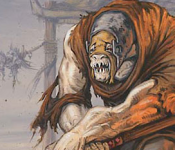 While the war against the Spirit world rages, the Ogres in their mountain homes have been making diabolic pacts with the Oni, and Dark Devotion shows just what they’ve been up to. Has the power been worth the price? There’s only one way to find out as I pit them against Jimi’s Ninja of Ninjutsu.

Jimi’s on the play, and we trade initial land drops before she finds the opener in a  Minamo Sightbender. When I cough up nothing more impressive than a Swamp, she’s able to nick first blood with the Sightbender and use ninjutsu to swap it for a Ninja of the Deep Hours. That puts me down 2, and her up a card. Sealing the breach, I play a Villainous Ogre and pass. Or does it? There’s a little line of text on the card that Jimi appears to miss- “Villainous Ogre can’t block.” Still, be it from missing the implication or somehow wanting to hang back a defender to keep the Ogre at bay, the Ogre’s presence holds off any fuether immediate attack.

Even when a turn-4 Kaijin of the Vanishing Touch lands, Jimi’s forces defend the hearth. I play a Bile Urchin and pass. Back to Jimi, she plays a second Minamo Sightbender and ends her turn. I play a Swamp.

Now turn 6, Jimi sticks a Genju of the Falls on an Island, then attacks in with it for 3 in the air. At end of turn, I burn out Jimi’s Ninja with a Torrent of Stone. Down to 15 life, I play Heartless Hidetsugu, though Jimi thwarts him with a Mystic Restraints on her next main phase. Following up, I attack with my Villainous Ogre which gets blocked by the Kaijin. The Kaijin dies, but the Ogre returns to hand as well. I replay the Ogre, then add a Takenuma Bleeder.

Now turn 8, Jimi then replaces her Kaijin of the Vanishing Touch with another. I swing in for 6 with my Ogres, losing 1 life from the Bleeder but dropping Jimi to 14. I then add a Sokenzan Bruiser and pass. Next turn, Jimi summons a River Kaijin, but has no other play. I turn my trio of Ogres sideways for a brutal 9 damage. The Bleeder is blocked by the River Kaijin, while the Bruiser is stymied by the Kaijin of the Vanishing Touch. This leaves Jimi at 11, with me at 13. I then replay the Bruiser, and add a Shinka Gatekeeper for good measure.

Now desperate for bodies, Jimi pays full price for a Mistblade Shinobi and passes. I again swnd in the swarm of Ogres for 12, leaving only the Bile Urchin behind. Jimi gang-blocks, trading the Shinobi and Sightbender for the Gatekeeper, then absorbs another Ogre with her River Kaijin. The final tally sees her at 5, with me down to 10. Her next-turn Walker of the Secret Ways is a chump-blocker, and when I send in 9 power of Ogres and the Urchin next turn, she’s left at 1 life. Victory is just a popped Bile Urchin away.

Alas, that’s Jimi at her back’s limit for sitting, and with the match halfway over she taps her tag team partner, Sam, to take it from here.

After trading initial land drops, Sam leads the game off with a Minamo Sightbender, then follows with a hardcast Mistblade Shinobi after a 1-point attack. Over to me, I play Oni Possession on the Shinobi. Next turn, Sam’s forced to sacrifice a creature and sees off the Sightbender. She then attacks in with the Shinobi, but slips the noose when she ninjutsus in a Ninja of the Deep Hours, seeing the Shinobi return safely to hand and my insidious enchantment fall off to the graveyard. She then plays a replacement Sightbender and passes, happy to be a card up. For my part, I play my fourth Swamp and reveal that card I keep a shaky hand for- Yukora, the Prisoner.

Now turn 5, Sam uses the Sightbender to make her Ninja of the Deep Hours unblockable, then uses ninjutsu to swap it out for the Mistblade Shinobi. This cuts my incoming damage in half, but lets her bounce Yukora back to hand. Down to 16, I simply resummon Yukora. Next turn, however, Sam sticks Mystic Restraints on him, and he’s done for the game- my only consolation being, at least, that I have a persistent Demon on the board to keep my Ogres happy. My turn is a blank, and I pass.

Now turn 7, Sam attacks in for 2 with her Sightbender and Shinobi, but uses ninjutsu to return the Shinobi to hand and cheat out Higure, the Still Wind. I brace for impact and go down to 11, and Sam then tutors up the Walker of Secret Ways from her library. This puts her up a card and eases the pain when I blast Higure next turn, using a Torrent of Stone. Next turn she returns fire with the Sightbender, and again uses ninjutsu to bring out the Ninja of the Deep Hours. That puts me down to 9 and her up another card, after which she deploys the Walker of Secret Ways. In partial desperation, I play Oni Possession on the Walker, then add a Hearth Kami.

Sam sacrifices the Ninja of the Deep Hours to the Possession during her upkeep on turn 9, then attacks in for 4 with the enchanted Walker. I chump-block with the Kami to prevent any ninjutsu shenanigans, then watch her add a Student of Elements and Ninja of the Deep Hours. Back to me, I steal the latter with a Mark of the Oni. Next turn, Sam opts to sacrifice the Walker to feed its own enchantment, then plays a Kaijin of the Vanishing Touch and Mistblade Shinobi, looking to overwhelm. All I can do is play a Sokenzan Bruiser.

Now turn 11, Sam plays a Minamo Sightbender and Ronin Warclub, confidently unconcerned about deploying them in suboptimal order. I attack for 2 with my stolen Ninja, knowing I’m about to lose it anyway. She blocks with the Kaijin, so in order to get some use from it I cast an Overblaze to kill the Kaijin, though the returned Ninja still goes to Sam’s hand. Next turn she uses the Sightbender to bounce the Shinobi, bringing the Ninja of the Deep Hours back out and getting a free equip from the Ronin Warclub in the process. I’m rocked for another 4, after which Sam plays a River Kaijin and passes. Back to me, I summon a Villainous Ogre and Shinka Gatekeeper, but I know the cause is lost.

A turn-13 Genju of the Falls seals the game up, as Sam’s then able to deliver exactly lethal without a thing I can do about it.

Sam’s turn-2 Student of Elements is the game’s opening play, with her on the draw. I continue to lay land on turn 3, while Sam attacks in with the Student. This sets up another ninutsu swap, ushering in the Ninja of the Deep Hours for 2 points of damage and a free card. She then enchants an Island with Genju of the Falls and passes.

Now turn 4, I enchant the Ninja with an Oni Possession, ensuring its demise on her next upkeep. She replaces her loss with the Student of Elements and passes. Next turn sees me add a Frost Ogre, while Sam sticks a Phantom Wings on the Student to flip it to Tobita, Master of Winds. She attacks in for 3 with him to put me to 15, then deploys a Shuriken.

I send in my Ogre on turn 6 to hammer Sam for 5, then add a Painwracker Oni. Looking to race, Sam activates her Genju and sends it in alongside Tobita for 6. It’s a fatal overreach- my two beaters hammer in for 10, and an Overblaze on the Oni makes it lethal.

Although we haven’t played out the whole set, it’s probably safe to say that Dark Devotion is the runt of the Betrayers of Kamigawa litter. Ponderous and slow, it offers little dynamism in return for the hoops it demands you to jump through. The primary problem with the deck was just how conditional it played- it could never reach its full potential without a mix of Ogres and Oni, and you have so few of the latter to go around. 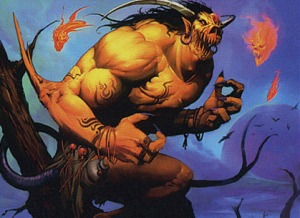 In return, while if you managed the magic mix you could do some impressive things, without it you were stuck with a nettlesome number of drawbacks. Your own cards were underpowered, useless, or even ended up hurting you by killing your own creatures or costing you life. Stuck on a midrange frame that already ceded the early game, you left yourself a narrow window of opportunity to take the game by the scruff of the neck. Otherwise, it just seemed like a lot of catch-up as your Ogres stood about waiting for the hoped-for Oni to inspire them. It also left the deck vulnerable to disruption- bouncing the right creature at the right time could have very fatal consequences (see: Painwracker Oni in game three).

For a Black/Red deck, the removal suite was very underwhelming. It tells you something about the deck that my most effective kill option was Oni Possession- though in fairness it might also speak to some degree to the card’s versatility. While I struggled to kill things that opposed me, cards like Kumano’s Blessing and Initiate of Blood sat around in my deck taking up valuable card slots. Both of these seemed geared as “silver bullets” against a soulshift ability that’s a marginal player on the stage.

As with any conditional, feast-or-famine deck you have to ask yourself if the payoff is worth the hassle. In this case, we’d have to conclude that it probably isn’t. The Oni-Ogre interplay is clever and well-represented here, but mechanically it just doesn’t match the interest of the other decks we’ve seen in the set.

Hits: Story dynamic between the Ogres and Oni nicely represented by deck’s interplay between the races

Misses: Lackluster removal suite; too little payoff for so much conditional draw dependence, and “combo” is fairly fragile; some very lackluster card selections