It’s time to break out the Betrayers of Kamigawa, and Sam is eager to get stuck into it. I’m piloting Ninjutsu, and to play the role of opposition Sam’s selected the Green/White Spiritcraft. Can my shadow warriors carry the day, or will we meet our match with Kamigawa’s abundant Kami?

Sam’s on the play for the opening clash of our Betrayers of Kamigawa coverage, and opens with a Plains. I play an Island, then tap it to enchant my Island with a Genju of the Falls. Back to Sam, she returns with a Petalmane Baku, while I next deploy a Student of Elements.

Now turn 3, Sam next adds a Baku of the Waxmane variety, which gets her a ki counter for the Petalmane. She attacks in for 1 with the Petalmane and passes. For my part, I play a Ronin Warclub and pass. Next turn, Sam swings with both Baku for 3, then plays a Kami of the Hunt. This puts a ki counter on each of the two Baku, but it’s all she has. She passes turn, and I then summon a River Kaijin, equipping the Warclub as a welcoming gift.

Sam keeps the summoning chain going with a turn-5 Loam Dweller, giving her Baku another counter apiece. It also pumps the Kami of the Hunt, and Sam then cashes in a ki counter from the Waxmane to tap down my Kaijin. With the door wide open, Sam obligingly sends in the side to hammer me for 6. Down to 10, I put a Field of Reality on the Kaijin, then attack in with it for 3. I then add a second Student of Elements, but it’s fairly obvious how this game is going. Next turn, Sam adds a Lantern Kami, giving her Baku more counters still. She attacks in with the Kami, the Dweller, and the Petalmane for 6, but I chump the Kami with my Student to reduce the incoming damage to 3. Sadly, my turn is a blank.

Now turn 7, Sam taps both of my remaining creatures down with the Waxmane Baku, though I freeze her Kami of the Hunt in its tracks with a Mystic Restraints. Still, with her field growing I’m still looking down the barrel of 6 damage, leaving me clinging to life at 1. I draw my next card, then scoop.

Once again I lead with a Genju of the Falls, resolving to get more use out of it this go-around. Sam plays a Forest and passes, so I follow with a Student of Elements. Sam then finds a Petalmane Baku and deploys it. Back to me, with my mana free I go ahead and activate the Genju, swinging in for 3 in the air. Down to 17, Sam follows with a Kami of the Hunt, giving the Baku its first ki counter.

Now turn 4, I play Lifted by Clouds to give my Student of Elements flying, which is exactly what he needs in order to flip into Tobita, Master of Winds. I send in Tobita, and just like that Sam’s down another 3. Back to her, Sam pops a ki counter off the Baku to filter some mana, which lets her play a Faithful Squire. She then attacks for 3 of her own behind the Kami and Baku, putting me down to 17.

Next turn, I activate the Genju again, letting me fly in for 6 off both beaters. With Sam down to 8 but showing signs of life, I then shore up my defensive position with a Kaijin of the Vanishing Touch. Over to Sam, she then plays the nuisome Waxmane Baku, giving the Petalmane a ki counter and pumping the Kami of the Hunt. She attacks with the Kami, and I opt against blocking.

Now turn 6, I go in again with my fliers. When Sam declares no blockers, though, I use ninjutsu to bring in a Ninja of the Deep Hours, returning the animated Island back to hand. The Genju aura falls off and goes to the graveyard, but then returns to my hand. Sam’s now down to 3 life, and the Ninja has put me up another card. I replay both the Island and the Genju, leaving me no worse for wear- in essence, earning a card for doing 1 less damage to Sam. For her part, Sam summons an Orbweaver Kumo to give her some cover in the air. Again her Kami is buffed, so she sends it in alongside the Waxmane and Petalmane Bakus. I block the Waxmane with my Kaijin, but 4 damage still gets past to leave me at 10. At the end of turn, Sam then flips the Faithful Squire, who has sat idly by also collecting ki counters, and slots in another aerial defender in the form of Kaiso, Memory of Loyalty.

Next turn, I lock down Kaiso with a Mystic Restraints and pass. Back to Sam, she replays the Waxmane Baku, then attacks for 3 more with her Kami of the Hunt. Back to me, I then lock down her other air defender, the Orbweaver Kumo, with a second Mystic Restraints. This lets me send in my Ninja and Tobita for 5, and Sam is forced to play a Vital Surge to stay alive. I draw a Soratami Cloudskater off the Ninja and play it immediately. Sam has little hope of stopping three creatures in the air, and concedes after her draw.

After trading land drops, my on-the-draw Kaijin of the Vanishing Touch is the game’s first play, though Sam’s right behind on turn 3 with a Faithful Squire. I then double down with a second Kaijin, forming a very prickly wall of defense for Sam to deal with.

Now turn 4, we both play land and pass, but Sam breaks the streak with a turn-5 Horizon Seed, giving the Squire its first ki counter. My turn passes with only a land drop to show for it, as does Sam’s following, but on turn 6 I land a Soratami Cloudskater.

The run of whiffs continues on turn 7, with Sam playing a Plains and passing. Back to me, I send in the Cloudskater for 1, using ninjutsu to swap it out for a Ninja of the Deep Hours to double the damage output and put me up a card. Next turn, Sam plays a Traproot Kami, giving a second ki counter to the Squire. It’s fine enough, but well trumped when I tap out for Tomorrow, Azami’s Familiar.

Now turn 9, Sam’s had enough and flips the Squire into Kaiso, Memory of Loyalty. back to me, I get my pick of the top three cards of my library for my draw thanks to Tomorrow, and I nab a Field of Reality. I then stick it to the Ninja of the Deep Hours and hammer in again for 2. This lets me draw a card, so again I get the best of three. Next turn, Sam attacks in with Kaiso for 3, then plays an Unchecked Growth spliced with Kodama’s Might to hammer me for 9. Under ordinary circumstances throwing those away for damage is dicey, but given her inability to get a hand on any of my creatures it makes her action much more understandable- if you can’t stop the creatures, stop the summoner! For my part, I attack in again with the Ninja for 2. This time, once no blockers are declared, I trigger Field of Reality to return to hand then use ninjutsu to swap out the Ninja of the Deep Hours for a Mistblade Shinobi, bouncing Sam’s Kaiso back to hand. I follow up with the Soratami Cloudskater, then enchant an Island with Genju of the Falls.

It’s now turn 11, and things are looking difficult for Sam. She replays the Faithful Squire, then gives him his first ki counter with a Kodama of the Center Tree. Back to me, I activate the Genju and go in for 4 alongside the Cloudskater. I’ve had fun toying about with the deck’s capabilities, but now it’s time to put the boot in. Over to Sam, she plays a Kami of the Hunt to give the Squire another counter, then triggers the flip at the end of turn into Kaiso once more. I respond by locking down her Kodama of the Center Tree with Mystic Restraints, then do it again to solve Kaiso once my turn rolls around proper. Leaving mana open, I send in the Cloudskater for 1 to put Sam to 10.

Now turn 13, Sam plays a Petalmane Baku and attacks for 3 with the Kami of the Hunt. I block with Tomorrow, baiting out Sam’s Kodama’s Might. Once she casts it, I simply Hinder it- and stick it to the top of her library. I have a Minamo’s Meddling in hand, but haven’t had any luck with it- the one time Sam spliced I didn’t have enough mana to cast it, and when I’ve had the mana Sam simply hasn’t spliced. Back to me, I play a second Genju of the Falls, activating both to send in a 7-point air strike. Down to 3, Sam has no way to stop everything I have arrayed against her, and concedes after her next draw.

So what happens if you throw a theme party, and no-one shows up in costume? That’s a bit what my experience with this deck today felt like, where our first three games (including the friendly) didn’t feel like there was much in the way of the namesake Ninja at all. Indeed, one could almost be forgiven for failing to even identify what the central theme of the deck was. This was somewhat remedied by the deck’s “updated premium version” some seven years later when Night of the Ninja was a part of the Planechase 2012 release, seeing the Ninja count go from eight to eleven. But here, you have to make do with what you have. 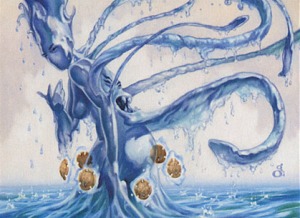 Kaijin of the Vanishing Touch

Rather than a deck filled with trickiness, it might be better to regard Ninjutsu as a Skies-and-evasion deck with a clever twist, giving the rest of the deck center stage and the Ninja second billing. Of course, that’s not as sexy a proposition as a “Ninja deck,” so there you have it.

Mechanically, the deck was a lot of fun to play. When I did find my Ninja I had no problem getting them into play for a bit of sabotage, though I did struggle a bit to find ways to get them in for benefit after the surprise factor was gone. And perhaps that’s the balance- much of their power lies in the unknowing and unseeing, the sense of expected for your opponent whenever you start turning dudes sideways. It was certainly the right bit of spice for the deck itself, as it took a fairly mundane archetype and gave it a very engaging dynamic.

Hits: Ninjutsu mechanic was a lot of fun to play, and gave a much-needed twist to the fairly staid and stody Skies archetype

Misses: Ninja are largely one-shot deals, though in fairness there is some level of infrastructure devoted to continuing their relevance after they’ve emerged from the shadows; removal suite is poor and somewhat unwieldly