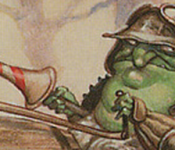 Earlier this year, we reviewed the Theme Decks of Tempest, the big set from the year before Urza’s Saga. In one of our reviews, we told the story of “Astral Ways,” a custom set designed by a gentleman by the name of Mike Elliot. As we related, Mike eventually was hired on by Wizards for R&D, and his Astral Ways set provided a great deal of grist for the creative mill at this time in the game’s development. It contained “astral” creatures which could not interact on the battlefield with “normal” creatures, which laid the foundation for shadow creatures like the Soltari Monk and Dauthi Marauder. It had a collection of creatures that shared their abilities with one another and great stronger the more you hand in play, which eventually became the Slivers. It also contained one additional mechanic we didn’t touch on in our retelling, a keyword called planeshift.

Planeshift was Magic’s version of an installment plan. You’d play a little less up front for a creature, but then had to make a second payment to keep it in play the following turn. This had within it a certain balance- the cheaper up-front cost meant that you could get the creature into play sooner, but this was offset by the fact that you were overpaying for the creature overall. Although it would get a name change- from planeshift to echo- the mechanic stayed intact from Astral Ways. Initially considered for Tempest, it ended up on the cutting room floor for that set but when Mike Elliot himself was chosen for lead design of Urza’s Saga, echo found an immediate home.

The original formulation of the keyword split the cost equally- you simply paid a creature’s casting cost twice. When brought back for Time Spiral, as most of Magic’s keywords and abilities were, it would receive a slight tweaking which allowed for mismatching casting and echo costs (see: Uktabi Drake). It’s likely not the last we’ll see of the mechanic, either- Mark Rosewater has mentioned that it was considered a success, and could well make a return.

For now, though, we have Special Delivery, a Theme Deck that showcases it.

On first blush, Special Delivery would appear to have a very fast, focused, and aggressive mana curve. Although the deck is certainly capable of hard-charging starts, overall charting the mana curve tends to flatter the deck a bit since it doesn’t take into account the fact that over half of the creatures will need to have their mana cost paid twice if they’re to stick around in play. Although echo will help you get an earlier start, it will also have a somewhat depressive effect on how much you’re able to foist onto the battlefield in a go.

The deck opens with a pair of Goblin Patrols, 2/1’s with echo. This card is a perfect example of the balance of the mechanic- a first turn 2/1 is a solid play, but overall you’ll be paying

for him, which is not a particularly good deal. A look at Green tells us that while the “creature colour” does get a marginally better deal with the Pouncing Jaguar, it still must overpay as well (compare the Jaguar with a Runeclaw Bear).

For added aggression- with a twist- we find a trio of Wild Dogs. Without echo, you’re getting a fully-paid-for 2/1 for one mana, something that in that era of the game would be considered rare (see: Savannah Lions). Of course, power is not without price, and the Wild Dogs are a very fickle lot. Fall behind in life and you’ll find the Dogs defecting to the winning side. Thanks to the deck’s burn options and speed, this is a fate you’ll frequently avoid, and the Dogs also have cycling to cash them in for another card should you draw one while behind on life.

Moving on to the two drops, we find a pair each of the Goblin War Buggy and Acridian. The Buggy is your basic 2/2 with haste, while the Acridian trades out a special ability in exhange for two more points of toughness. A parallel arrangement details our three-drop slot, with two Shivan Raptors and a couple of Cradle Guards. Red again offers us the weaker but more aggressive option in the 3/1 first striker with haste, while Green’s Cradle Guard is far more robust at 4/4- and even packs in trample to boot.

From the four-drops on, the deck’s remaining creatures no longer carry echo. Instead, you get some solid beater options to try and close out your opponent. The Anaconda and Bull Hippo are virtually identical, though each carry a landwalk ability that targets a different one of Green’s traditional enemy colours, Black and Blue. The deck gives you one of each, and a 3/3 body in this environment isn’t terrible even if you’re playing opponents who don’t rely on those colours. The deck’s first rare turns up here as well in the form of the Argothian Wurm. A massive 6/6 for four mana with trample, the Wurm is an early form of what would come to be known as the “punisher” mechanic as popularised by cards like Browbeat. If they don’t choose to sacrifice a land, you’re getting a massive beatstick.

The deck’s final two creatures sit at the very top of the curve at five mana. The Thundering Giants are 4/3’s with haste, which like some of your earlier options (the War Buggy and Raptor) let you punish an opponent for leaving their guard down.

As you’d hope, Special Delivery packs in a substantial burn suite to help your creatures set about their business in the red zone. A Shower of Sparks is a quick zing of damage to both creature and player, while your bread and butter burn spell is the three-mana sorcery, Arc Lightning. With the ability to divide its damage with no loss in output, it’s one of the game’s more efficient burn cards to date and the deck offers you three of them. More card advantage is on offer from a Jagged Lightning, which although quite steeply costed can burn out two creatures to the tune of 3 points of damage each. 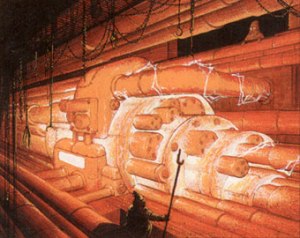 Speaking of tunes, there’s also an example of Urza’s Saga’s growing enchantments here in the Torch Song. Once on the battlefield, the enchantment collects verse counters until you’re ready to pop it, trading them all in for an equitable amount of damage. Finally, there’s a copy of Heat Ray, the deck’s one X-spell. Later notably reprinted in Rise of the Eldrazi, it offsets its instant speed by being applicable to creatures only. Although not technically burn, since it does so much more, the deck’s second rare card Wildfire also has the ability to ladle out a ton of damage. In this environment, 4 damage is enough to gut most decks’ armies, and the land loss can help you lock down a game. Thanks to the cheaper costs of echo cards, the land loss will usually hit you less hard than your opponent, giving another example of a symmetrical ability being bent to advantage.

The deck’s remaining cards offer a little bit of everything. There’s a touch of artifact removal (Scrap) as well as enchantment removal (Hush), while Green offers the expected Giant Growth variant in Symbiosis. Red checks in with a couple of auras in Shiv’s Embrace and Fiery Mantle, both of which give your creature Firebreathing (and the Embrace quite a bit more than that). The sleeping enchantments are represented here as well in the Hidden Spider and Hidden Ancients. These are quite a bit narrower than their White counterparts in the Sleeper deck, all of which just needed a creature to be summoned by your opponent to awaken. The Ancients require the playing of an enchantment to awaken, while in an elegant twist the Spider with reach comes to your aid when presented with a flying creature.

The deck’s final card is the echo enabler Thran Turbine. The Turbine offers you colourless mana, but on condition that you cannot use it to cast spells. Alas, the deck has no utility creatures which might also benefit from its largesse, so it will only be relevant when you’re summoning echo beaters. For only one mana, though, it’s hard to go wrong, and has a deceptive power to really accelerate your deck. When you don’t have to worry about tying up your mana paying for last turn’s echo creature, you can crank them out substantially faster.

As with all the decks, the Urza’s Saga cycling land make appearances here as well. The deck offers you two each of the Smoldering Crater and Slippery Karst, giving you the ability to throw them away later in exchange for more useful draws. In a deck that has such a tightly-wound early curve as this, though, you might find them at times to be as much liability as blessing.

That’s it for now! Check back in two days and we’ll have the playtest concluded, ready to give the deck its final evaluation and grade. See you then!