Whispers of the Muse: Depths of Power (M13)…and a contest! 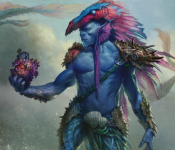 Magic 2013 brought some interesting Intro Pack decks our way, and players from all over have enjoyed cracking them open, tinkering under the hood, and seeing what they can come up with! One of the most exciting options for meddling about has been the instant-and-sorcery-heavy Depths of Power, fueled by Talrand, Sky Summoner.

We’ve received two different requests in the past few days to feature this deck here as a Whispers of the Muse feature. For those recently joining us, Whispers is our occasional deckbuilding series that takes a reader-submitted deck based on a precon, then turns it over to the community to tweak and modify. The timing couldn’t be better, as  just had an article published on Gathering Magic tinkering this very deck, so there will be ideas aplenty!

Oh, and one more thing- there’s a giveaway! That’s right, help our two readers tune their decks and you could be helping yourself to the Magic 2013 Intro Pack of your choice! Details to follow at the end of the piece!

Our first missive comes by way of Edward P., whose kitchen-table adversaries need to be brought to heel. Writes Edward,

I’m more of a kitchen table player, and my usual opponents have moderately powered but “anything goes” decks (meaning there are plenty of Counterspells, Lava Spikes, Blazing Salvos etc).

I liked the Depths of Power intro deck, so I bought two and boosted it up with various spells (some with flashback).

My victory plan is simple: put Talrand on the table or abuse Archaeomancer + Talrand’s Invocation to generate Drake tokens. Delver of Secrets provide more aerial power (with a little help from Ponder), while Fog Bank blocks everything.

Think Twice and Faithless Looting dig for cards and help generating Drakes (being flashback is definitely a big plus), while Mystic Retrieval and Noxious Revival recycle Invocations and bring Talrand back from the dead.

Here’s what Edward’s put together so far:

Edward’s still not completely happy with the deck, knowing it’s got some room to grow. He concludes,

Keep in mind that I build this around the cards I had (that’s why there aren’t any Counterspells or Snapcaster Mages, and only 2 Ponder…)

Are there any other budget-conscious cards I should think of including ? Should I replace Essence Scatter & Negate for two more Silent Departures ?

The ring and the counterspells are the only ways to protect Talrand – do I have other choices I overlooked ?

What do you think, does anything jump out at you that might make Edward’s dream of crushing his mates a reality? While you mull that over, we also have a request from Steve S.

Steven and his son, he begins, have returned to Magic after taking a year’s break. Wanting to play at Friday Night Magic, they quickly refreshed their collection with a Deckbuilder’s Toolkit, Depths of Power, and some boosters. Here’s what he has in mind:

I want to use this deck for Friday Night Magic at my local game store so I’ll need to keep it standard legal. Ideally I’d like to steer away from cards that will be rotating out in October but if there’s something that will really help the deck I will gladly include it – especially if I already own it anyway!

I want to keep the basic theme and key elements of the intro pack, focused around Talrand and drakes (or other flyers) with lots of spells for control and/or removal.

I need help with what secondary color would help this deck most. I can see lots of possibilities and can’t decide what would work best. I have lots of very good white flyers and spells but I could also see Black enhancing the removal and control nicely. I could keep it as Blue/Red and just tweak it a bit but I’m also seeing a nice mono blue! Needless to say, I really need help deciding which color would best enhance the deck based on the cards I have on hand.

This is my first attempt to re-work it as a blue/white but I have a lot of cards I want to use and can’t decide what to cut. I’m also wondering if black or red would be a better choice for secondary color for more removal options.

Steve’s already put something together, but he expressed that he hasn’t found much glory with it yet:

He concludes with a look at some of the other cards he’s been considering, but says he’d love any suggestions.

Virtue is its Own Reward… Plus an Intro Pack!

For helping one or both of our readers on their quest to hone Depths of Power, you’ll be entered into a random drawing to win the M13 Intro Pack of your choice. Comment on Eduard’s deck for one chance to win, and on Steve’s for a second. And heck, drop a comment on my piece over at GM and we’ll throw you in for a third.

As always, comments don’t have to be the great American novel, they simply have to have some thought to them and be constructive. Veterans of our giveaways know we don’t hold up some ridiculous bar to cross over, we just want to make sure that these two gentlemen get the help they need for their decks!

The contest will be open for one week, and we’ll draw the winner on 23 August. On behalf of Eduard and Steve, thanks for the help!