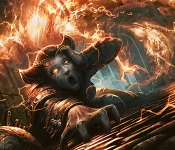 As we mentioned in our review of Sweet Revenge’s sibling, Repeat Performance, one of last year’s models attracted a level of criticism that was surprisingly sharp given the value of the cards within the box. Magic 2012’s Vampire Onslaught made quite an impression with a playset of Dismembers, a couple of Go for the Throats, a pair of Bloodghasts, and a Kalastria Highborn, but the discontent was more broadly applied. With a full twenty-five cards in the main deck coming from sets soon to rotate out of the Standard environment- either Zendikar block or Magic 2011- the ticking from the clock of obsolescence was particularly loud. But if we were to think that this would spell the end of the “encore” decks- one lust hurrah for a battle-tested strategy while it’s still capable of being run- we’d need to think again.

Arguably, the Core Set Event Decks are those most at risk for this sort of construction, since they occupy the time period closest to rotation. By the time the next pair of decks are released for Return to Ravnica, the cards on the verge of rotation will have already done so. That isn’t the case here, so we can expect each year to see the decks with the greatest chance of being gutted in a season’s time roll off the assembly line.

That said, there’s a large difference between an encore deck for an archetype about to depart the Standard environment, and one that can last another year more or less intact. Whether this represents a deliberate avoidance of a repeat of Vampire Onslaught is unknown, but we can say that this crop of offerings has a great deal more life ahead of them the second time around. One might be alarmed at a glance of the cards in Repeat Performance that will soon be rotating out- Blade Splicer, Brutalizer Exarch, Razorverge Thicket, Glimmerpoint Stag, Llanowar Elves, Stingerfling Spider, Stonehorn Dignitary, Sunblast Angel, Green Sun’s Zenith, Lead the Stampede– and that’s just in the maindeck. But the underlying concept of the deck is not particular to any specific card or mechanic central to Scars of Mirrodin Block or Magic 2012. Indeed, the hardest card on that list to replace for the deck is Llanowar Elves, and we’re almost sure to see either Birds of Paradise or some other Green accelerant  in the upcoming set. The rest can be swapped with other enters-the-battlefield creatures and the deck will trundle on just fine.

Even more resilient is the subject of today’s review, Sweet Revenge. In some ways, Sweet Revenge is a sort of anti-Vampire Onslaught. While both take an archetype well-defined from a previous block, the Burning Vengeance-led flashback.dec is quite firmly in the world of Innistrad. When rotation rolls around in October, Sweet Revenge will barely register it. Sure, you’ll need to plug the holes left by Slagstorm, Red Sun’s Zenith, and a Darkslick Shores, but who wants to bet that there won’t be a nice Red X-spell for damage, some available sweeper option, and a dual land? Anyone?

Consequently, this makes Sweet Revenge a good pick-up for the very market segment the line purports to serve- those just getting involved with competitive play. With the assurance that the deck won’t be quickly gutted, the aspiring FNM combatant won’t have to worry about trying to resuscitate a dead patient, and instead make a few pinpoint improvements that will help build confidence and comfort in the deck. If you can only put one deck on your list and you need to make it last, this might well be the one.

Sweet Revenge offers an almost symmetrical counterpoint to the creature-laden Repeat Performance, giving the decks a rather novel bit of balance and invoking memories of Stronghold’s near-creatureless classic The Sparkler. Indeed, the paltry number of bodies on offer here is largely for defense, and you won’t land a one of them until at least turn 3. The first offering is a pair of Armored Skaabs. In a deck packed with flashback creatures these are a fine option. Some have felt that Magic 2013’s Augur of Bolas would be more fit for purpose, but there are a few reasons that that is the poorer choice. The Skaab gets the nod in part because its refuse goes into your graveyard rather than the bottom of your library, and also because it doesn’t die to your own sweepers.

Next up is the darling of the Avacyn Restored Intro Pack Solitary Fiends, the Fettergeist. They’re perfectly fit here, where you’ll often have them as your only creature in play. Meanwhile, unlike the Skaabs, the Fettergeist also poses an impediment in the air. The last creature- a four-drop Firewing Phoenix– is found there as well. The Phoenix is your deck’s major offensive threat should opportunity present itself. It hits hard, and unlike a Fettergeist death is only a temporary state of being.

Sweet Revenge employs the Phoenix as a hedge or last resort. If all goes according to plan, any damage it inflicts on your opponent is just some fiery icing on the cake.

The Will to Fight

That’s because the combo engine at the heart of the deck is one that’s designed to generate a repeatable string of direct damage anywhere you need it- to your opponent’s creatures, planeswalkers, or your opponents themselves. The deck hinges upon a single card, Burning Vengeance, so pray your opponent isn’t running a couple of Surgical Extractions in their sideboard. From there, the deck packs in a ton of flashback options, letting you fill your graveyard with cheap re-buys and then start chaining them together once you land a Vengeance or two.

Most of these center around damage infliction or card advantage/draw quality. The deck has no shortage of burn options, beginning with a pair of Geistflames and layering in a trio of Pillars of Flame. On its own the Geistflame isn’t particularly impressive, though Repeat Performance’s mana dorks awake in the nght at the shivering thought of it. Instead, they really blossom with a Burning Vengeance in play, becoming the functional equivalent of a Burst Lightning with kicker- but with greater targeting versatility. For greater single-target firepower, there’s also a copy of Red Sun’s Zenith.

With so few creatures at your disposal, your opponent will almost certainly be outnumbering you in the red zone. Let them (over)commit, then blast the board with one of your sweepers. A Rolling Temblor blasts all non-fliers for 2, while a pair of Slagstorms hit 1 point harder- and don’t care if it has wings or doesn’t. In addition, the Slagstorms can reach your opponent’s life total, even if it means yours has to go down a bit as well. For non-burn removal, there’s a miser’s copy of Silent Departure to contend with.

Since the deck so heavily relies upon a few key cards, being able to find them is paramount. Towards this end, a significant chunk of your resources is devoted to churning through your library. Think Twice lets you draw a card, then flashback for a second. A trio of Forbidden Alchemies let you dig deep into your library, with the added upside of raining flashback cards into your graveyard for later recasting. A full playset of Faithless Lootings help you sift for the answers you need, while Desperate Ravings puts you up a card while seeing more of your library. You get a playset of those at your disposal as well.

Sweet Revenge also has a fair number of nonbasic lands to help even out the deck. While most of the deck is Blue and Red, you also need Black to flashback your Forbidden Alchemy.This comes to you via a Darkslick Shores, a single Swamp, and a playset of Evolving Wilds. Another of the deck’s rare slots is taken by a Sulfur Falls, while a final one is issued for a Desolate Lighthouse– one more way to move rapidly through your deck.

Whispers of the Ancients

The sideboard for Sweet Revenge can help you tinker the deck against a heavy creature assault or a slower, controlling one. If the amount of red zone pressure your opponent brings to bear in the first game is too great to withstand, you get a pair of Arc Trails and another of Dismember. If instead you’re up against a control deck, you might pivot and introduce a bit more aggression into the mix. A full playset of Screeching Skaabs offer early beats while synergising with the deck’s overall theme. A further four Bloodcrazed Neonates can quickly get out of hand if your opponent has no easy way to solve them. Finally, there’s a trio of Secrets of the Dead to throw a little more gas into the tank in terms of card drawing. Too slow and conditional to deploy against quick-tempo decks, a slower matchup is the perfect environment to try and outrace on card advantage.

That concludes our look at the 2013 Event Decks- now it’s time for playtesting! We’ll be back in two days with the result from our opening tilt, and a final verdict on Repeat Performance.