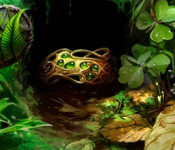 Green fatties get their turn in the spotlight as Wild Rush goes in for the playtest. Sam’s at the other end of the table, readying her life counter. All that stands in their way is the mighty Sole Domination deck, packed with exalted. It dismantled its opposition during its playtest… whose aggression will prove the greater?

It’s Sam’s choice to open up the match, and she opts to be on the play. She drops a Swamp and passes, while I follow with a Forest. Next she deploys a Plains to help bring a Knight of Infamy online, while I similarly hit my land diversity with a Swamp.

Now turn 3, Sam swings in alone with the Knight, which gets a buff from its own exalted. She then adds a Walking Corpse and passes. Back to me, I hit my third land drop for a Deadly Recluse. Next, Sam summons a Servant of Nefarox, letting her attack in with the Walking Corpse for 4. I let it through, and fall to 13. For my part, I play a Forest and pass.

Now turn 5, Sam’s relentless with the exalted beats, bringing out Guardians of Akrasa before turning the Corpse sideways for 5. This time, I take it out with the Recluse and buy myself some time. At the end of Sam’s turn, I then flash in Yeva, Nature’s Herald, who goes in on the attack the first chance I get to put Sam to 16. I have no other play, however, and pass the turn. Back to Sam, she plays a Duskmantle Prowler, attacking with it for 6. At the end of Sam’s turn, I then flash in a Primal Huntbeast. Once my turn arrives proper, I attack in again with Yeva. Sam again declines any blocks (I’ve been holding a Yeva’s Forcemage and hoping she indulges me), and sets her life counter to 12.

A turn-7 Angelic Benediction lets Sam’s Duskmantle Prowler attack as an Eldrazi-sized 7/7, and my hand is forced. I flash in a Vastwood Gorger, then gang-block with it and the Huntbeast to kill her attacker. Sam opts to trade with my Huntbeast, so the Gorger survives. Over to me, I attack with both Yeva and the Wurm- since her enchantment will tap one of my guys anyway, I might as well get my money’s worth on the attack. Surprisingly, Sam takes it and goes down to 3. Over to her, she then plays a Duty-Bound Dead and swings with the Servant. I flash in a Centaur Courser chump blocker to explode for the team, then counterattack with both beaters after watching her end with a Tormented Soul. Now Sam is forced to thin out her exalted ranks, offering up her Knight of Infamy and Duty-Bound Dead (without the mana to regenerate them). I play a Ranger’s Path for redundant land, and pass.

Sam still manages to swing for 4 next turn with the Tormented Soul, putting me at 3. I keep the heavy pressure on with Yeva and the Wurm for 9, forcing Sam to chump another pair of creatures. Although she manages to Pacify the Gorger on turn 10, her only creature can’t block and she’s run out of cards to play.

The Tormented Soul makes an early return appearance here, coming down on turn 1. It’s followed by a turn-2 Knight of Infamy and turn-3 Duty-Bound Dead/Aven Squire combo. I’ve got a handful of midrange options and kept them, not counting on Sam’s deck to get a blinding start off this time. When she plays a turn-4 Duty-Bound Dead and swings with the Knight, I’m down to 7 and forced to play a Yeva’s Forcemage to get a ground presence.

The beats continue as I’m hitting every land drop desperate to play an Essence Drain, but at this point it hardly matters. With two evasive options on the board- the Squire and the Soul- Sam effectivly has me in checkmate. She Murders the Forcemage on turn 6 for spite, then swings for the kill on me to finish a majestically one-sided affair.

This time it’s my turn to field an optimal opener as I slam down an Arbor Elf off my leading Forest. Sam plays a Plains, then translates that into a Warclamp Mastiff. Back to me, the Elf sets up a second-turn Centaur Courser as I get out a turn in front. Sam plays a Knight of Glory and passes.

Now turn 3, I swing for 3 with my Courser, then drop a Spiked Baloth. Sam, meanwhile, finds trouble in the form of a Vampire Nighthawk, attacking for 2 with the Mastiff. Thanks to the Elf and consistent land drops, however, I’m simply able to Essence Drain away her Nighthawk then swing for 7 to drop her to 10. Her following Angelic Benediction seems almost laughable, but it does enable a 4-point counterattack to leave me at 17.

I attack again for the full measure on turn 5. Sam chumps the Courser with her Mastiff, taking 3. I then add a Garruk’s Packleader. All Sam has left is a Blood Reckoning, no impediment at all as I swing for the kill on turn 6.

From what I’d heard and read leading up to the actual match, I was suspecting that Wild Rush would be the deck that evened the ledger between the good and the mediocre for Magic 2013. The first two decks reviewed, Depths of Power and Sole Domination, were fun and innovative constructions that were quite different from one another. Sadly, Mob Rule was a disappointment- was Yeva’s deck to follow?

Fortunately, I had no such experience with it. Lucky enough to get Yeva into play in our opener, I had a blast being able to threaten from across the table with instant-speed beaters either as sudden blockers or end-of-turn surprises. Longtime readers will know that creature decks aren’t really my preferred archetype, but this was an intriguing new wrinkle on the standard.

Of course, saying that begs the question of how the deck plays for all the other games where Yeva never touches the table. The good news here, too, is that Wild Rush delivers. Although the deck has more than its fair share of expensive cards, if you manage to find some of your ramping options you can get a string of beats down that your opponent will be hard-pressed to deal with. Indeed, this match exposed the weakness of the impressive Sole Domination deck- defense. Since that deck is built around exalted with a host of 1-toughness creatures, a hard-charging deck with resilient bodies can put it on its heels. I saw this at varying times when I was facing a hammering from Sam’s exalted support and lone, unblockable attacker, yet was able to force her to chump when the thundering herd swung right back across the table.

While fun to play in either ‘mode,’ the deck is certainly not without its weaknesses. Ramping was spotty, particularly considering that the ramping spell costs four mana to play, so it’s of no help until you get there, leaving the Elves as your only early-game accelerant. The deck similarly skimped on its “on-theme” card, Yeva’s Forcemage, whereas other decks gave you two. And of course, despite the splash of Black the removal was a bit Spartan. Sure, it might be hard to find much room for the double-Black Murder, but Prey Upon is a shoe-in in a deck filled with fat.

Hits: Yeva, Nature’s Herald changes the entire complexion of the deck in a really fun and engaging  way; solid stream of beats are a blast to steamroll an opponent with

Misses: Both ramp and removal suites are a bit underwhelming and could stand some improvement