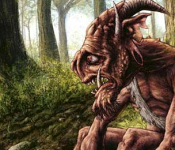 Like it or not, it is an aspect of the human condition that seeks to create not from scratch, but rather to modify or interpret. There are few elements of the Magic multiverse that do not, in some way, draw upon cultures already established in the much more mundane world of Earth. At the dawn of the game, this was done quite unabashedly with Magic’s first expansion, Arabian Nights. Since then, however, the element of the real has been increasingly concealed beneath the veneer of the fictional.

Exhibit A: flavour texts. There were days one where finding snippets of poetry and prose from sources ranging from Homer to Shakespeare were not at all uncommon, but those days are a thing of the past. Although they’ve made a very occasional return when occasion permits (see Diminish), this is by far the exception rather than the norm.

So too do we see the element of the real in the worlds and landscapes of the game. Although the world of Arabian Nights has been “ret-conned” to be the plane of “Rabiyah,” we’ve seen a number of sets draw quite heavily on lore and iconography of existing human cultures. Ice Age drizzled its frozen treat with bits of Norse heritage, while Mirage borrowed quite heavily from the African continent to weave its tapestry. One of the most notable expressions of type is the world of Kamigawa, clearly drawn from the wealth of lore surrounding medieval Japan. Other sets simply weave a little in here and there as needed, like strips of newspaper in a bird’s nest. While Grixis would resemble no landscape familiar to this planet, Bant was characterised in design by Wizards as “Camelot in the savannah” and shaped accordingly. The Nacatl of Naya too had their look and feel shaped from Human society, in their case Mesoamerican. And this fall as we Return to Ravnica, you might recall the Slavic feel present in the original set. In crafting Lorwyn, Wizards turned to another real-world mythology: Celtic.

While design came into Lorwyn with its goals, so to did the creative team. Metal world, Japanese-inspired world, city world, post-apocalyptic world—each of these environments had their own distinctive stamp, but none of them were solidly grounded in traditional fantasy. Combine that with a desire to swing the pendulum back from the crazy chaotic feel of Time Spiral block and you have a sense of where the creative team wanted to go. They were eager to build a world steeped in a more traditional fantasy. They wanted a simple world with a calm not seen in a Magic world in many years. Sure there would be fighting—this is Magic after all—but set in a context more of squabbles among neighbors and less like the all-out world war seen is many sets.

For Rosewater as well as the other members of R&D (including Creative), Celtic mythology offered a lush and rich tapestry to draw from which had a more “traditional fairy-tale” feel to it.

In the opening review of the set (Elvish Predation), we looked at the unfortunate parallel between Lorwyn and RMS Titanic when looking at expectation and outcome. Lorwyn was crafted with the very highest of hopes, but in that opening piece we included some quotes that seem almost tragic in hindsight. Here’s one more:

The big point I want to make is that I feel the environment of Lorwyn is a wonderful breath of fresh air that returns a flavor to the game not seen in a number of years.

As we now know, the chance in pacing failed to resonate with players, and Wizards considers Lorwyn to have been a failure in part due to its “overly light” tone. For us card-carrying members of the Vorthos community, however, who perhaps show just a little bit of fatigue at the “whole world’s coming to an end/good guys fighting back” formula present in recent sets (see: Alara, Zendikar, Scars of Mirrodin, Innistrad), we pause for a moment and reflect on this most unusual set. In that light, perhaps it wasn’t such a “failure” after all.

Now, about those Goblins…

Something New to Smash 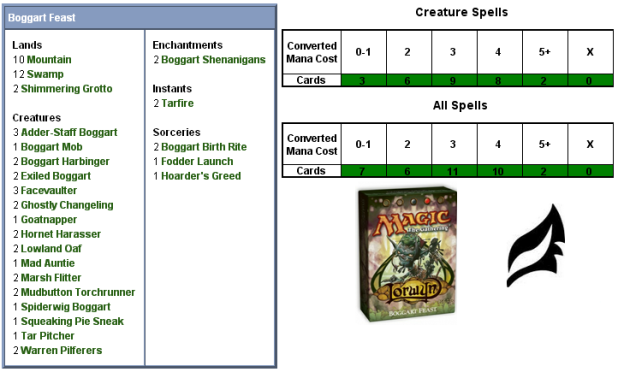 The “chocolate and peanut butter” combination found in the appropriately-named Boggart Feast is Red and Black. Although the former certainly has been long-established as the home of the Goblin tribe, the pairing of the two is not entirely without precedent (see: Marsh Goblins). We’ve also seen the occasional exception dip into Black’s slice of the colour pie, such as with state of body (Festering Goblin) or state of mind (Goblin Turncoat). But if the Elves got “population matters” and the Merrow had tapping/untapping shenanigans, where does that leave the lowly Boggart? Apparently, the life of a Goblin on the plane of Lorwyn is as precarious as on any other, and this is a deck that expects to see a lot of Goblins fall to “misadventure.” But they’ve a few tricks of their own, as well.

Case in point is our opener, the one-drop Facevaulter. The deck gives you a trio of them, and while they stick around as a lowly 1/1, you can sacrifice a Goblin to them to pump them up for a turn. Of course, few things are ever straightforward with Goblins, and the next creature- the Exiled Boggart– is a poor choice of sac fodder. When it dies, you lose a card in hand (assuming you have any left), but this is sadly the price Black plays for having a two-mana 2/2.

The next creature up is the Adder-Staff Boggart, another of the deck’s three-of’s. There’s little on offer here other than unpredictability: thanks to clash, you’ll sometimes be getting a two-mana 2/1 (underwhelming), and sometimes a 3/2 (very good). Finally, there’s the Squeaking Pie Sneak, another of the lateral cycle of cards we’ve seen in these decks which allow you to get a more expensive creature out sooner if you reveal an appropriate card from your hand. The tradeoff is reasonable- a 2/2 body with fear is a welcome sight at nearly any point in the game if you’re up against an off-colour deck.

Boggart Feast counters expectations by filling in the mana curve most heavily in the three- and four-drop slots, as opposed to the customary Goblin swarm deck. A pair of Mudbutton Torchrunners make excellent sacrifice offerings, given that when they die you get a free Lightning Bolt. A pair of Boggart Harbingers let you tutor up any Goblin card- creature or otherwise. A pair of Ghostly Changelings are essentially Shades, letting you pump their power and toughness through an investment of mana. Shades are typically weakened by inclusion in a two-colour deck, but given the higher cost of activation here that vulnerability is largely mitigated (since you have to tap two mana per use, the effect is largely the same on a one- or two-colour deck).

The next pair of creatures have enters-the-battlefield effects of widely varying utility. The Spiderwig Boggart gives a creature fear  for a turn and as such is conditionally useful. The Goatnapper, on the other hand, is a flavour win- but alas the environment isn’t teeming with Goats. Instead, see this one as a vanilla 2/2 for three, not a great deal. The last of the deck’s three-drops is the first rare: Mad Auntie. A “lord,” she grants all of your Goblins a flat +1/+1 bonus, and can regenerate them to boot. One part wise indeed!

The sac/effect engine gets some additional offerings amongst the deck’s four drops. The Tar Pitcher turns any Goblin into a free Shock, which is just the ticket once the red zone has bogged down and you can’t get through for constructive damage. The Marsh Flitter is the unusual non-Goblin creature here, but her sac ability also requires Goblins to power. For her part, she becomes a 3/3, and in the air that’s a fairly substantial body. If you’re worried about running low on fodder, she brings along a pair of 1/1 Goblin Rogue tokens for just this sort of occasion. Like the Faerie, the Lowland Oaf also has uses for Goblins- picking them up and launching them. Though the cost is steep- the Goblin is sacrificed at the end of turn- getting up off the ground can make all the difference. 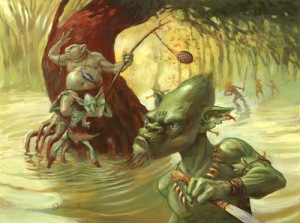 For added removal, you have a pair of Hornet Harrassers, 2/2 Goblins that give another creature -2/-2 when they die. This makes the cost of sacrificing Goblins much more palatable, as you can take one of your opponent’s creatures with it. Finally, while the Boggart Mob demands a tribute when it enters the battlefield thanks to its champion keyword, it can help generate some additional 1/1 Goblin tokens. Of course, if you’re smacking your opponent for 5 damage a turn, you won’t be needing all that many…

The deck’s final creature rests at the very top of the curve. Warren Pilferers are sizable 3/3 bodies in a deck filled with generally smaller fare, and they are a genune two-for-one as they snare a card from your graveyard for you. If that card happens to be a Goblin, so much the better as they’ll be ready for a possible surprise attack.

As Disgusting as it is Deadly

As with the other Lorwyn decks, Boggart Feast is fairly creature-heavy, leaving little room for an expanded noncreature support suite. Still, you’ve a number of useful options here, particularly with removal. A pair of Tarfires are essentially a rebranded Shock, with the bonus of being a Tribal Goblin spell (and therefore fetchable with your Harbinger if needed). If you need to take down something bigger, you have a singleton copy of Fodder Launch. Although it too requires you to sacrifice a Goblin, it can take down nearly anything you might be up against.

For some added attrition, you have a pair of Boggart Shenanigans available to you. These give you a little extra mileage out of the heavy losses of Goblins you’re expected to incur in the course of a game. You’ll want to play these as early as possible (board state permitting, of course) so as to get the most mileage out of them.

The last few spells get you cards into your hand. A pair of Boggart Birth Rites return any Goblin card from graveyard to hand.  Clash gets one last look with Hoarder’s Greed, though hilariously enough here a ‘win’ can occasionally be undesirable thanks to the repeat of life loss.

Interestingly enough, Boggart Feast has something the Elves and Merrow didn’t- access to Shimmering Grottoes for mana fixing. Aside from that, though, it’s all Swamps and Mountains. We’ll light a fire under t he Goblins and get them moving towards the battlefield, then check back in a couple of days and let you know how they performed.