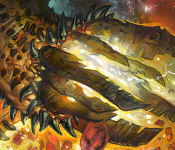 Once again we’re back in the arena, ready to do battle with the Planechase 2012 decks. I’m piloting Primordial Hunger, a Jund-themed deck that stakes its flag on the devour mechanic. Jimi, seated to my left, is rocking the Savage Auras deck, while Sam’s taking a turn behind Night of the Ninja. Here’s how the evening unfolded…

With Sam leading things off, she flips the game’s first Plane: Gavony. She then adds a Swamp and Tormented Soul, a solid start for her deck. I lead with a Khalni Garden, happily putting a 0/1 Plant token into play as a down payment on my devouring creatures-to-come. On a lark, I give the planar die a roll, but come up with nothing. Jimi opens with a Forest, but breaks the streak by simply passing.

Next turn, Sam swings in on me for 1 with the Soul, then follows with an Augury Owl to help give some guidance to her next four draws. I add a Viridian Emissary, then blank again on a die-roll before Jimi deploys a Dreampod Druid. She, too, rolls a blank.

Now turn 3, Sam doubles down on the attack to put me at 17 life, then deploys a Sai of the Shinobi. An Inkfathom Witch follows, and on goes the Sai. Back to me, I lead by rolling the die again, and this time score a hit! Just like that we’re bidding adieu to Gavony, and headed for the Furnace Layer. This one has an immediate effect, and random chance indicates Sam. She discards a Terramorphic Expanse, and takes 3 damage for her trouble. I then attack in on Jimi for 2 with the Emissary, then after adding a Fractured Powerstone I roll the die two more times- both blanks, alas. When it’s over to Jimi, Sam gets chosen (by random die roll) a second time, throwing away her last card in hand- a Jwar Isle Refuge, and another 3 life points lost. Jimi then girds her Druid with a Rancor, attacking in on Sam for 4 to see her end the turn at 10. Jimi then rolls the planar die and hits Chaos, tapping into the mighty power of the Furnace Layer to melt my Fractured Powerstone into slag. She rolls again, and the Planeswalker symbol comes up on her third try. Jimi flips over Chaotic Æther, and this one’s nasty- for our next plane, any blank roll becomes Chaos instead. She then turns over Astral Arena, which alongside its peculiar attacking/blocking restrictions promises a free Pyroclasm with ever Chaos roll.

Sam stays on the offensive in turn 4 with an attack by the Witch. Having missed her first land drop, she taps out for a Whispersilk Cloak and passes. I attack in for 2 with the Emissary, then roll the planar die. It’s a blank, which means a 2-point blast across the board on all our creatures, clearing the board of them. On a happier note, the death of the Emissary means I can go get the Mountain I’ve so desperately needed. Picking up the die, I roll another blank (doing nothing), then hit the Planeswalker symbol again to take our leave of the place. Turning over the top card of my deck, we’re off to scenic Prahv. Over to Jimi, she plays a replacement Dreampod Druid, then enchants it with the Rancor she got back to hand after the boardwipe sent it to the graveyard. She rolls a blank on the die, and ends her turn.

Now turn 5, Sam adds a Liliana’s Specter, forcing me to discard a Forest as Jimi pitches Krond the Dawn-Clad, a fine creature if she wasn’t stuck on three lands. Sam then equips the Sai to the Specter. She rolls a blank and passes. For my part, a lucky die roll sees us leave Prahv and head for Jund. I then play a Mudbutton Torchrunner, offering it up to the plane’s devour as I next play a 6/6 Brindle Shoat. The 3 damage the Torchrunner deals when it dies picks off Jimi’s Druid, putting her back to 0 creatures in play, but at least she gets the Rancor back. Passing to Jimi, she nets a pair of 1/1 Goblins off of a Chaos roll, then enchants one of them with the Rancor.

Continuing our whirlwind tour of the multiverse, we’re off to Mongseng’s lovely Kharasha Foothills next, as Sam kicks off turn 6 with a die roll. She then attacks me with the Specter for 3, putting a token copy into play to carve some life off of Jimi as well (in addition to another discard!), but only 2 as the token doesn’t copy the equipment. She then rolls the die again, coming up with a blank, then one more time for a Chaos she declines to use. Over to me, I begin with a Kazandu Refuge to go up 1 point of life, then attack Jimi for 6. Thanks again to the Foothills, Sam’s getting hit with a token copy and goes down a point, since the token copy also doesn’t benefit from any +1/+1 counters on the card it’s copying. For her part, Jimi chumps the Shoat with a 1/1 Goblin (the one without the Rancor). Passing turn, Jimi gets lucky again off the die, and our next port of call is Talon Gates. This is good news for the White-starved Jimi, who immediately suspends a Hyena Umbra and Kor Spiritdancer. She then tries a couple of die rolls (blanks), and attacks in on Sam for 3 to leave her at 6.

Now turn 7, Sam goes ahead and suspends Vela the Night-Clad, though no-one at the table is under any illusion that Sam’s going to live that long. Grabbing the planar die, she then takes us to Glen Elendra after first rolling a blank. Back to me, I send in the Shoat to put Jimi down to 8 life, then add a Beetleback Chief and his cohort of 1/1’s. I’m not interested in swapping creatures with Jimi (thanks to Glen Elendra), but more than happy to leave the place. Alas, my rolls come up blanks. Over to Jimi, her Hyena Umbra unsuspends and gets placed on her Rancor’ed Goblin token. She takes a futile roll of the die, then summons a Thran Golem.

Sam’s in survival mode, and can’t even upgrade her creature thanks to Glen Elendra as the Shoat she’s take from me would be tapped. She rolls the planar die three times hoping for a miracle, but ends up with nothing. For my part, I clear Jimi out of the game with an Overrun. Unable to find anything to save her, Sam follows shortly after.

As we alluded to in the closing remarks of our first-half deck analysis, Primordial Hunger and Savage Auras have a lot in common. Both decks tend to focus on concentration of power into one or a small number of powerful attackers. Savage Auras looks to do this through creature enchantments. Primordial Hunger, on the other hand, accomplishes this aim through the use of the devour mechanic. Both share a comparable amount of risk/reward, the danger of ‘putting all of your eggs in one basket.’

To offset the vulnerability exposed by such a strategy, both decks look to compensate you in other ways such as card drawing or creature token generation. Where Primordial Hunger pulls ahead is in secondary victory conditions. In the above game, I devoured but once, and that was through a Plane rather than a keyworded creature. And while in fairness both of my opponents did struggle somewhat in developing their manabases, my deck took Jimi out in a very old-fashioned manner: a number of small creatures buffed up with an Overrun.

To its credit, Primordial Hunger looks to use the creature tokens you tend to accumulate quite a bit more effectively than the Saprolings of Savage Auras. In our pre-game friendly match, I was able to get a swarm of small creatures and tokens on the board, use Hellion Eruption to cash them in for 4/4’s, then swing for overwhelming damage the next turn when I rolled the necessary Chaos on Kessig (giving all my creatures +2/+2 and trample), followed by the Overrun. Brutal.

Given that the Planechase 2012 environment has tended to be somewhat removal-light, Primordial Hunger has the tools it needs to really spread its wings. The deck was a blast to pilot, and it never felt like I was taking too big a risk in adhering to its central strategy. Indeed, in playing against it I’ve had to get very creative to kill its closers (like using Mass Mutiny to steal Sam’s Preyseizer Dragon and ramming it into Jimi’s Baleful Strix in our review of Chaos Reigns).

Hits: Secondary victory condition rewards you for doing what the deck already wants you to do to support its primary victory condition if you don’t manage to assemble your massive creature; good diversity of effects of Planes; commendable focus for a mostly singleton deck; consistent manabase

Misses: Strategy is sill vulnerable to spot removal or bounce effects, and can leave you open to a blowout in terms of card economy