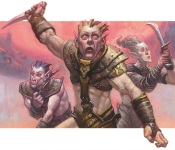 It’s our first foray back into the world of Planechase in nearly two years, when we reviewed two of the decks and left two for later. How have they stood the test of time? I’m in with Strike Force, a Boros-coloured deck with plenty of splashy burn effects, while Jimi’s volunteered to try and stop me in my tracks. In her hand is Metallic Dreams, an artifact-themed deck that plays with all five colours. Which deck will find the will to prevail?

Jimi and I exchange opening land drops with her on the play, then on turn 2 she plays an Ancient Den, then a Pentad Prism with two counters (thanks to sunburst). I drop a Plains to match my Mountain and pass. Next turn Jimi brings out the game’s first beater in an Arcbound Slith, an uncomfortable sight on an empty board with my first creature not yet deployed. I waste little time in showing it the door with a Lightning Helix, putting me to 23 life. For my part, I play a Mountain and pass.

Now turn 4, Jimi cashes in a charge counter from her Prism to play a full-strength 4/4 Etched Oracle. Although she’s left a mana open and can trade it in for card draw, I still don’t want to leave a 4/4 on the table. Tapping three mana, I play the Duergar Hedge-Mage to destroy it. As expected, she cashes it in for three cards, but at least it’s off the table. Back to Jimi, she next plays a Wizard Replica. I drop a Sunhome, Fortress of the Legion, then attack in with the Hedge-Mage. Jimi declines to block it, and I use Sunhome to give it double strike, leaving Jimi at 16.

Jimi’s next play is the turn-6 Vedalken Engineer, after she sends the Wizard flying in for 1. Back to me, I add a Boros Garrison, then repeat my nifty trick with the Hedge-Mage to put Jimi down to 12. Next turn, Jimi again attacks with the Wizard, then plays an Arsenal Thresher. She reveals four artifacts from her hand (Etched Oracle, Bosh, Iron Golem, Pentavus, and Sarcomite Myr), meaning the Thresher is now a 6/6. I simply play my Balefire Liege and pass.

Preparing for her turn-8 attack, Jimi Whiplash Traps my Liege and her Vedalken Engineer (as returning my Hedge-Mage to hand would have been unwise). That leaves her open to swing in for 7 with the Wizard and Thresher, and I’m down to 14 life. Back to me, I replay my Balefire Liege, then add a Boros Signet before passing. Jimi adds another Etched Oracle after an attack with the Wizard, then sees it all disappear when I untap and cast Insurrection for lethal.

Jimi opens on the play with a Mountain, which I match with a Plains. Next turn she adds a Silver Myr off of a Seat of the Synod, while I bring out a Boros Signet alongside a Mountain.

Now turn 3, Jimi next deploys a Serum Tank after a 1-point attack with the Myr. Back to me, I tap out for a Glory of Warfare and pass. Looking to maximise the Tank, Jimi’s next play is the Nuisance Engine, whose Pests can add quite a number of counters to the Tank. Seeing this is enough to move me to act, and for my part I play a Kor Sanctifiers with kicker to smash the Tank good and proper.

An Iron Myr is the most Jimi can manage on turn 5, having now missed two consecutive land drops. With a pair of mana Myr that’s not such a problem, but that’s where my Cone of Flame comes in. I kill off both her mana dorks, doming her for 3 in the process. I then attack with my Sanctifiers, and Jimi chumps with a Pest. Jimi’s turn 6 is a blank, so I go ahead and add a Bull Cerodon to the board. Swinging in for 11 thanks to the Glory of Warfare, Jimi makes a Pest and chumps the Cerodon, taking 4 off the Sanctifiers to go down to 16.

On her heels, Jimi makes another Pest on turn 7. I seal the deal with a Chaos, letting my beaters slam in for 11. I follow it up with an Arc Lightning to the face for 3, and Jimi concedes after the draw.

That’s two in the bag, with Jimi’s slower artifact deck not getting the time it seems to need. We trade land drops again in our opener, then JImi drops a Tree of Tales and a two-charge Pentad Prism on turn 2, while I deploy a Boros Swiftblade. Next turn Jimi gets another artifact land into play with the Seat of the Synod, letting her deploy her Serum Tank. For my part, I carve 2 off her life with the double-striking Swiftblade, then bring out some ramp of my own with the Boros Signet.

Now turn 4, Jimi goes large with the Master of Etherium, who is a very hefty 5/5. I play a Mountain and pass. She then adds an Arsenal Thresher, revealing Pentavus and Bosh, Iron Golem from her hand to give it a pair of +1/+1 counters. She then attacks for 6 with the Master, but I’ve got an Order in hand and simply exile it. The tables turn as I then drop Rorix Bladewing and swing in for 6, leaving Jimi at 12.

The one-upsmanship continues on turn 6 as Jimi next brings out a 5/5 Broodstar. Considering my position, I have to ask myself if I’d be willing to trade Rorix for the Broodstar. Rorix is as big as he’s ever going to get, while the Broodstar, on the other hand, has room to grow. I make my peace with my loss, play a Congregate for a 10-life boost, then send in the Dragon. As expected, Jimi accepts the trade, and we’re back where we started. I play another Boros Swiftblade and pass. Back to Jimi, she redeems a charge counter from her Serum Tank to draw a card, then plays a Silver Myr to end her turn. I play a Hearthfire Hobgoblin, but have nothing else.

Now turn 8, Jimi plays a fully-charged Etched Oracle and passes. I send in the Hobgoblin, and Jimi blocks with the Oracle before popping it for three cards. It pays off. Jimi’s next play is a one-mana Myr Enforcer, replacing the 4/4 body she lost by eating the Oracle for cards. She then plays a Loxodon Warhammer and equips it to the Arsenal Thresher, swinging in for 7. I gang-block it with my Swiftblades, trading two for one just to clear off a threat. Still, the 7 life Jimi nets from the attack puts her right back up to a very comfortable 19. This immeidately drops to 14, however, as I play a Bull Cerodon and turn it sideways (figuratively speaking, for it has vigilance).

Jimi’s momentum continues on turn 10 as she next brings out Bosh, Iron Golem. My turn 10, sadly, is as blank as my prospects for victory. Back to Jimi, she then plays Cranial Plating, equipping both it and the Warhammer onto Bosh who then swings in for 18. That puts me at 12 life to Jimi’s 32, and under those conditions there’s only one real outcome. I scoop after my next draw.

Strike Force is a Boros deck that dares to dream big. As mentioned in our deck analysis, these sorts of decks usually populate themselves with small, efficient early beaters and back it up with burn, so that as an opponent’s defenses are put in place they get dismantled just as quickly. That keeps the traffic lanres open for offensive damage, then when the red zone at last has become hopelessly stalled out you can then use the reach burn gives you to finish the job.

That tactical core is certainly present here, but given the realities of multiplayer play it looks to apply a similar principle but with larger creatures and effects. That said, the outcome is often little different- witness the dominant performance the deck turned in for Game Two, sustaining but a single point of damage along the way. Overall, this deck has a lot of fun cards with solid overlap between them, whether it be the powerful Balefire Liege or a massive Goblin Offensive followed by Congregate. It’s a point in the deck’s favour that many of the cards operate just fine on their own, yet feel like they well belong here.

If there’s a weakness to the deck, it’s in the paucity of creatures. The selections are satisfactory in the main, but only about a quarter of the deck is creatures. That does leave the possibility open that you simply won’t draw enough offensive threats to mount an effective challenge, though this is aggravated in a two-layer duel where you don’t have the luxury of sitting back and developing your board presence. Indeed, Strike Force has the least creatures of any of the four Planechase decks, and this puts you at some mercy of the whims of fortune.

Much of the deck, too, has been selected with the planes in mind. Each Planechase deck comes with ten plane cards, and they augment the deck quite well. Whether it be refilling an empty hand (Academy at Tolaria West), instant and sorcery shenanigans (Glimmervoid Basin, Izzet Steam Maze), or giving all creatures Firebreathing, there’s plenty of octane to give your deck a turbo boost if your playing with them.

Hits: Plenty of burn and removal; having the creature population trimmed back means there’s plenty of room for big, splashy effects like Furnace of Rath and Insurrection; fairly even mana curve distribution gives you things to do each turn

Misses: Light creature count means you can starve for creatures, though removal package goes some way to mitigate this (what good is Glory of Warfare if you’ve got no creatures to buff?)