Last week we saw the opening action in what might be this season’s most dangerous division, and if the results of the first four matches are anything to go by, it’s only going to get harder from here. Intriguingly, Time Spiral block has a representative from each of its sets in the final four squaring off today, while Coldsnap is in with a fighting chance as well. No such luck for Ravnica block or Ninth Edition, which saw their champions fall in battle.

The winner of today’s clash claims their first taste of official glory as the champion of the Turian Division. They’ll then get a chance to rest and salve their wounds as we move next to the 2005-07 season’s remaining division, the Lauer. Once a champion of the Lauer has been declared, both divisional champions of the Forsythe Conference will pair off for their shot at taking down the champion of the Rosewater Conference, going down in history alongside past champions, their name in the eternal ledger.

And now, without further ado, let’s head down to the arena, for today’s clashes are about to begin!

Beyond the Grave (CSP) vs Reality Fracture (TSP)

Mulliganing down to 6, Reality keeps a land-heavy opener knowing it needs a lot of mana to function anyway. Beyond doesn’t fancy waiting, and opens up with a turn-4 Ashen Ghoul. The Ghoul eats a Grapeshot after summoning a Clockwork Hydra, but Beyond replaces it with a Gristle Grinner. Next, Beyond plays a Casting of Bones on the Hydra, kills it with a Dark Banishing, and bashes in with a buffed Grinner.

Next turn, it adds a Void Maw, and continues to wear away at Reality’s life total with a blitzing attack. Next turn it adds a Disciple of Tevesh Szat and Grim Harvests back its Ashen Ghoul to set up the win.

Desperate to claw even, Reality opens its suspend account right away. First a Keldon Halberdier, then a Riftwing Cloudskate, and then both of those pop three turns later, a triple-strength Ignite Memories which hits for 11.

For itys part, Beyond has an Orcish Healer and Gutless Ghoul hitting in for damage before the suspend pops, but gets no lower than 12. The Cloudskate draws an immediate Krovikan Rot, but when Reality hardcasts the Pardic Dragon, the jig is up.

Beyond has a solid opener with some good removal, and leads with an Orcish Bloodpainter. It seems promising- until it starts missing land drops on turn 4. Reality, on the other hand, starts strong and stays that way. A suspended Keldon Halberdier sets up a double-stormed Ignite Memories which hits for 8, while a Rift Bolt kills off the Bloodpainter. A Coal Stoker, Riftwing Clodskate (suspended), and pair of Viscerid Deepwalkers (one suspended, one not) soon follow. Reality Fracture has the game all but stitched up, and with it the match.

Or does it? That early removal-heavy hand saves its skin, even if its not the best use of some of them. The Coal Stoker eats a Dark Banishing, while the Cloudskate takes a Krovikan Rot. A Skull Catapult combines with the Disciple of Tvesh Szat to take out a Deepwalker, while it chumps with Insidious Bookworms (without enough mana to even force the random discard). A triple-Grapeshot to the face for lethal is countered by sacrificing a Gutless Ghoul, and Beyond weathers the storm.

Now creatureless, Reality draws land after land as Beyond pours on the damage. First a Gristle Grinner, then Sek’Kuar, Deathkeeper. Next turn Beyond plays an Orcish Healer, sacs it to the Skull Catapult for 2 damage to Reality’s face, and gets a 3/1 hasted Graveborn token while pumping the Gristle Grinner to boot, all giving it a 14-damage turn to take the game.

WINNER: Beyond the Grave (CSP)

Mulling down to six, Suspended gambles on a hand with Blue spells, a Swamp, and a Zoetic Cavern. Rituals, on the other hand, seems to be off to a much stronger start, leading with a pair of Greenseekers and a Fa’adiyah Seer. But when Suspended manages to find an Island, its fortunes radically turn about.

First it suspends a Reality Strobe, followed by a Shimian Specter. A pair of Paradox Hazes later and its able to unsummon/exile most anything Rituals is able to play. Rituals is caught in a soft lock, and when Suspended next trots out an Infiltrator il-Kor, it’s able to accelerate its own timetable for victory. A suspended Phthisis pops, and tags a Jedit’s Dragoons– 7 damage to the face.

With fat creatures in hand like Twisted Abomination and Bog Serpent, Rituals can’t lay down multiple creatures in a turn to try and outrace the Reality Strobe, and it’s probably futile in any event. Suspended locks Rituals down like a fly in a temporal web, and kills at its leisure.

Rituals of Rebirth is a deck filled with both fatties and weenie/token creatures, and when Suspended Sentence suspends both a Phthisis and a Festering March, things look grim indeed for Rituals. It first tries to outwait the Phthisis, playing a Fa’adiyah Seer and a Wall of Roots (which it uses for some mana to shave down its toughness), Suspended uses one of its two morphed Timebenders to add a couple more time counters.

A Infiltrator il-Kor does the bulk of the heavy lifting, and when Rituals brings out a Sengir Autocrat, it uses the other Timebender to pop it early, killing Serf tokens as the Autocrat himself gets crushed by Phthisis.

A end-game Mindstab reveals Rituals’ biggest problem- lots of White cards and not a Plains in sight. That said, it still had plenty of options- a Jedit Ojanen of Efrava and the possibility of Dread Returning Teneb, the Harvester (dumped in the graveyard early by the Fa’adiyah Seer), but Phthisis was a Sword of Damocles all game. Rituals falls, and Suspended Sentence advances!

Although the only early creature Susended Sentence lands is a Deathspore Thallid, it outraces Beyond’s Orcish Bloodpainter when Suspended uses Clockspinning to add a third spore counter, letting it pop off a Saproling and then eat it to kill the Bloodpainter. It next hardcasts Mindstab after suspending a Reality Strobe to thin out its opponent’s hand a bit.

Beyond has hardly been idle, however, and the Mindstab does little damage- it simply discards a Death Spark, an Insidious Bookworms, and a superfluous Mountain, buying back the Spark at the next opportunity. Thanks to a timely Balduvian Dead, Beyond cuts Suspended in half but even the Dead is soon solved by the currents of time.

With Clockspinning in hand and a pulsing Reality Strobe, Suspended then sets about to work on killing off Beyond’s land, starting with the Mountains then moving to the Forests, since it has a ton of Swamps in play. A Paradox Haze kicks this into high gear, crushing a land a turn. Soon, Beyond is whittled down to next to nothing, though Suspended has managed precious little damage. Once it resolves and hatches a Deadly Grub, though, the game is done.

Beyond goes for the quick kill with a Void Maw cheated out with Dark Ritual, a frightening sight early in the game when all Suspended’s managed to do is suspend a Mindstab. Luckily, thanks to an early Terramorphic Expanse Suspended can pay the cost of a Death Rattle through delve. It also Ichor Slicks a Gristle Grinner, lands a Paradox Haze, and then cranks out a pair of Infiltrator il-Kors.

Stern stuff, but Beyond is sterner- it deploys a Deepfire Elemental to keep the damage flowing, and then Grim Harvests back the Void Maw. It takes this second one easily.

A close-cut final game of the match, and both decks can see the golden ring right before them. Sadly, only one can advance, and so it’s come to this.

Beyond leads with an Insidious Bookworm which then gets enchanted with Casting of Bones. Suspended, for its part, suspends a turn-2 Infiltrator il-Kor followed by a Festering March. It solves a Gristle Grinner with an Ichor Slick, and lands a Paradox Haze to keep things humming along smoothly. Along with the Clockspinning in hand, it has little difficulty manipulating time to its advantage, such as when it picked off a Orcish Bloodpainter.

A hardcast Mindstab empties Beyond’s hand, including the loss of a Dark Banishing. It finds another, however, in time to neuter the Infiltrator, and Soul Burns out an Unblinking Bleb after it unmorphs (Suspended also had a morphed Zoetic Cavern, but was tapped out).

Led by the ill-fated Grinner and an Ashen Ghoul, Beyond manage to work Suspended down to 8, and the game stalls with Beyond at 4 life. A hardcast Nihilith puts Beyond on a one-turn clock, and it has no answer.

To the surprise of many, it’s Suspended Sentence with the win for divisional glory! It’s been hard-fought, but now three of the four divisions have selected their champion. We’ll soon have the fourth and advance towards the inexorable conclusion, but for today we proudly present: 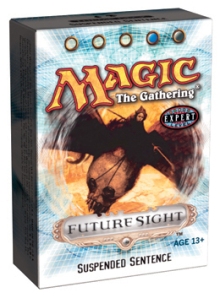