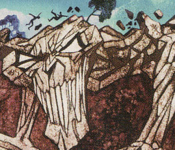 Throughout the course of our Mirage Theme Deck reviews, the name Frank Gilson has been mentioned more than once, mainly as the member of R&D that collaborated with mothership columnist Jay Moldenhauer-Salazar on Night Terrors, and with MTGO tourney winner Markus Pettersson with his prize, the design of Jungle Jam. Gilson re-enters our story here with our last Mirage review, the Blue/Red Burning Sky, as it was he who first put the idea to the readers of the mothership in a column in early October 2005. The five-part article series You Make the Mirage Theme Deck was the only work Gilson had ever had published there, and you might be forgiven for not thinking much of Mr Gilson on that account. But like most any employee of Wizards of the Coast there’s quite an interesting backstory to him, one which goes back to the earliest days of the game.

After Magic’s almost overnight success in 1993, it didn’t take long for organised play to begin to take root. Within two years of the release of the game, the concept of a “Pro Tour” was first being mooted. Taking hold in 1996, the first Pro Tour kicked off in New York City in February before stopping at Los Angeles (May) en route to its final event in Columbus in July, with the World Championships to follow in Seattle just over a month later. Although teams of professionals are much more established now with top-flight players hailing from commercial entities/content providers such as Star City Games, Channel Fireball, and BlackBorder, the earliest teams were simply groups of players and friends with a common goal- to place well on the fledgling organised play circuit Wizards had put in place for their game.

It is by no means hyperbole to say that any discussion of the earliest teams is not complete without mention of the Pacific Coast Legends, perhaps the strongest and best-known stable of their day. Formed by Mark Justice, the winner of the first-ever Magic National Championships in 1995, the team collected a half-dozen of the game’s great minds of their day who resided in the Western US. One of the team’s original six? One of the best deckbuilders in the world, Frank Gilson.

Gilson certainly took much from his Pro Tour experience, but his curriculum vitae was deeper still. He was a grad student at UC Irvine studying “Mathematical Behavioural Sciences,” and soon joined the game industry. Before our story intersects with him in 2005 with the digital release of Mirage, Gilson had also worked on several other projects of some renown: Diablo II, Warcraft III, and StarCraft. He’d been a producer at Atari for their game Dungeons & Dragons: Dragonshard. And our story would come full circle once more in 2009 when he would serve as the senior producer for Magic the Gathering – Duels of the Planeswalkers.

However impressive his pedigree, our final deck today was not created by Frank Gilson. Instead, he served as our guide as we- the Magic-playing community- built it piece by piece. The first poll went up on 06 October, 2005, asking simply what colour pair the community wanted to see. When the results were announced, four days later, Red/Blue had pipped it with just over 25% of the vote. Readers were then given the option of three different themes: phasing, control, or “Two Elements: Fire and Air.” Back to the polls went the community.This time, the voting was even closer- less than 2% stood between first place and runner-up, but “Two Elements” it was! The next trio of polls let readers pick the deck’s two rares, its creatures, and spells.

With the guidance of Gilson, the community had spoken, and Magic: the Gathering Online had Burning Sky.

Run From Every Lizard 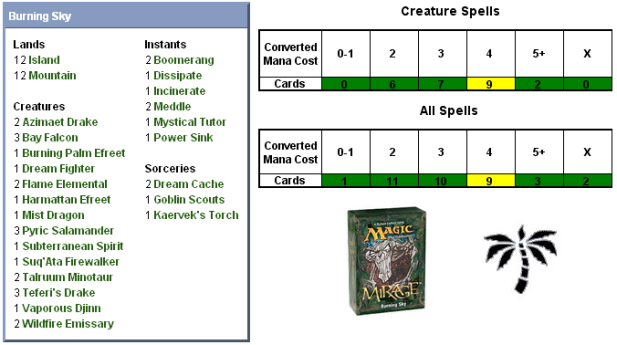 As you might expect from a deck that harvests the elemental might of air and fire, Burning Sky has a solid element of both flying creatures and burn/direct damage. Intriguingly, there’s not a lot of the latter amongst the noncreature support- as well see, much of the damage the deck is directing will come through the very creatures themselves, above and beyond the numbers in the lower right corner of the card.

For an example we turn to the deck’s first card, the Pyric Salamander. A simple 1/1 creature, the Salamander has a built-in Firebreathing effect. Unfortunately for the Salamander, it’s one-use-only, but it gives a whole new dimension to the card. Left unblocked, the opposing player has to calculate his or her life total against the number of Mountains you have untapped. The decision to block is seldom much more palatable, as the Salamander can trade up quite highly indeed with just a few Mountains available to it. Meanwhile up in the air, Blue similarly contributes a trio of Bay Falcons, 1/1 fliers with vigilance. A bit less flashy than their ground-based counterpart, they nevertheless can get in a good string of damage against an unprotected opponent one peck at a time, and still be available to hang back on defense.

Blue runs the table on the deck’s three-drops, which of course means more fliers! Leading the way are a pair of Azimaet Drakes. They in essence combine both of the previous two creatures in one package- a flying body with a limited Firebreathing effect. Sure you can’t convert all your open mana to damage at a 1:1 ratio, but you can get in an extra scratch when needed. The 3 toughness is nothing to sneeze at, either, making this Drake a fairly robust blocker. Next we have a trio of Teferi’s Drakes. For the same cost you get a 3/2 body, though you lose the very limited power pump ability. To balance this package these also have the phasing ability, meaning that every turn their either phase in or phase out and that you can only call upon them to assist you in battle for half the game. Of course, if it is any consolation, they are also impossible to target with removal for the other half of the game, so it is something of a mixed bag. Due to its complexity, Wizards has retired the mechanic (and replaced it with flickering, an un-keyworded ability found on cards like Ruin Ghost and Sudden Disappearance). For now, though, you get to enjoy it in all its glory.

The remaining two cards are singletons, a Dream Fighter and a Suq’Ata Firewalker. The Firewalker is the pinger-proof pinger, a 0/1 that dodges Red spells and effects, back when tapping to do a point of damage was something Blue liked to do (see: Prodigal Sorcerer, Mawcor). The Dream Fighter is effectively unblockable, as few opponents will be happy letting you dump their blocker to the top of their library. Of course, the Fighter must be employed with care, as there are some exceptions to this (such as any creature with a beneficial enters-the-battlefield effect).

Red returns with a vengeance for the four-drops, the deck’s most overloaded drop slot. Given the absence of mana ramp, this can lead to some hand congestion, but the environment of Mirage tends to be permissive towards slower play. A pair of Talruum Minotaurs are 3/3 hasted bodies with no drawback, and are one of the stronger offensive options here. Then there’s the pair of Wildfire Emissaries, which alongside their protection from White have an unlimited- if pricey- Firebreathing. You also get a pair of Flame Elementals, which can be cashed in for a Lightning Bolt against an opponent’s creature once they’ve outlived their usefulness.

In the singleton department, we call back to Arabian Nights with some Efreets and a Djinn (aka “genie”). The Burning Palm Efreet gives you some repeatable direct damage against a creature as well as some aerial control. Although your ability to chain this together for large damage strings is limited both by the cost (three mana) as well as the heavy Red component, this Efreet is absolute murder against an opponent playing creatures on the smaller end of the scale (such as the flank-Knights of Ride Like the Wind). The Harmattan Efreet is the exact opposite- a flier itself it also grants flying to another creature for the same three-mana activation, a great way to close out the game if you have aerial superiority (as we see with the present-day Chasm Drake). That leaves the Vaporous Djinn, who threatens you with phasing if its ransom isn’t pair. But hey, a 3/4 flier for four mana was quite the bargain then, and that gave it some semblance of balance.

The deck’s two rare cards comprise its top-of-curve closers. The Mist Dragon is as difficult to pin down as the vapour its named for, being at any point in time a flier or non-flier as needed, and can phase out voluntariy (for instance, in response to removal). As a 4/4 in the air, it’s your most dangerous threat if your opponent has a heavy ground game. Equally punishing to ground-focused opponents is the Subterranean Spirit, who can set off a miniature Earthquake (one set later, this would come to be known as a Tremor). Thanks to its having protection from Red, you don’t even have to worry about it weakening itself in doing so. Although its lack of evasion means it won’t be dodging any entrenched lines, it can certainly help thin them down a bit.

A Poem of Ivory

To back up the heavy creature contingent, Burning Sky has a number of noncreature support cards which give you some measure of control over the game state. The most clear package here comes in the parcel of Blue trickery. You first have a hard counter in the form of a Dissipate (since reprinted for Innistrad), as well as a single copy of Power Sink. The trickery is in high gear with a pair of Meddles, allowing you to redirect an opponent’s single-target spell. Finally, a pair of Boomerangs let you bounce anything you like back to its owner’s hand. This is useful for all the usual reasons, both to clear out a pesky defender or to save one of your creatures from certain death.

Burn is limited here, perhaps unsurprisingly given how much of it you get in from your creatures themselves. You get one copy of Incinerate as well as a Kaervek’s Torch. You also have a mass-summon spell in the form of a Goblin Scouts, which concludes Red’s contribution to the deck. Blue adds in a bit of card draw with a pair of Dream Caches, and gives you a Mystical Tutor to help you find what you need, when you need it.

Our final step is to take Burning Sky, the deck designed by the Magic community under the careful stewardship of Frank Gilson, into battle against its enemies and see how it performs. We’ll put it through its paces, and be back in two days to deliver a final verdict. See you then!