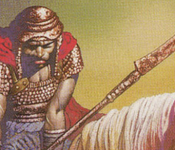 We’re off and running with Project Mirage Block, and ready for our first clash of decks. I’ll be piloting the star of the show, Ride Like the Wind, while playing the role of the villain will be Jimi. For her part, she’s selected the Red/Blue Burning Sky deck, sixty cards “filled with deception, aggression, power, and guile.” Will Jimi take the day, or will my flanking Knights grind her to power beneath their hooves?

Having been thumped in our friendly, I opt to be on the play for our first official game of the match. I open with a Mountain, Jimi following with one of her own. Next I drop a Plains, while she matches with an Island and trots out a Pyric Salamander. Her numerical superiority lasts but a moment, however, as I being out my first beater, a Burning Shield Askari. Knowing she can pump it for the trade, Jimi then attacks in for 1 with the Salamander to drop me to 19, then follows with a Teferi’s Drake.

Now turn 4, I counterattack with my Knight, then add another in the form of the Searing Spear Askari. Back to Jimi, the Drake phases out right off the bat. She flips it over, then attacks with the Salamander for another point of damage. She then adds a Flame Elemental and passes. Next turn I attack with both Knights, cutting Jimi down to 14 life. To ward off Jimi’s Elemental I add a Blistering Barrier, then tap out for Telim’Tor’s Darts. Jimi’s Drake phases back in, and it leads the Salamander back through the red zone to notch another 4 damage, putting Jimi and I even. She then adds a Subterranean Spirit, and with both my Knights being Red that’s a serious problem.

My Knights opt to stay at home on turn 6, while Jimi’s Spirit and Salamander carve out still another 4 damage in the Drake’s absence. She then adds a Bay Falcon and passes, but not before I ping her for 1 with the Darts. Next turn I take advantage of the opening in Jimi’s defense to hit back with my Knights to put Jimi down to 9. I then catch a break with an Iron Tusk Elephant, an answer to her Spirit. Alas, once I pass over to Jimi, she simply Incinerates it and attacks on through for 11 with the Bay Falcon, Spirit, Salamander, and and newly-returned Drake. At this point, the Salamander can get much bigger if Jimi pumps it, so I block it with the Barrier and as expected she puts a

into it to make the trade. The rest gets through, and Jimi’s claimed the opener.

Our next game begins much like the last, with some lands dropping into play before Jimi’s turn-2 Pyric Salamander. Right on time, I land a turn-3 Zhalfirin Knight, which stands aside as Jimi sends in the Salamander for the game’s first blood. Back to me, I swing with the Knight for 2, then deploy the Zhalfirin Commander. Undaunted, Jimi brings out the Harmattan Efreet after landing a second point of damage with the accursed Salamander.

Now turn 5, I attack with both of my flankers for 4, trying (and failing) to add in a touch more damage with an Aleatory. Down to 14, Jimi untaps (while I draw a free card off the Aleatory), drops a Talruum Minotaur, and blazes in for a 6-point attack with everything. I go down to 12 life. Next turn I counterattack for another 4 points of damage, leaving Jimi at 10. I then follow with a Blistering Barrier. Back to Jimi, she lands her second Island of the game, permitting her Efreet to give a lift to the Minotaur to sail over my Barrier. The Salamander, ground-bound, crawls through the red zone, bumps into my Barrier, and both die after Jimi pumps it. Again, Jimi has enough Mountains in play to make it into a suicidal Lava Axe so it must be blocked. This puts me at 7 and desperate for an answer. Jimi then follows up with a Bay Flacon and passes.

I don’t draw on on turn 7, but I do manage to follow up the usual 4-point attack with Sidar Jabari. At 6 life, Jimi attacks as expected with the Minotaur and Efreet combo to leave me nearly dead at 2. She keeps back the Bay Falcon to defend, adding a Flame Elemental. With two creatures, Jabari can’t orchestrate a win through tapping down her lone attacker. Still, I have an opening. Having only draw one Mountain all game, I’ve been holding onto a Spitting Earth hoping for more. Still, one Mountain is all I need to kill off her Bay Falcon. Sidar Jabari then taps down Jimi’s Flame Elemental, and the Knights thunder through for exactly lethal.

This time it’s Jimi’s turn to lead off, and she does so with a Plains. I match it, then raise her a creature in the form of the mighty Mtenda Herder. Next turn Jimi answers (again) with the Pyric Salamander, before watching me place an Agility onto the Herder before swinging for 2.

Now turn 3, Jimi Dream Caches and likes what she has, replacing two cards on top of her library. She attacks with the Salamander to scratch me for 1 then passes. Back to me, I send the Herder back across the red zone, then follow with a Zhalfirin Knight. Next turn Jimi lands the Talruum Minotaur, whose haste lets it track in straightaway. It’s now a 16-16 game. My Herder and Knight attack unopposed, then I augment my army with a Zhalfirin Commander.

Jimi attacks with both Minotaur and Salamander on turn 5, then shores up her backline with the Flame Elemental. Back to me, I send in the Knights and Herder for 6, cutting Jimi in half. I then follow with Sidar Jabari, attaining a critical mass of 2/2 flankers. Back to Jimi, she wastes little chance to pop Jabari with her Flame Elemental’s sacrifice ability, then replaces her lost creature with a Teferi’s Drake. I swing for lethal, so Jimi is forced into some concessions. Both her Salamander and Drake chump block, but all it does is but her some time. I favourably resolve an Aleatory, leaving Jimi at 3 life. She draws, then scoops.

This certainly was one of the msot consistent matches we’ve ever played. Jimi’s turn-2 Salamanders. My turn-3 Knights. The Drake in two games, the Flame Elemental in three. Swings for 4 damage… It felt a bit like a skip in the record at times, but to be fair that’s exactly what Ride Like the Wind was designed to do. With fourteen different three-mana flank-Knights, you’re almost assured of getting them out the gate starting as early as turn 3, and of course they’re only built to do one thing. By the end of the match, I began to feel like they were pinewood cars I was simply placing atop a steep ramp and letting go, watching them speed down into the red zone. Do it enough times, and the opponent’s going to lose.

That said, there are certainly weaknesses to the deck’s game plan. The relative lack of direct removal was unfortunate, especially considering the options available to both Red and White. Sadly, it was Jimi packing the Incinerate! When asked how she felt staring down Ride Like the Wind, Jimi confessed that it was “very difficult to block.” This in turn, she said, made her look to try and race me rather than ring-fence her self with defenders, playing aggressively and taking chances. Dictating the pace of play is certainly one of the deck’s virtues, and it can put an opponent off-balance.

A final note about the deck’s consistency, and it’s up to the individual to determine whether it’s good or bad- it’s almost a simpleton’s exercise in Magic. The deck is very straightforward and easy to play, and is a good one to place into a novice’s hands. Straightforward attacking is an easy strategy to grasp, and while I wouldn’t say that I was bored with the deck, I did at times admire it for its consistency (while perhaps longing for just a touch more variety). Most of that credit is due to the almost-cloned Knights.

Overall it was a great first taste of Mirage, and a deck Jimi for one can’t wait to get her hands on.

Misses: Lack of variety gives the deck a note of monotony; removal suite rather lackluster, especially given the colours of the deck