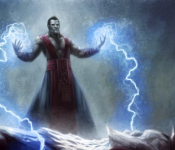 Our first foray into the temporal insanity that is Planar Chaos, I’m armed with the mono-Blue Ixidor’s Legacy. Putting it to the test is Sam with Unraveling Mind, a madness-based construction. Which of these forces out of time will prevail?

Sam leads us off with a Swamp on turn 1, while I follow- surprise of surprises- with an Island. Next turn she adds a Dauthi Slayer off of a second Swamp, while I deploy a Riptide Pilferer. Although the Pilferer makes for a nice morphing surprise, right now I’d like to get in some early beats first while Sam is still developing. The Pilferer’s discard ability is a meatball down the middle of the plate for Sam’s madness-centric deck, so my best damage can be done early while her manabase is still developing.

Now turn 3, Sam adds a Mindlash Sliver after a 2-point attack from the Dauthi, whose shadow lets him slip right past nearly any defense I might erect. The only creature I have that can get shadow is Jodah’s Avenger, and it costs six mana. She follows up with a Mindlash Sliver and passes. Back to me, I add an Unstable Mutation to my Pilferer and swing for 4. Rather than lose a card in hand, Sam opts to offer up the Sliver as a chump. Next turn she attacks again with the Dauthi for 2, then replaces her loss with an Undertaker. My Pilferer gains a -1/-1 counter from the Mutation, so this time when it swings in it’s as a 3/3. I’m a little surprised when Sam pushes the Undertaker in front of it to avoid the discard. I follow up with a morphed Fathom Seer and end my turn.

Sam attacks again for 2 on turn 5, but makes no other play. Although my Pilferer gains another -1/-1 counter, I at least have the morph to send in alongside it, bringing Sam’s damage tally up to 4. This time Sam’s ready, and uses the forced discard to play Dark Withering’s madness cost, killing my Pilferer. I replace it with a Fledgling Mawcor and pass. Next turn Sam continues the attacks with her Dauthi Slayer, leaving me at 12, then summons Mirri the Cursed. Back to me, I Ovinize Mirri and use the Mawcor to finish her off, mercifully ending what could only be a moment of indescribable agony for the rapacious, predatory legend. I then swing for 2 with the morphed Fathom Seer to put Sam at 14 life, and then summon another morhped Fathom Seer.

By turn 7, the Dauthi Slayer has me half-dead all by itself, and Sam follows up with Brain Gorgers. Unwilling to let her stabilise the board I offer up one of my morphed Seers to counter the summons. My 4-point counterattack draws us both even at 10, and then I land the Aeon Chronicler– at that moment, a very humble 2/2. Next turn Sam takes me to 8 life before deploying a Mindlash Sliver, which gets pinged away by my Mawcor- a failed gambit. With Sam’s defenses wide open, I send in the morphling alongside the Chronicler. Sam hasn’t detected the trap- doesn’t even realise that there is a trap- but her instincts are sound. She tries to kill off my Chronicler with a Lightning Axe, pitching another card in the process. I flip the Seer, paying its morph cost of returning two Islands to my hand in order to draw two cards (a Riptide Pilferer and Piracy Charm). This fills my hand to seven cards, making the Chronicler go from a 3/3 to a 7/7. Alongside the Seer, it knocks Sam’s life down to 2. With Sam nearly tapped out, I pick off the last card in her hand (a Reckless Wurm she can’t pay the madness cost for) with the Charm, and she scoops after her next draw.

Sam has the stronger start for our second clash, opening with a Mindlash Sliver, attacking with it twice before popping it to force the discard of her Gorgon Recluse, whose madness cost is right in her budget. For my part, I pitch an Island, then once my turn comes ’round again I play a morphed Fathom Seer. 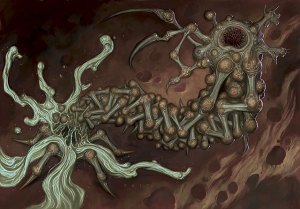 Now turn 4, Sam takes another stab at sticking Mirri the Cursed, and she sends both in on the attack to put me back-footed at 13 life. I fire back for 2 with my morphling, then cast Erratic Mutation on Mirri. Reaching for my library, I reveal an Island… another Island… a Desert… and at last a Riptide Pilferer, which kills Mirri. Annoyed, Sam Browbeats me next turn (I take the life loss) after another 2-point swing with the Gorgon, and I’m rocked down to 6. Back to me, I attack for 2 more before summoning a 5/5 Tidewalker– a benefit of having not missed a land drop yet.

When Sam attacks in with the Gorgon on turn 6, I’m more than happy to trade my Tidewalker away to remove the threat, though Sam immediately replaces it with a Muck Drubb. Back to me, I’m more than happy to play an Aeon Chronicler, this time beginning life as a 3/3. In a familiar turn of events, Sam tries to burn it out with a Lightning Axe (pitching a Phantasmagorian) only to see me flip the Fathom Seer and grow it out of harm’s way. She swings with the Drubb and I chump it with my now-spent Seer. Ending her turn, I counterattack with my 8/8 Chronicler, cutting Sam in half to 8 life. I then play another morphed Fathom Seer and pass.

When Sam tries to stick a Braingorger on turn 8, I sacrifice the Seer to keep it off the table. The Muck Drubb goes under on my Chronicler’s next attack, and I add a Fledgling Mawcor for some insurance. Sam’s turn-9 Reckless Wurm is just another chump blocker, and when she runs out of chumps she runs out of time.

A Ridged Kusite gets things going for Sam in game three, which gets in a couple of early swings. Again I drop down a chunk of life off of Sam’s turn-3 Browbeat, and I finally land a creature of my own with a morphed Fledgling Mawcor. When Sam’s turn 4 is a blank, I flip the Mawcor and snipe the Kusite, closing down a discard outlet.

Sam has another blank on turn 5, and I take advantage of the lull to mount my first attack with the Mawcor for 2 before adding a Tidewalker. It’s not long for this world, though, as Sam kills it next turn with a Big Game Hunter, which doesn’t live long enough to brag to his mates in the hunting lodge once the Mawcor picks up his scent. Once the dust settles on that sorry exhange, I replace my loss with a Primal Plasma, opting for the 2/2 flying configuration.

Now turn 7, Sam trots out a Reckless Wurm. I suit up the Plasma with an Unstable Mutation, then swing in for 7 in the sky with the Plasma and Mawcor. I then shore up my defensive position with an Aquamorph Entity, choosing the 1/5 model to give me some blocks. I spared a thought for choosing the 5/1 instead, but worried that Sam might have a smattering of burn open to her that would bring me to grief. Next turn she plays a Muck Drubb and passes. My Plasma gains the expected -1/-1 counter before leading the charge into the red zone for 6. Sam kills off the Plamsa with a Lightning Axe, pitching a Kor Dirge. Still, the Mawcor gets through for 2, leaving her at 9.

Sam’s turn 9 attack sends both of her beaters across the red zone. I absorb the Wurm with my Entity, taking 3 from the Drubb to go to 10. Back to me, I play out a couple of morphs- a Shaper Parasite and a Coral Trickster, before attacking for 2 with the Mawcor to put Sam to 7. She attacks again with both bodies, and I let myself go down to 7. Which is good, because Sam has exactly eight land in play and a Disintegrate in hand. 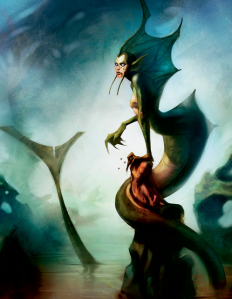 In reviewing Ixidor’s Legacy, we found that the deck had a very complicated, intricate feel to it, which was welcome after a long series of more straightforward strategies as seen in recent review of Champions of Kamigawa, Conflux, and Odyssey. Decks with a lot of moving pieces tend to get our attention, such as Coldsnap’s Beyond the Grave. To the credit of Ixidor’s Legacy, unlike Beyond the Grave it didn’t feel overcomplicated. To be certain I might hesitate before handing the deck to a beginner, but overall it had a very tangible, cohesive method to its very obvious madness. With the help of cards like Unstable Mutation and Aquamorph Entity, it gave the feeling that you were indeed sculpting a reality based on your needs at the moment and not what just was on the card. This flexibility proved to be a lot of fun.

In the end, though, for all its flash and novelty, Ixidor’s Legacy excelled at some very basic fundamentals. Big, early beaters (thanks to Unstable Mutation) can catch an opponent unprepared. Huge creatures- like the Aeon Chronicler- can close out matches. There’s nothing new or radical in these conclusions, even if they way of getting there is a bit unorthodox. Towards that end, this was a fun deck to play, and makes one wonder how enjoyable it would be to create a theme deck of as many multi-modal cards as possible (from Urza’s Avenger to Cryptic Command) and see how plausible it would be to sculpt the gamescape even futher. Preconstructed decks that inspire deckbuilding impulses with their themes and ideas are the ones that stand out over time.

Hits: Great twist on the typical creature-beat strategy; multi-modal spells give a high level of flexibility and customisation to your gameplay experience; some solid synergies between cards (Fathom Seer and Aeon Chronicler are like chocolate and peanut butter);

Misses: You have a wide variety of ways to craft an evolving board, but fewer ways to directly impact your opponent- there isn’t a lot of removal here (I had to wing it with Erratic Mutation in Game Two); risk of over-gimmickry which can leave you with little substantive to do