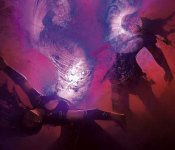 It’s a classic match of good versus evil today, as Jimi has selected Bant on the March to act as foil for Grixis Shambling Army. Will her exalted beaters triumph at swordpoint, or will their broken bodies be added to the bonepiles of Grixis?

Jimi’s on the play for the first game, and she leads with a Suntail Hawk off a Plains, while I manage a Swamp before passing. Next turn Jimi adds an Aven Squire before attacking, making sure to give her Hawk the exalted bonus so it hits for 2. I play a Mountain, and seem off to a slow start.

Jimi cracks a turn-3 Terramorphic Expanse into an Island, giving her one of each of her basics, then attacks in for 2 more taking me to 16. At the end of her turn, I landcycle an Absorb Vis to get a sorely-needed Island, which allows me to play a Kathari Screecher. Back to Jimi, she then adds Gwafa Hazid, Profiteer, reining in her Hawk for a turn to give him a chance to buy off my lone defender. I don’t give her the chance. A Sedraxis Alchemist bounces him back to her hand, after which I drop a Bone Saw and equip it to the Screecher, swinging in for 3.

Now turn 5, Jimi holds back on Gwafa, opting instead for a Rhox War Monk after sending in the Hawk for a 2-point peck. Back to me, I play a second Alchemist to bounce the War Monk, then charge across the red zone for 5. Now at 12 life, Jimi adds a second Aven Squire and cracks back with the Hawk for 3, taking me to 11. Again I send in everything in return, leaving Jimi at 5 life. I then play a Brackwater Elemental and pass.

Jimi replays the Rhox War Monk on turn 7, following up with another Hawk attack for 3. Over to me, I send in the side to keep the pressure up. Jimi’s Monk kills one of the Alchemists, while her Aven Squires get chumped. Jimi takes 2 from the unblocked Alchemist but gains back 3 from the War Monk’s lifelink, leaving her up 1 life at 6. At the end of turn, my Elemental heads for the graveyard, so I replace him with a Dregscape Zombie and Fire-Field Ogre. Next turn Jimi adds an Outrider of Jhess and passes, the writing clearly on the wall now.

I go for the kill by unearthing my Brackwater Elemental, attaching the Bone Saw to the first-striking Ogre, and attacking with the both as well as the Screecher. Her Hawk chumps the Kathari, the Monk chumps the Elemental (gaining 3 life for Jimi), and the Outrider dies to my Ogre. Up to 9 life but entirely creatureless, Jimi draws and concedes as I have plenty of damage left on the table.

Jimi again leads in with a turn-1 Suntail Hawk, which is always provokes a little concern because you don’t know how many exalted creatures are going to follow it in successive turns. For my part, I’m happy to drop a Crumbling Necropolis and pass. Next turn the Hawk pecks at me for 1, then is followed by a Valeron Outlander. I play an Island and pass. 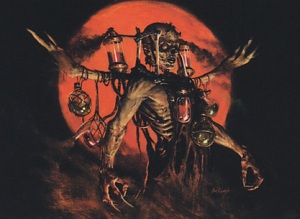 Now turn 3, Jimi attacks for 3 after fetching an Island with a Terramorphic Expanse. Over to me, I go ahead and Shock the Valeron Outlander out. I’d not wanted to do it yet- I’d have preferred to find an off-colour blocker- but I’ve missed my third land drop and have no other play with eight cards in hand. Next turn Jimi adds a Frontline Sage, whose exalted allows the Hawk to swing in for 2 and put me at 14 life. I then land my first creature with a Kathari Screecher after I draw a much-needed land.

Gwafa Hazid, Profiteer makes another appearance on turn 5, but after drawing a Swamp I play a Sedraxis Alchemist and bounce Gwafa back to Jimi’s hand. Next turn Jimi opts for another Valeron Outlander rather than a replay of Gwafa. Back to me, I take the offensive with a 2-point attack from my Screecher, then play a second Screecher to resume defensive duties.

It’s now turn 7, and Jimi fires back with her Outlander and Hawk. I block the Hawk with the Screecher, and Jimi truns the tables with a Gleam of Resistance. That also means I take an additional point of damage from the Outlander, and am down to 11. Back to me, I attack in again with my remaining Screecher, then play a Brackwater Elemental. Jimi’s down to 16 life, but still plenty ahead. Next turn she adds a Rhox Bodyguard to go back up to 19, then attacks for 3 with the Hawk alone. I’m now at 8, but have just the ticket: a Pestilent Kathari.

Jimi’s turn-9 Rhox Meditant lands her a free card, then she Pacifies my Pestilent Kathari. She then sends in her Valeron Outlander by itself, which gets the exalted bonuses making it a 4/4. I accept the trade for my Brackwater Elemental rather than take the damage, then replace it with a Kederekt Creeper once my turn rolls around. Back to Jimi, she summons an Outrider of Jhess, attacking for 4 in the sky with the Hawk. I go down to 4, but when I draw Elder Mastery I know I’ve got a shot at winning. I cast it onto my Sedraxis Alchemist, then attack the wide-open and surprised Jimi for 5. Not only does she drop to 14, but she loses the last two cards in her hand. She’ll now be playing off the top of her library. I Shock her Hawk for good measure and pass.

Jimi draws and plays an Aven Squire on turn 11, then swings with her Rhox Meditant. I trade it for my deathtouching Kederekt Creeper. Back to me, I then drop my bomb- the Blood Tyrant. Under threat, Jimi attacks with her Aven Squire, grown to massive proportions on the attack thanks to exalted but nearly useless on the defense. I have to lose something to stay alive, and offer up my enchanted Alchemist. Back to me, we each lose a life during my upkeep to the Blood Tyrant, who becomes a 7/7, and he flies across the red zone with my Screecher to take a 9-point chunk out of Jimi. That puts her down to 4 life- just enough for an Absorb Vis to claim the win.

Another game, another turn-1 Suntail Hawk and Jimi’s well underway. While I’m laying land, she follows this up with an Aven Squire, and by the time I stabilise with a Kathari Screecher, it’s turn 3 and I’m at 16 life. I get a break, however, when her turn 4 is a blank, and I crack back with the Screecher before playing a Zombie Outlander.

Now turn 5, Jimi girds the Hawk with Asha’s Favor, giving it flying, first strike and vigilance. The first ability is redundant and the other two only relevant on the attack, but to save myself the headache I bounce the bird back to hand next turn with a Sedraxis Alchemist after taking 2 more damage from it. I then fire back for 4 with the Sceecher and Outlander, putting Jimi even with me at 14. 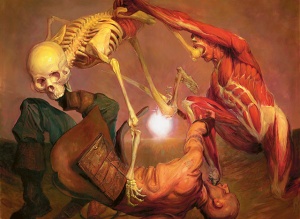 The Suntail Hawk returns on turn 6, and Jimi attacks with the Aven Squire for another 2 points of damage. Back to me, I attack with everything for 6, though Jimi blunts the attack somewhat by Unsummoning my Screecher. Still, that puts her at 10, and I then replay the Screecher. Next turn sees Jimi add a Outrider of Jhess, then attacking for 3 with the Aven Squire (taking me to 9). At the end of her turn I Terror her Suntail Hawk, to snipe her remaining aerial defender. Once my turn arrives, I bulk up the Zombie Outlander with an Elder Mastery, then attack in with it and the Screecher through open skies. The unexpected attack carves into Jimi, dropping her to 3 life and forcing the discard of a Gleam of Resistance and Valeron Outlander.

Now turn 8, Jimi solves the bulked-up Outlander with a Pacifism and passes. Back to me, I attack with my Screecher and Alchemist. Jimi trades her Outrider of Jhess for the Alchemist, going down to 1 life. Drawing nothing and never having drawn any source of Green mana, she concedes.

Although the final results give a picture of dominance, that each game ended with me at single-digit life gives an encouraging sign that these decks are well-balanced against one another. Still, Grixis Shambling Undead consistently provided me with options to do exactly what I wanted to do. Its solid removal suite game me some options to clear out enemy creatures as needed, such as when I set up a back-breaking Elder Mastery strike by picking off Jimi’s hangback Hawk. And its creatures are themselves somewhat resilient to removal given the presence of the unearth mechanic. Although aura-based removal like Pacifism still has full effectiveness, burn and kill spells can’t stop the newly-smited critter from making a one-turn comeback. It also lets me be a little more loose in combat, increasing the margin I get on trading creatures in the red zone. Mine will come back- hers won’t.

It’s a sign of the strength of the deck’s predecessor, Grixis Undead, that the biggest issue we took with the deck was the inclusion of Cruel Ultimatum. A wonderfully backbreaking card in Constructed, it was just too cumbersome for effective inclusion in an Intro Pack deck, and was a most unwelcome sight in an opening grip. Although Grixis Shambling Army is not without its expensive cards, some of the worst offenders there- the pair of Absorb Vis- are actually quite welcome thanks to their basic landcycling. That simple mechanic actually makes a huge difference in the world of tri-colour decks, and should not be overlooked or dismissed lightly. 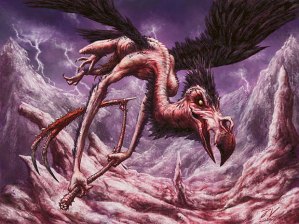 Add into this an air force that outside of a Vein Drinker the first deck simply didn’t have, as well as the beating that results from Elder Mastery, and you have a certain improvement over the original model. And while cards like Blood Cultist and Vithian Stinger surely had their uses, Grixis Shambling Army seems to eschew these slower options in favour of a bit more raw aggression. This deck is a great introduction to Conflux, and we’ll be eager to see if the set’s other decks similarly improve upon their Shards of Alara counterparts.

Misses: Still a bit heavy on the back-end of the curve, which can lead to a great than average number of suboptimal opening draws; protection ‘Outlander’ cycle heavily feast or famine- a harder-to-cast 2/2 for two mana against any non-Green deck, and painfully strong card against them