Sam and I are ready to square off in our third feature match of Odyssey decks. For my part, I’ll be piloting the subject of our current review, Pressure Cooker. A Red/Black deck with heavy removal, Sam has her work cut out for her with Liftoff. Her deck relies on flooding the field with cheap creatures which become much more robust when she hits threshold. Of course, all my removal is going to help fill her graveyard, so it will be an intriguing matchup. Here are out notes.

Sam’s on the play to start us off, and she leads with a Plains. I play a Ravaged Highlands and pass. She adds a second Plains, then a Skycloud Egg. While I simply play land and pass, she follows up with a Mystic Crusader– a silver bullet against Pressure Cooker- which swings for 2 on turn 4. Finally, I manage my first play of the game, a Pardic Firecat, which wastes no time in charging into the red zone. We’re now tied at 18-all.

Now turn 5, Sam shuts down the ‘Cat with a Kirtar’s Desire, then comes back in for 2 with the Crusader. Back to me, I play a Famished Ghoul and pass. But Sam’s on a roll, attacking in again with the Crusader. I decline the trade, and am rewarded when Sam locks down the Ghoul with a second Kirtar’s Desire. I’m now down to 14 life, and it’s not looking good. The topdecked Halberdier is welcome, however, and I play it immediately.

Now turn 7, Sam attacks with the unblockable, untouchable Crusader to drop me to 12, and time is increasingly running out. She follows up with a Beloved Chaplain which draws an immediate Flame Burst. Back to me, I attack in with the Halberdier to chip away at Sam for 3, then bring out Braids, Cabal Minion. With two of my creatures sitting around useless thanks to Kirtar’s Desire, Sam will be paying a much higher price than I will. Over to Sam, she first opts to sacrifice her Egg to leave her land and creatures intact, and sends in the Crusader for 2. Once it’s my turn, I sacrifice the useless Pardic Cat, then play a Chainflinger to whom I add a Reckless Charge. Sam can only watch in horror as my forces storm across the table, dropping her from 15 to 5 life. Next turn she draws nothing and concedes, unable to stop the last 5 points of damage in the red zone. 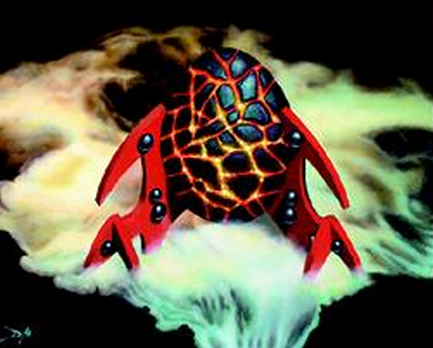 Sam and I both open with land- her with an Island and me with a Bog Wreckage– and this lets her play a turn-2 Cephalid Scout. I just play a Mountain and pass. Next turn she attacks for 1 with the Scout, then adds a Beloved Chaplain. Back to me, I summon a Shadowblood Egg, then brace for impact as Sam’s beaters come charging in again. She follows up her 2-point attack by summoning another Cephalid Scout, then adds a Skycloud Egg and passes. I pop my own Egg (drawing a card), and bring out a Chainflinger- exactly what I could use at the moment.

That bottles up Sam’s scouts well and good, but she still has the Chaplain at her disposal and she sends it in to attack. I kill it with an Engulfing Flames, and here the tide begins to turn. On my turn I follow up with a Pardic Firecat, sending it in to attack alongside the Childhood Horror, relying on the Chainflinger to keep Sam’s Cephalids under control this time. This drops her to 14 life. She find an answer for the Horror with a Kirtar’s Desire, then adds a second one to eliminate the Pardic Firecat. She attacks for 2 with the Scouts and I Chainfling one down on the way in. My turn 8 is a blank.

Now turn 9, Sam adds a Mystic Zealot. I replace my Firecat with another, attacking immediately. Sam, sensing a trap, lets it through for 2. Back to Sam, she cracks her Egg for the free card, playing a Cephalid Retainer. She then attacks for 3 with the Zealot and Scout. The Chainflinger kills the Scout, but I still take 2 from the Zealot, leaving me at 8. Over to me, I clean up with a Firebolt on the Zealot, flashing it back to finish the job. I then play a Ghastly Demise on Sam’s Retainer, and attack for 2 more with the Cat. Sam is now at 10 life.

Sam finally hits threshold on turn 11 as she plays a replacement Mystic Zealot. I deploy a Crypt Creeper, using Reckless Charge to send it crashing into the red zone. Faced with the prospect of 7 damage between that and the ‘Cat, Sam trades out her Zealot for the Creeper and goes down to 8. Back to Sam, she plays a Mystic Visionary and Hallowed Healer, the latter of which get sniped immediately by the Chainflinger. Back to me, I Chainfling the Visionary as well, then play a second Pardic Firecat. Both go bounding into combat, cutting Sam in half to 4 life. That’s effectively game, as her next-turn Aven Windreader isn’t enough to save her. 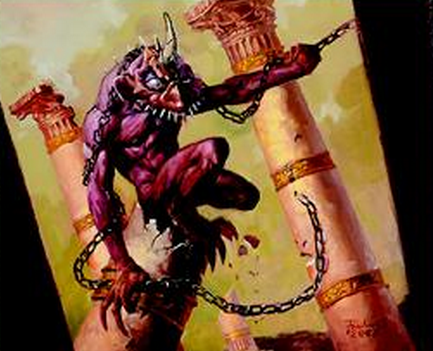 Sam is once more on the play, having had little luck with Liftoff, and leads with an Abandoned Outpost while I simply play a Swamp. Next turn she adds a Mystic Visionary. For my part, it’s a Mountain. Now turn 3, she gets a glimpse of my hand with Peek, then attacks in for 2 with the Visionary. Coming as little surprise, I kill off the Visionary with Engulfing Flames. She replaces her loss with a Mystic Penitent and passes. For my part, I play a Barbarian Lunatic and end turn.

Sam attacks in for 1 on turn 4, then plays Think Tank, an enchantment which will help develop her hand quality while moving her towards threshold. I get in my first attack for 2, but have nothing else to play. Sam looks at the top card of her library and opts to keep it, and a moment later I find out why- a second Think Tank! Since they stack, Sam’s well-positioned now to draw answers and/or fill her graveyard up. She follows this play with a Millikin and passes. All I can do is attack for 2 more.

Now turn 6, Sam’s draw shenanigans see her throw an Island into the graveyard, opting to keep her second card and draw it. She attacks with her Penitent and passes. Over to me, I go in with the Lunatic but Sam surprises me by electing to take the trade. I replace my Barbarian with a Famished Ghoul. Back to Sam, she throws a couple of cards into the graveyard (Mystic Zealot, Plains), then mills a third with the Millikin to hit threshold. She plays a Cephalid Broker and passes. I put a stop to the Broker with a Firebolt, then attack for 3 to put Sam at 13.

Sam’s Think Tanks see off an Angelic Wall on turn 8, after which she plays a Blessed Orator. I attack in for 3 more damage, then follow up with a Frightcrawler. Next turn Sam likes what she sees on top of her library and leaves it there to be drawn, attacks in for 1 with the Orator and then plays a second. Back to me, I waste little time in declaring my attack, sending in the Ghoul and Frightcrawler for 4. Sam’s 0/3 Millikin stops the Frightcrawler in its tracks, while she blocks the Ghoul with one of her Orators. This blanks my attack, but gives me the option to finish off her Orator with a Flame Burst. Instead, I opt to bring out the Dwarven Strike Force to apply some additional pressure. Although the Strike Force are at their best when you have a card to donate to give them haste and first strike, I don’t want to run the risk of losing my burn and play them as-is.

Sam’s defenses continue to improve on turn 10 as she adds a Pilgrim of Justice and a Puppeteer. Back to me, I play a Cabal Pit then send in the troops. The Strike Force is blocked by the prot-Red Pilgrim, while the Millikin blocks the Frightcrawler as before. Again Sam blocks my Ghoul with an Orator, and this time once combat is over I pull the trigger on the injured Orator with a Flame Burst. I then unleash a Ghastly Demise on the Pilgrim, and Flame Burst the Puppeteer for good measure. Back to Sam, she keeps her draw and passes, and I charge in again with everything. Sam blocks the Ghoul and Frightcrawler same as before, and uses Embolden to prevent the Strike Force damage. I then respond by killing off the remaining Orator with a Thermal Blast, and now I’ve hit my own threshold.

Sam’s turn 12 is a blank, and I go for the throat with a 10-point attack. Sam chumps her Milliken to the Strike Force, and prevents the other 5 by flashing back the Embolden. Still, it only prolongs the inevitable. Next turn Sam adds a Cephalid Broker. I Firebolt it, and send in the ground troops for lethal.

One of the things we’ve been enjoying about Odyssey’s theme decks is their support of a primary theme. One-Two Punch was fun with flashback, while Liftoff’s central gimmick about a ground swarm turning into an air force on threshold was similarly fun to play. Although Pressure Cooker’s theme- Black and Red removal- is a bit more straightforward, it certainly felt like it was well-supported by its chosen cards throughout the match.

It’s also hard to argue the deck’s efficacy as acting as foil to the set’s other decks. Its abundant removal is murder to Liftoff’s weenies, who need time to fill the graveyard before getting larger. One-Two Punch similarly relies on modest-to-moderate-sized token creatures early on, though its flashback gives it a great deal more durability. And the relative weakness of many of Pressure Cooker’s creatures keeps the odds even despite a substantial burn suite.

Overall we’ve had a hard time shaking the feeling that Odyssey’s decks are reasonably-well constructed, but a bit bland in feel overall. This is most noticeable here, in a deck with a rather uncomplicated strategy.

Misses: A bit underwhelming with theme and flavour